‘It feels like a facade’: Students chalk driveways and plant signs outside chancellor’s house at protest of Martin’s response to Islamophobia 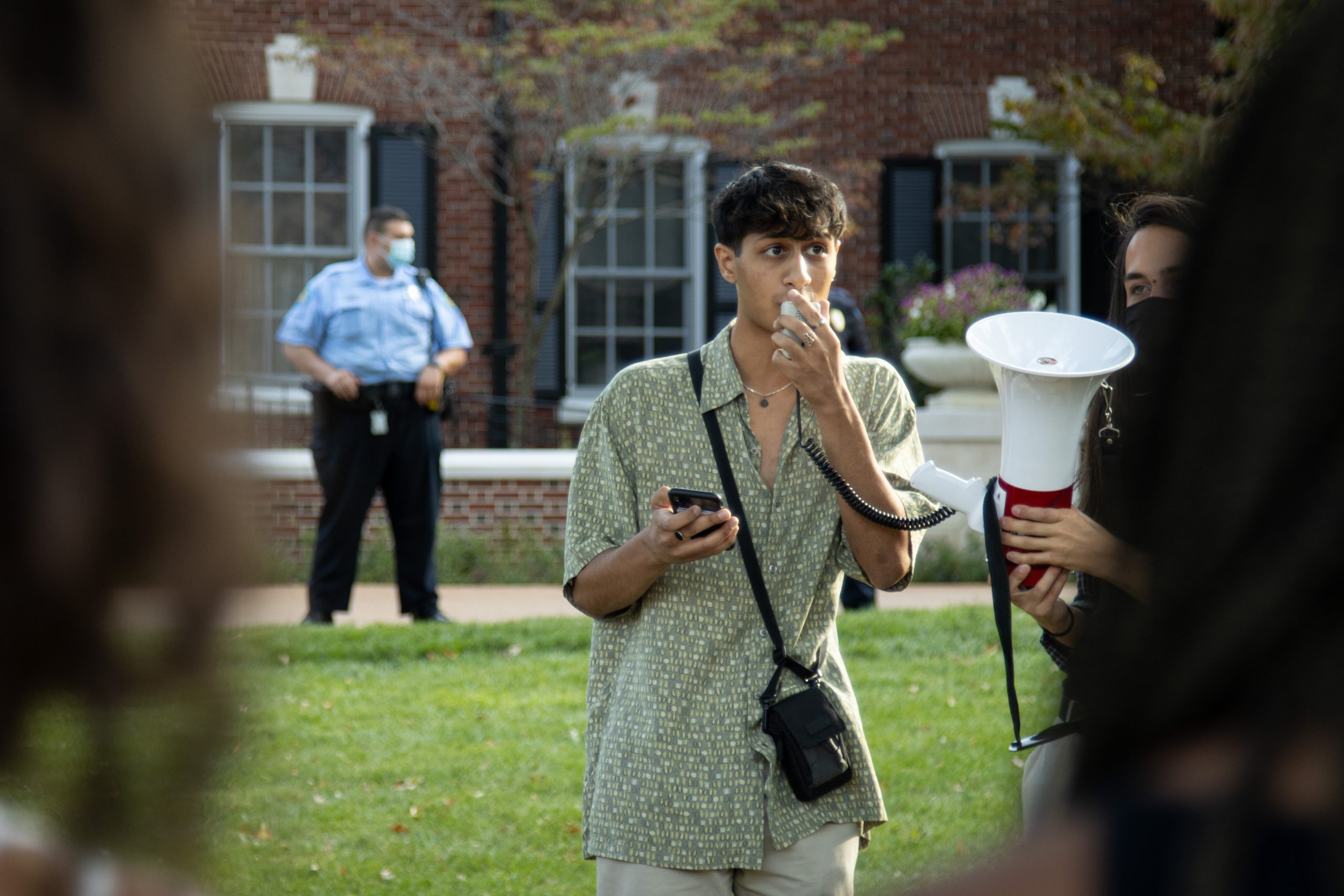 Roughly 60 students decried Chancellor Andrew Martin’s silence on recent Islamophobia at a protest outside his house Friday afternoon, leaving signs in his lawn and chalking his driveway with slogans such as “Silence is Violence,” “Protect Muslim community members” and “WashU is racist.”

Nearly a dozen Washington University Police Department officers stood guard during the protest. While there were heated conversations between protestors and administrators, there were no physical altercations or arrests. The University is not referring any students to the Office of Student Conduct and Community Standards for disciplinary measures, Associate Vice Chancellor for Student Affairs Rob Wild wrote in an email to Student Life Sunday.

The protest came nine days after some students went on academic strike, skipping class or attending remotely out of fear for their safety or in solidarity with Muslim, Black and brown students. The strike was in response to Islamophobia that resulted after senior Fadel Alkilani’s removal of commemorative 9/11 flags from Mudd Field.

“I want Andrew Martin in there to know that his student body is not okay with him just abandoning them and leaving them to feel helpless and unheard,” junior Mahtab Chaudhry, who gave a speech at the protest, told Student Life afterward. “He needs to take accountability for how he’s making students feel and his failure to act as a chancellor should.”

Martin has come under fire for failing to acknowledge Islamophobia and other hate in his Sept. 12 message to the community, with Thomas and Karole Green Professor of Law Gregory Magarian writing last week that Martin’s message did “far greater harm” than the initial removal of the flags.

“I felt angry because it felt intentional, and the statement felt like a kind of privilege that he was un-privy to our pain,” junior Shafiq Allaham said after the protest. “The way he described the actions of Fadel, and the way that he talked about the incident itself, restricted freedom of speech and made us feel further marginalized.”

“I fully support the ability of our students to engage and speak out on issues they care about, and admire them for doing so,” Martin said in an emailed statement responding to Student Life’s request for comment. He added that the University’s values remained unchanged: “We stand against hate, bigotry and discrimination in any form. There is no place in our community for racism or xenophobia of any kind. We are committed to living our values through our actions and we will continue to provide support to our students through appropriate channels, on a direct and personal level.”

Friday’s protest, which the group Students for Black and Palestinian Liberation organized and advertised through Instagram starting Thursday, started small. Twenty students or so gathered at first, but the protest grew soon after as students joined the crowd on the sidewalk in front of Martin’s Forsyth Blvd. home. As protestors began the action, Associate Vice Chancellor for Student Affairs and Dean of the Center for Diversity and Inclusion Mark Kamimura-Jiménez warned students to stay off the grass and the driveway in front of Martin’s home, emphasizing the need to respect private property.

Students did not listen to Kamimura-Jiménez, moving onto the lawn as some began giving speeches and leading chants such as “Martin, Martin, shame on you, Muslim students have rights, too” and “We’re fired up, we won’t take it anymore, so we’re knocking at your door.”

After students concluded their initial speeches, the group moved farther up the lawn toward Martin’s front door. As they approached the middle of the home’s rounded driveway, WUPD officers who had been standing on the sides began to make their way towards the front steps to meet protestors who had gathered there. The protestors receded back to the sidewalk, but made their way back to Martin’s driveway shortly after, this time to write messages in chalk. They were once again greeted by the police, who by this time had grown considerably in number, from approximately four to 10. Police told students to stop chalking and began to move forward, with some carrying their bicycles in front of them. After about a minute, students stopped and returned to the grass at the edge of the driveway. 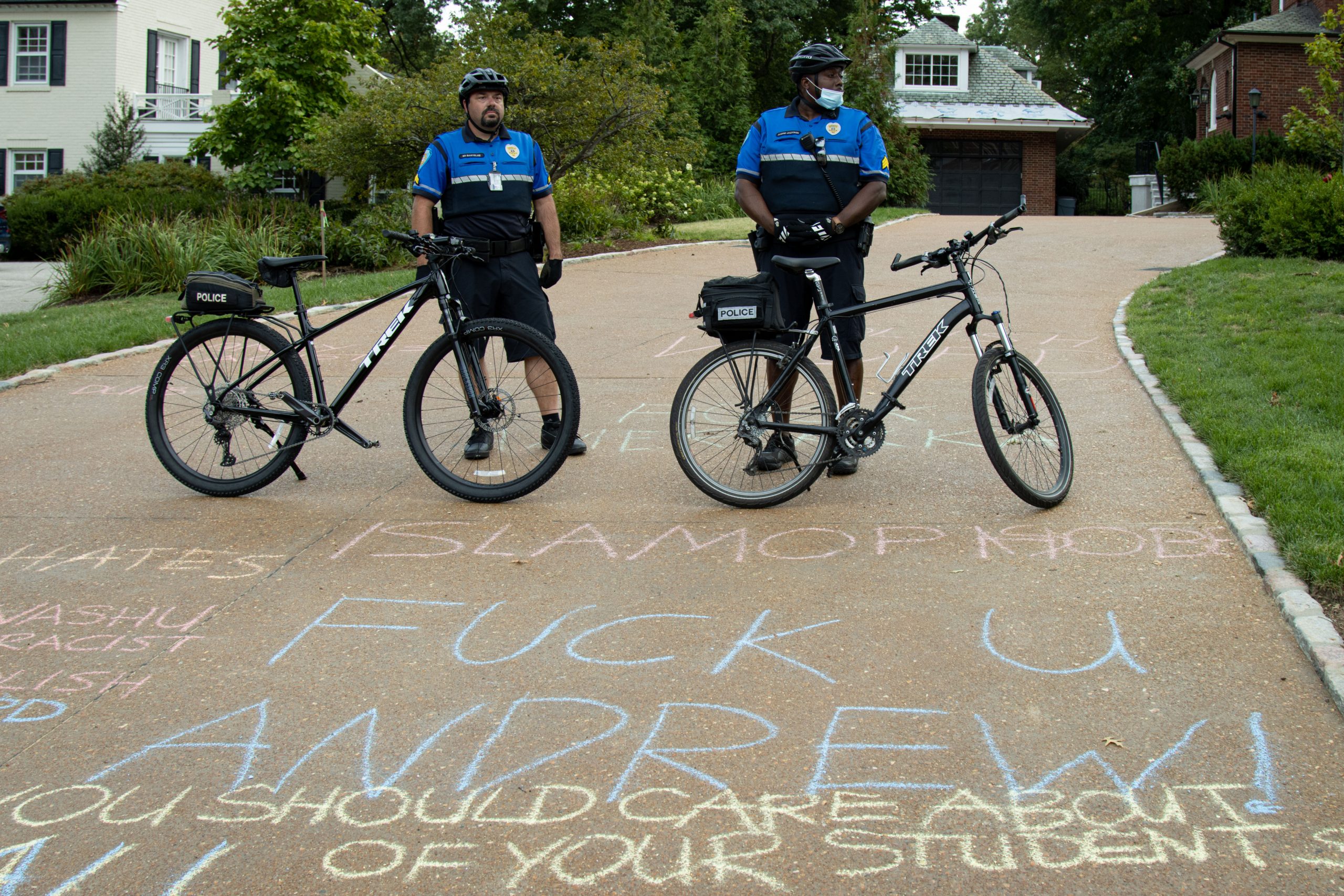 The protestors then criticized the police department and the University’s response to safety concerns among Muslim, Black and brown students last week. Some students conversed directly with WUPD Chief Mark Glenn and Kamimura-Jiménez, who both said they were open to meeting with students in the future for more substantive conversations. Associate Vice Chancellor for Student Support and Wellness Kirk Dougher also observed the protest from afar and talked to some students as the action wrapped up.

After 10 minutes at the edge of the driveway, students moved to the grass near the sidewalk and began placing signs in the lawn, with some using water bottles to hammer in the signs’ stakes. They then invited students to share thoughts and experiences before the protest dispersed.

In addition to their critique of Martin’s approach to Islamophobia and students’ safety, protestors included calls for Palestinian liberation throughout the protest and also advocated for the abolition of WUPD and changes to the Center for Diversity and Inclusion.

“These cops on campus don’t make Black and brown students feel safe, and as you can see by the way that they’re just protecting Chancellor Martin’s house, they’re not even meant to keep us safe in the first place,” junior Colleen Avila said in an interview. “They’re meant to protect WashU property and protect WashU capital and keep us from disrupting anything.”

Glenn said in an interview with Student Life after the protest that the police response was related to the students’ presence on private property. “We want to work with students so that they learn how to use their voice, because I think that’s the only way you get change in this country,” he said. “We’ll help everyone do that, but there are some limits to that. There are some things that are unacceptable, like going onto private residence. It’s just improper.”

Glenn said that the contingent of WUPD officers at the protest represented not all but “a good amount” of the department’s on-duty officers, adding that “we had a few extra on because we knew this was going to happen.”

For many students who attended the protest, the presence of WUPD represented what Avila described as the “performative” nature of any follow-up statement Martin could offer.

“It’s very hard to say what can be done to make [Black and brown] students feel safer, because I don’t think the administration is willing to take those steps,” said junior Ahmed Motiwala, who gave a speech sharing his experience with Islamophobia on campus. “They’re willing to say that they’re going to be inclusive and diverse, but it feels like a facade. They’re trying to be progressive in a way that clears their name but doesn’t actually create change.”