Questions of transparency continue to dog Student Union Executive Officers in the wake of the governing body’s decision to cancel next fall’s WILD, with critics suggesting that Exec might be setting a precedent for long-lasting changes to the semesterly concert without first seeking student input.

Social Programming Board, the group responsible for planning WILD, released a letter criticizing Exec on Friday after Student Life reported next semester’s concert might be canceled due to logistical conflicts with the presidential debate Washington University is hosting in October 2016. In SPB’s statement, the group attacked Exec for prioritizing its reputation over transparency and ignoring student approval when making important decisions. 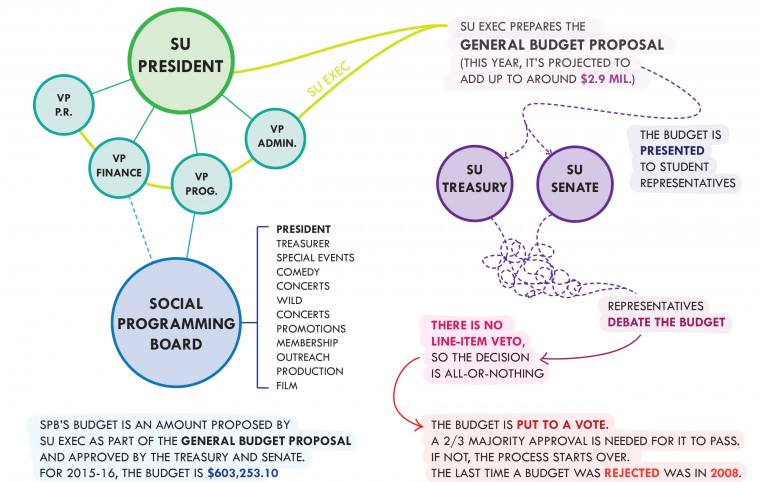 Conversations over the weekend with current and former members of SPB and the SU legislature reveal a similar sense of dissatisfaction with how Exec handled the decision to cancel the event, alongside worries that the student government’s leaders could be using the debate as an excuse to “pilot” having only one WILD in a given year—a change that many fear Exec is attempting to make permanent.

Next fall will mark the first semester in more than 30 years without WILD, normally the largest and best-attended event on campus each semester. Although many students said they understand the reasoning behind the decision, reaction to the optics surrounding it has been divisive.

Even SU Exec, which contains five members, was split on the decision. Multiple sources with direct knowledge of the process said that not all of Exec was unified in the cancellation decision and that some members of the executive committee have expressed reservations about how they have handled the situation, despite the group’s public-facing unity.

Speaking on behalf of Exec, senior Jordan Finkelstein, both SU’s current president and a former SPB president, declined multiple requests for comment on specific questions for this story, instead releasing a written statement that explained WILD’s scheduling complications and stated that SU will host “the most transparent budget process ever” this spring.

Despite this assurance from Finkelstein—who also ran for office last spring on a campaign promise of increased transparency—a number of representatives involved in the student government expressed concerns that Exec is neglecting this part of its responsibility to students.

The funds for WILD are one of the largest slices from SU’s general budget, approximately $100,000 (based on 2015’s fall WILD) out of a projected total budget of around $2.9 million for the 2016-17 school year. That $2.9 million comes from the student activities fee—an annual amount equal to 1 percent of tuition for each student—making WILD effectively a student-funded event.

“That’s our money; that’s my money; that’s your money. It’s the student activities fee we all pay, so just knowing that this is kind of shady in the way they’ve gone about it really bothers me,” sophomore Jonah Ragsdale, a Senator and chair of the Senate’s campus services committee, said.

Ragsdale’s reference to a “shady” process concerns Exec’s decision not to solicit wider student opinion about how to handle the fall scheduling and budgeting conflicts.

Junior Rahool Bhimani and sophomore Andres Avalle, SPB’s treasurer, said that as they realized the potential for fall WILD to be cancelled, they asked Exec multiple times to inform the general student body about it, but those requests were never realized.

Inside the student government, Finkelstein declined comment about when he had first consulted SU representatives outside Exec about the cancellation, but minutes from Treasury’s meetings in the fall show that the topic never arose in that semester. Moreover, several SU legislators from both the Treasury and Senate, who served in both the fall 2015 and spring 2016 semesters, said their first notice of the cancellation came this past week—after Exec had already made the decision.

Some representatives didn’t mind the late announcement, arguing that the decision was Exec’s to make, but others wished there had been more communication throughout the decision-making process.

“A lot of SU people think what happened was appropriate,” junior Alex Rothbard, a second-term Treasury representative, said, adding that he was satisfied by Finkelstein’s explanations about the debate conflict at the most recent Treasury meeting.

But Rothbard isn’t entirely content with Exec’s information thus far; he echoed the concerns of a number of Treasury and Senate representatives who contend that they haven’t yet received an indication of what debate-related programming might look like.

Senior Jessie Bluedorn, SPB’s president until Bhimani took the position in November, suggested that surveys and student outreach could help SU keep its constituents engaged in the decision-making process.

In an email sent to student group presidents and treasurers over the weekend, junior Kenneth Sng, SU’s vice president of finance, wrote that the first draft of next year’s general budget will be released this week in advance of the legislature’s approval meetings on Feb. 20 and 21. With that draft not yet finalized, it’s unclear exactly how the dollar amount usually allotted for fall WILD—around $100,000 in fall 2015—will be spread elsewhere in the budget, though indications are it will be largely split between additions to spring WILD’s budget and a special fund earmarked for debate- and election-related programming.

But questions persist both about the debate programming, which SU representatives say still hasn’t been defined, and about how much additional funding for the spring event can improve its quality, given that SPB’s budget to book an artist won’t be double the usual amount.

“How is the quality of spring WILD going to really increase?” Rothbard asked. “Because A-listers come at a certain price point that is not going to be helped by an extra $20,000.”

That individual change will likely prove the most contentious during the budget approval meetings, especially because the process does not include a provision for a line-item veto—meaning Treasury and Senate representatives either approve or reject the entire $2.9 million budget, without the ability to reject specific items.

That binary process can lead to a passive acceptance of Exec’s proposed budget allocation, legislature members said. Senate and Treasury—both of which need to vote to approve the budget by a two-thirds majority for it to pass—have accepted every proposed budget since 2008, by unanimous vote each of the last two years.

“When things are handed down to us, we accept it because we’re too afraid to disagree,” Ragsdale said of the approval process. “That’s what I fear is going to happen—just because Jordan [Finkelstein] and Kenneth [Sng] show up with a smile, say, ‘Hey, here’s the budget,’ we’re going to sit there and we’re going to pass it.”

According to Bhimani, Exec has suggested that an amount between $20,000 and $150,000 could be cut from SPB’s budget for the 2016-17 academic year, which is unlikely to return in future allocations as new leadership every year uses the previous year’s budget as a baseline.

“Who’s to say where that money is going to go? Whether it’s going to come back to fall WILD, whether there’s still going to be a fall WILD—that’s what our worry was,” Bhimani said.

“That budget will never go back up in the future,” Ragsdale predicted. “That’s how our budget process works, is that we go off last year’s budget, and we usually don’t give increases.”

Many students interviewed for this story discussed their belief that Exec intends the WILD cancellation to serve the added role of preparing students for the shift of WILD from a semesterly to an annual event.

But with SPB potentially losing a portion of its funds in the future, thanks to the precedent set by next year’s shrunken allocation, students are concerned that a single event might not be able to double the excitement of a standard WILD experience. Students are additionally worried that even if a larger, annual event proves more popular than the current structure, the steps Exec is taking to use next year as a “pilot” run are dishonest.

Senior Scott Jacobs is a former Treasury representative and SPB treasurer—he served in the latter role while Finkelstein was the group’s president. Jacobs said that he has heard unofficial discussions about transitioning WILD to a once-a-year event in the past, but not to the level of seriousness that he hears now.

While Jacobs isn’t opposed to going that route for a test one year, he said he disapproves of the way SU is handling that potential move.

“I don’t think it’s fair to use the debate as a way to basically force the school to a one-WILD model,” Jacobs said. “I think it would be a really valuable experiment, actually, but I think it’s really problematic that there hasn’t been any guarantee that the student voice is going to be taken into account after you do this test run.”

Especially ironic, Jacobs noted, was that SPB’s surveys began when Finkelstein was SPB president. That outreach is missing from the current process, he added.

“To completely disregard student voices by making these blanket decisions or seeking carte blanche to just do whatever one wants—I don’t think it’s a fair way to treat constituents,” Jacobs said.