In 1969, the Black Studies program was founded in response to protests by the Association of Black Students, who confronted administrators in Brookings Hall. Now, over 40 years later and under a different name, the African and African-American Studies Program has been upgraded to the status of a department.

Since the late 1970s, over 322 degrees have been conferred by the program, which currently employs 21 core and program faculty, 10 affiliated faculty and two postdoctoral fellows. A total of 11 majors and secondary majors along with 13 minors are currently enrolled. 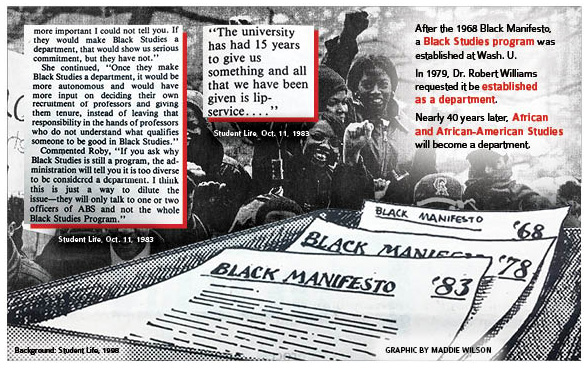 Gerald Early, the Merle Kling Professor of Modern Letters in the English department, will serve as the department’s inaugural chair. He feels that the status shift is reflective of societal changes, along with Washington University’s commitment to approaching African-American studies from a serious, interdisciplinary lens.

“That it was important, that it could determine its own destiny, that it could better plan its own curriculum, that it could hire its own people, things of this nature,” Early said. “So I think that, not only were those academic goals, they were political goals, wanting to show the autonomy of the department and its importance to the wider community.”

It’s also not the first time there’s been interest for a department. Following 1969, a constant demand came from faculty and students in the black manifesto papers in 1978, 1984 and 1998—each of which specifically called for a full department. The black manifestos were a series of protest documents written by the Association of Black Students in order to address problems within the black community on campus and ask for institutional action by the administration.

Early will serve as the department’s inaugural head, but the search is already on for his replacement. Though he is happy to have been instrumental in the process, Early believes a younger hire as department head will kickstart the department’s new vision and goals.

“You want a younger scholar, I think. Ideally a man or a woman in his or her 40s with a lot of energy and vision, who has a lot of ideas and really wants to build a program, go out and get grants and hire new faculty, get the program a lot of profile,” Early said.

The team is considering options both internally and externally, Early noted, but a decision has not been made.

What Early is most looking forward to are the expansions of existing modules within the department.

“To provide more study abroad opportunities for our students, being able to provide them with more connections that may help them get employment after they graduate from Washington University, that we can be able to develop a graduate program and maybe ultimately in the next five to ten years be able to offer advanced degrees,” he said.