Gregg Adams, a freshman and candidate for Student Union Senate, is facing criticism regarding his candidacy due to allegations of discriminatory and inappropriate conduct.

In a class of 2021 GroupMe called “WashU Guys 2021,” Adams asked, “which females would y’all smash,” encouraging other members of the chat to name women in the Washington University class of 2021.

Adams has since apologized for his comments in the group.

“That’s definitely something that was not OK to say,” Adams said. “I’ll admit that I said some bad things, but I think I’ve gotten to a point now where that’s not what represents me as a person.”

Another set of comments that has drawn students’ attention stems from a political discussion regarding LGBTQIA* rights. Students have labeled his comments in this discussion as homophobic and discriminatory.

“He promoted a lot of anti-gay discussions that I don’t think are representative of the Wash. U. community,” freshman Christopher St. Aubin said. 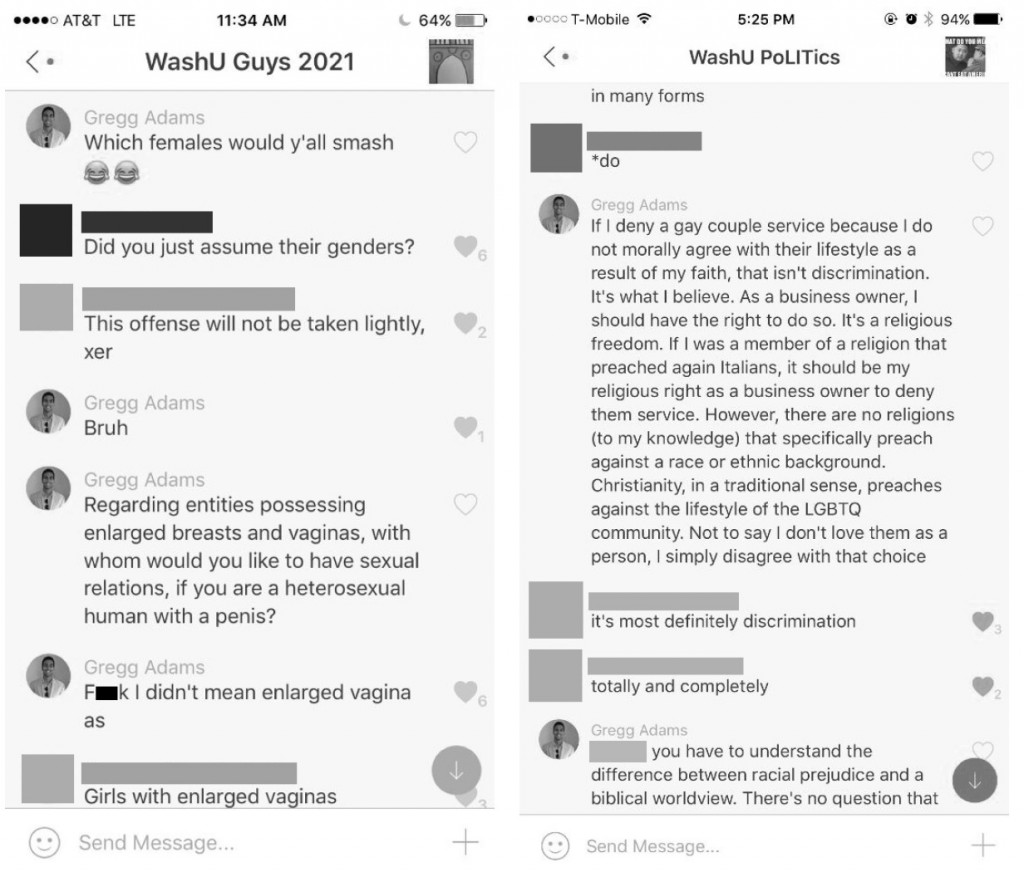 “During WUMUNS, I talked to some of the delegates in a way that was not appropriate, which was reiterated by the [WUMUNS executive council],” Adams said. “I did cross a boundary, and there were disciplinary actions for that, and I did accept that my actions were not in line with what I should have been doing.”

Some students do not think Adams’ name should appear on Tuesday’s election ballot.

“A person who acted the way he did should not be able to run for office,” St. Aubin said. “If I see his name on the ballot Tuesday, that really calls into question what type of an organization Student Union is. I really hope that all candidates and people in SU don’t agree with anything he said, and they should take action to remove him from the ballot.”

According to Student Union election rules, no disciplinary action may be taken by the election commissioner. The rule related to this situation states: “Candidates must respect the dignity of all individuals and parties while campaigning. This policy extends to all discriminatory remarks and actions on the basis of race, religion, gender identity, sexual orientation or other types of discrimination deemed inappropriate by the Election Commissioner.”

According to freshman and Election Commissioner Steven Kish, because no action violating election rules has been taken since the campaign period started, he has no grounds to disqualify Adams.

Although SU will not take disciplinary action, Kish emphasized that candidates’ behavior and statements will continue to be scrutinized.

“Student conduct is very important, and I know that’s a belief that a lot of my fellow SU officers share,” Kish said. “Between now and spring elections, we are working to expand the academic and conduct checks that have already been implemented for [Student Union executives].”