Students expressed anger at the Original Mothers bar and demanded that the establishment issue an apology and return students’ money at a town hall forum Monday night.

Some students called for another protest against the bar. Others demanded that the bar’s managers be given anti-discrimination training or be fired.

Almost 300 students showed up at the forum, which was arranged by the Association of Black Students, Connect 4 and Senior Class Council to foster discussion about an incident of alleged race discrimination by the bar against six black male students on Oct. 17.

All six students, who have said they were denied entry to the bar because of their race, were in attendance at the forum.

Senior Class President Fernando Cutz announced at the beginning of the event that the incident and subsequent response have generated both national and international media attention. CNN ran a TV spot on the story Sunday night, and The New Zealand Journal covered the story Monday.

Cutz also addressed questions about why students at the bar had not staged a walk-out from the bar on the night of the incident.

Cutz took full responsibility for the decision not to stage a walk-out, citing concerns he had that people “weren’t level-headed and that it could escalate the situation.” 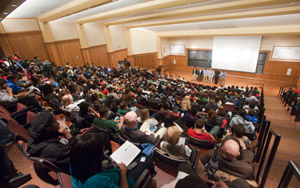 “The Senior Class Council and the six students who were involved were the only ones outside when it happened,” Cutz said in an interview. “The majority of students, I don’t believe they should be blamed for that decision [not to stage a walk-out]. It wasn’t their decision to make.”

Karen Aroeste, St. Louis regional director for the Anti-Defamation League, also spoke at the event. Aroeste made the suggestion that Mothers could fund a scholarship for a University student as a means of making amends for the incident.

The floor was then opened up to students to express their opinions and suggest future courses of action.

Alex Cooper said he was not surprised when he first heard about the incident at Mothers.

“I think the things that happened at Mothers bar were ridiculous but not too surprising just knowing how America is,” Cooper said.

Brandon Wilson, a sophomore and African and African-American studies major who is black, echoed Cooper’s sentiment that incidents of racism are common in America today.

Junior Wandalyn Savala, a member of Connect 4 who was involved in planning the event, said she felt students at the town hall were energized about the issue, but will likely not be for long.

“Everyone’s really fired up and I’m excited about that,” Savala said. “But I know in a few weeks people are going to be like, ‘Eh. Kinda don’t really have time. Kinda have a midterm.’”

Said junior Audrey Morrow, “I just really hope that when the spotlight goes away that people still remember that we still have these problems to fix.”