Grit and Grind rides again: How the Memphis Grizzlies provide hope for brighter days to come

In 2019, I took an important step in my journey to adulthood. After years of uncertainty, foot-dragging and apathy, I decided to commit to an NBA team. I grew up in Overland Park, Kansas—a suburb of Kansas City. My blood runs University of Kansas Jayhawk blue and red, but I’ve always been envious of people who grew up in places where fandom was instilled early. There’s something beautiful about devotion to a team—to celebrate triumphs and wallow in pitfalls of something over which you have no control.

I ultimately chose to root for the Memphis Grizzlies. I always loved watching the Grizzlies play as a kid. Football was my first love and they played basketball like linebackers. The Grit and Grind Grizzlies that battered the San Antonio Spurs were one of the first basketball teams I really cared about. As a little chubster, I saw myself in Zach Randolph. I envied Mike Conley’s effortless scoring prowess and Tony Allen’s tenacity. I loved the Grizzlies, but I was still a wild horse, unwilling to be saddled with the label of “fan.” Appreciator, sure. But “fan” carried an intimacy that I just wasn’t ready for at 13. I spent my late teens rooting for various teams. I enjoyed the Warriors when Andrew Bogut was their centerpiece. I was on the Thon Maker hype train in Milwaukee. I tried to find a squad that I could really throw my support behind, but I never felt the same fervor I did when I first saw those Grizzlies. When Grayson Allen joined the team in 2019, I decided it was time to make things official and join the Grizzlies fandom. It appeared that Grit and Grind was back! 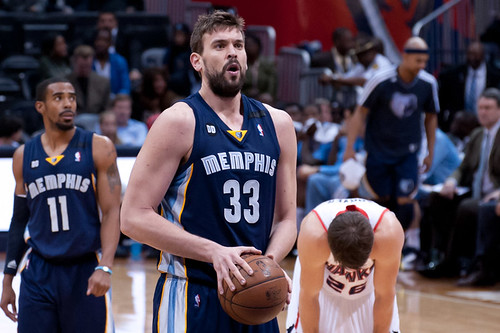 Marc Gasol, a key member of the Grit and Grind Grizzlies during the 2010s, prepares for a free throw against the Atlanta Hawks in 2013.

I was wrong. The Grizzlies had some talented pieces in 2019, but they were not a very good team. Stalwart defender Marc Gasol was gone. Mike Conley—the heart and soul of the team—was gone. Randolph and Allen had retired. In their place was the Bruno Caboclo of teams: a team two years away from being two years away. A team full of potential. But Kwame Brown had potential. There was a chance that I had hitched my wagon to a sinking ship and doomed myself to a decade of heartbreak and mediocrity.

In March of 2020, the Grizzlies looked like I thought they would: They were clearly very talented, but they weren’t a truly competitive team in the NBA yet. I was on top of my classes, I was doing well personally. My biggest worry was whether the Grizzlies were going to reach their potential. I miss that naivety; when a sports team I decided to cheer for a year prior could monopolize my mind for hours on end. I miss the days before my angst shifted from Ja’s ankles to my mother’s lungs.

During the pandemic, I’ve gone back and forth on how I should feel about watching sports. They’re a nice reprieve, but it often feels like I’m looking back at a past we can never regain. Staring at my TV screen reminds me of how many games I would have been at this year, how intimate it was to share stands with people who all cared about the same thing as me. The current season has lost its luster to me as a sports fan. It’s a nice gesture, but more than anything, I needed something to help me relish the passing of time again.

And funny enough, I’ve found that in the Grizzlies.

Whether they win or lose this season is of little consequence to me because the Grizzlies now have a spectacular young core of players. Second year future point god Ja Morant is a burgeoning superstar. Forward/center Jaren Jackson Jr. has all the tools to become an elite defender and an offensive threat. Rookies Desmond Bane and Xavier Tillman are already solid contributors. The sky is the limit on young, athletic forward Brandon Clarke. And that isn’t even mentioning Grayson Allen, Dillon Brooks and Jonas Valanciunas. The Grizzlies look like the team of the future.

The past nine months have felt like sputtering wheels, churning up more mud and hardly lunging forward. Survival is at a premium and the future is something we merely theorized about before the world ended. I hardly remember the sweetness of pandemic-free life. However, that the Grizzlies have a bright future is a reminder that our hellish present will eventually become the past. Grit and Grind will ride again.

READ MORE OF SENIOR SPORTS EDITOR DORIAN DEBOSE’S REFLECTIONS ON THE CONNECTIONS BETWEEN SPORTS AND LIFE: