LeBron James is the greatest basketball player of all time. This is beyond argument.

His resume on the court is matched only by others on the basketball Mount Rushmore. He’s been an elite performer in every facet of the game for a decade and a half. At 35, he looks like he could continue being a great player until he’s 40. He’s a better scorer than Magic Johnson, a better passer than Michael Jordan, more durable than Larry Bird and during his prime, he was more athletically gifted than any American athlete not named Bo Jackson. If LeBron was created in a basketball lab by scientists devoted to crafting the best player ever, nothing about his frame or skill set would change. 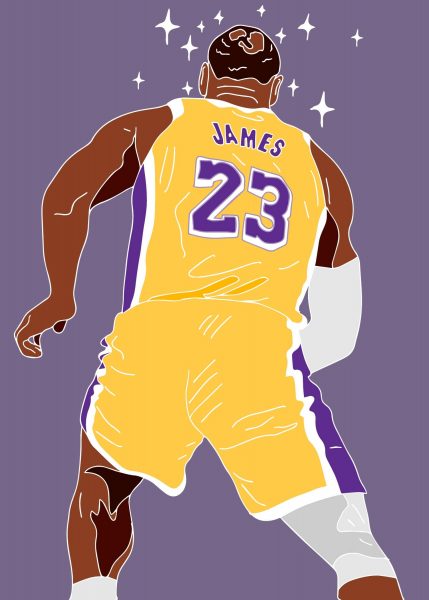 However, those on-the-court talents don’t necessarily make him the best basketball player ever. There’s an argument to be made that Jordan and Kareem Abdul-Jabbar were better players who were even more dominant in their peaks. What makes LeBron the greatest basketball player of all time is what he has done off the court and—to some extent—on the court: He’s going bald.

I remember when LeBron’s hairline first became a topic of national mockery. He was at his peak. Kobe was aging. Steph Curry was not reinventing the game yet. Kevin Durant was still developing into the unstoppable offensive force he was for most of the 2010s. At this time, LeBron was the best player in the NBA. And it wasn’t even close. Yet between his monster dunks, humiliating chase down blocks and flashy passes, pundits still found time to needle him about his receding hairline.

Other NBA players have gone bald. Hell, other greats have. Jordan became Air Jordan after his hair left. Lou Alcindor was a dominant Bucks great with a puffy afro. Kareem Abdul-Jabbar is the shiny dome at the top of the NBA all-time points leaderboard. But few other players have gone bald while fighting so publicly to avoid it.

There was headband Lebron, who tried to cover the fact that his waves had reached low-tide with headgear. Then there was “balding and proud Lebron” who was balding, but did nothing to hide it. This was a brave performance, but bravado can only last so long because eventually, we got “Rogaine LeBron” where LeBron’s hairline miraculously reappeared for a postseason. Maybe being a superhuman athletic specimen reverses your aging. Or maybe the strain of losing your hair while you still think you’re at your peak was too much for King James to handle.

This might seem like I’m mocking LeBron for being able to save every franchise he touches but not being able to save his own hairline. But I’m not. I used to mock LeBron for the measures he’d take to combat baldness. I was in the peanut gallery that roasted headband LeBron. I poked fun at my own bald father about trying those hair regrowth products that LeBron used. But then something terrible happened to me. Something worse than I could ever imagine; something I wouldn’t wish on my worst enemy (the IRS): I started going bald at the age of 20.

It started with a bald spot right in the back of my head. When my hair was lush and thick all over, I would feel that spot and I think I always knew it would betray me. When it finally did, I was still in denial. Maybe I was stressed. Maybe I got a bad haircut. Surely, I couldn’t be going bald before I had even consumed alcohol.

The death knell came at my hairline. It’s a slow killer. The edges of your formerly crisp waves slowly begin to creep back. And only you know it. And now you’re paranoid about when your plight will become apparent to all around you.

I tried to headgear it away. I never wore hats in high school or early college. But suddenly I found myself with a hefty collection. Then I tried to barber it away. I started going to the barber every two weeks, asking advice, trying to figure out how I could live in a post-hair world.

As I bartered with my barber to do whatever necessary to prevent me from going bald in my early 20s, I finally realized how LeBron must have felt. Here is one of the best basketball players of all time, feeling the same existential dread I was. But instead of being made fun of by just his family and the few “friends” he had confided in, perfect strangers were dunking on him online. Jordan punched Steve Kerr over a practice. He couldn’t have survived the media cauldron LeBron emerged from.

Going bald is a personal time for a man. LeBron didn’t accept his fate easily, but he has handled it gracefully. He has provided a blueprint for balding young men across the country who feel that their time with their hair is fast fading. Do what you can to save it. If that doesn’t work, grow a beard. And if that doesn’t work, buy a hat. LeBron has shown us that going bald is normal. Being insecure about it is normal. And you shouldn’t feel like less of a man because your hair didn’t make it to 30.