42.5% of undergraduate women will experience nonconsensual sexual contact by their fourth year at Washington University, according to findings released in the Association of American Universities (AAU) Campus Climate Survey on Sexual Assault and Sexual Misconduct, Oct. 15.

The figure rose from 33% in the 2015 survey, signaling an upward trend in the prevalence of sexual misconduct on campus. 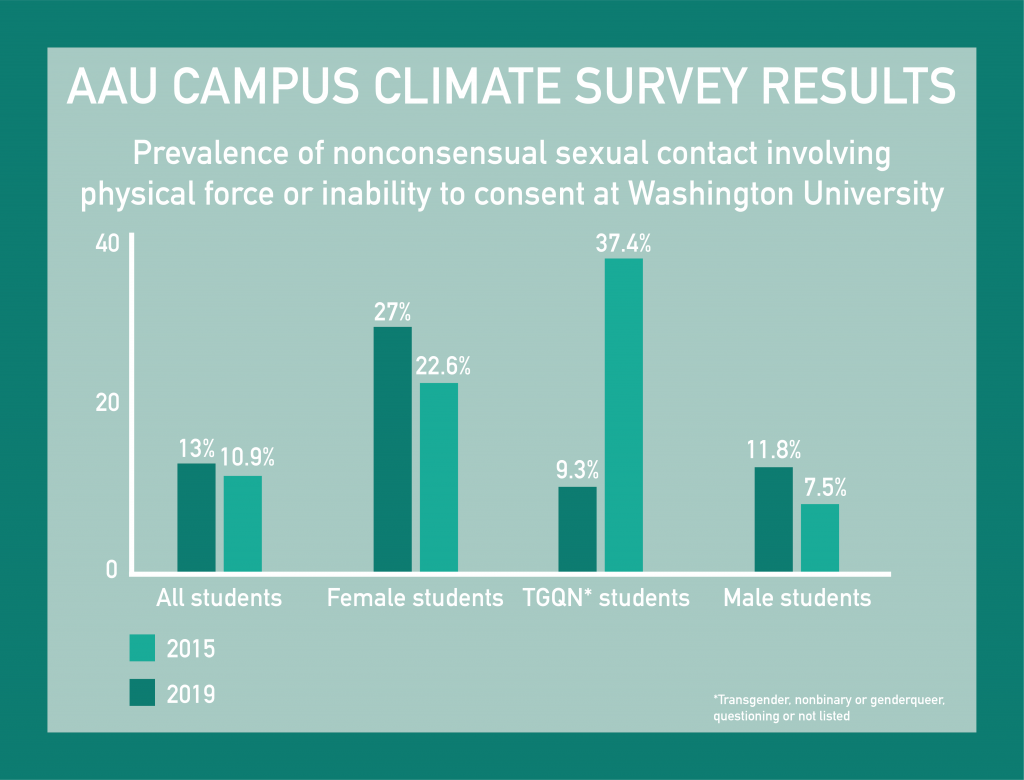 The prevalence of nonconsensual sexual contact by physical force experienced by all students also increased at the University from 10.9% to 13%, while the nationwide rate increased from 11.7% to 13% between 2015 and 2019.

The survey was administered at 33 universities nationwide. 16.9% of students responded to the survey, bringing the response rate down from 22.5% in 2015.

Vice Chancellor for Student Affairs Lori White acknowledged the 2018 Title Mine rally’s effect of bringing increased attention to these issues and suggested that Washington University and universities nationwide still have room for improvement.

“Nationally, we continue to have a challenge with respect to sexual assault, sexual misconduct, sexual harassment,” White said. “I think that, collectively, the national data show that all universities, including Washington University, need to continue to work on these issues.”

“Those of us who do this work every day don’t think we’re, unfortunately, terribly surprised to see that we’re seeing more reports of this behavior coming forward,” Title IX Director Jessica Kennedy said. “In some ways, that’s a very good thing because more people are feeling comfortable naming their experiences and we hope seeking help and those sorts of things, but we recognize… that there’s a lot of work to be done still, and these numbers just sort of confirm that for us.”

White cited the measures that the University has taken in the past year to improve the University’s handling of Title IX processes, including forming a Title IX advisory committee and hiring a full-time Title IX investigator.

“I joined LIVE and organizations like LIVE, like Title Mine, starting in 2016 to help alleviate this sort of problem, and not to see the fruits of my labor bearing at all, it bothers me,” senior Nick Kinberg said.

White, Kennedy and Relationship and Sexual Violence Prevention Center Director Kim Webb will moderate a listening session to discuss the report Oct. 17. Chancellor Martin and other University leaders will also be in attendance. Going forward, University leaders plan to take student feedback into account while determining what steps to take in the future.

While all three moderators agree that the uptick could potentially be attributed to increased openness about issues related to sexual misconduct on campus after becoming a more public issue since 2015, Webb maintained that the exact reasons remain unknown.

The University plans to hold multiple listening sessions in the future and will be making efforts to address the issues raised by the report based on student feedback and concerns.

Kinberg urges the University to continue working with Title Mine and students to remain engaged in issues related to sexual misconduct on campus.

“That’s another thing that the student body can do—get educated on rape culture, learn where it comes from, talk about it rather than shut people down, and systematically dismantle it,” Kinberg said. “And if you hear that one of your friends has done this awful, awful thing to someone else, hold them accountable. Easier said than done, but it needs to be done.”

Editor’s note: This article has been corrected since the time of publication to reflect that the statistic regarding women experiencing nonconsensual sexual contact by their fourth year at Washington University is not exclusively in cases of physical force.