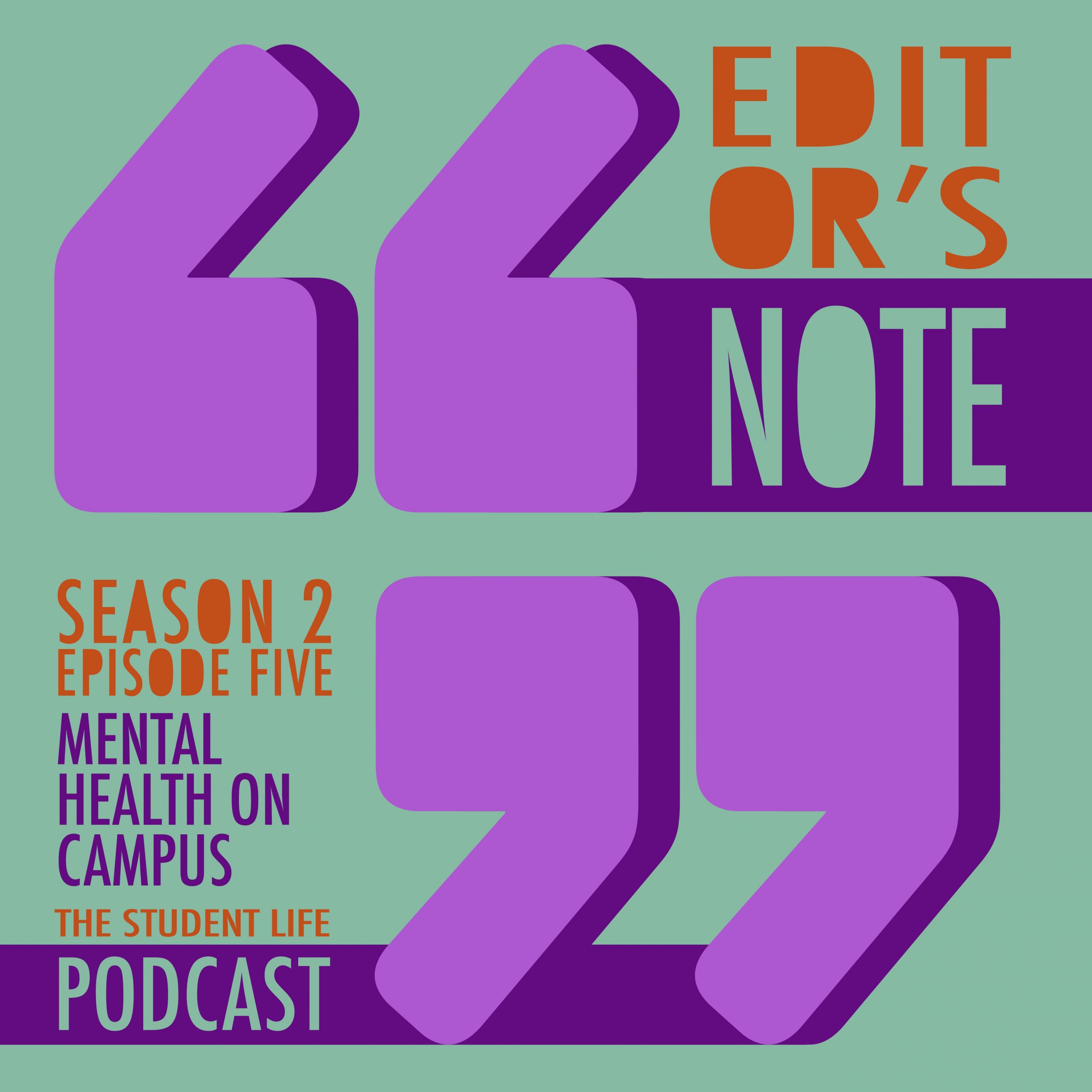 Washington University announced this month that starting in November, students will have access to TimelyCare, a telehealth service for both medical and mental health care. This service will be free to students and follows students’ frustrations of low staffing issues at Habif. In other news of mental health on campus, Uncle Joe’s has started a workshop to educate students about their role in suicide prevention. Senior Scene Editor sophomore Olivia Poolos spoke with Managing Editor senior Ted Moskal and Senior News Editor senior Grace Kennard about these new resources. Theme music by Copy Chief JJ Coley.

This episode contains discussion of suicide and suicidal ideation. Resources for anyone affected by these topics are listed in the episode description.

OLIVIA POOLOS (0:20-1:44): Student Life newspaper has talked a LOT about mental health care in the past year and a half. Just in the two months since the start of the school year, six pieces that focused specifically on mental health on Washington University’s campus have been published.

All of this has led up to the past couple of weeks, when the University and one of the main mental health services on campus have implemented new resources and programs to better support students.

I’m Senior Scene Editor Olivia Poolos, and you’re listening to Editor’s Note: Student Life’s weekly podcast breaking down our biggest stories with the reporters and editors that covered them.

And Uncle Joe’s has refocused their efforts on suicide prevention, starting with a workshop to educate students about how to support their peers.

I sat down with Senior News Editor senior Grace Kennard, who attended and wrote about the Uncle Joe’s workshop, and Managing Editor senior Ted Moskal, who reported on TimelyCare. Moskal said campus trends have reflected national spikes in demand for mental health care on college campuses.

TED MOSKAL (1:45-1:52): Wait times at Habif have been pretty significant this year, and a lot of students have been kind of fed up with just how difficult it’s been to get an appointment.

GRACE KENNARD: (2:01-2:17) I know from the story that I wrote, Uncle Joe’s, the leaders, Lily and Emily, they said that looking at their data, numbers have increased in the past three to four years. So I just think like Habif, Uncle Joe’s, the resources on campus are really overwhelmed.

OP (2:18-2:27): In order to outsource some of this demand, the University turned to TimelyCare. This comes after calls from students to hire more counselors, as Moskal reported last January.

TM (2:28-2:52): There have been efforts made. There have been new staff hired at Habif, changed the triage system to make it easier to offer students access, among other things. But it’s just really difficult to hire new people or new mental health professionals. So that’s really been an ongoing difficulty for WashU and just a lot of outlets in general. So TimelyCare kind of bisects that solution by outsourcing a lot of this work to a third party.

OP (2:53-3:00): Moskal also pointed out that TimelyCare offers solutions to many of the concerns students have about mental health services on campus.

TM (3:01-3:42): One of the demands that students have brought up last year or last January, was the issue that a lot of students are having this difficulty finding counselors at Habif who have, who have shared identities and who can relate to the struggles that they are going through. And even if Habif hires one or two more counselors, that issue is not necessarily going to get resolved. And another issue that wouldn’t necessarily get addressed by hiring new counselors is the fact that Habif is not 24/7, right? Like that’s just not in the scope of what they do. So going with TimelyCare kind of side steps both those problems by providing a 24/7 service and also having a much wider range of counselors with different identities for people to choose from.

TM: (3:49-4:15): When COVID March of 2020, the University was really considering a bunch of different telehealth options because so many students were going away, and they needed to still be connected to resources. And Student Union really took the initiative to consider a bunch of different options from telehealth services, do the research and just kind of do their homework on what good options might be. And then all that work kind of resulted in this eventual adoption of TimelyCare this fall, but it just takes a while.

OP (4:16-4:34)Aside from Student Union, Uncle Joe’s, a student-run and led group, has been working to increase focus on suicide preventation. Kennard attended their suicide prevention workshop on October 16th. Even though she was there as a reporter, not a participant, Kennard found the workshop personally impactful.

GK (4:35-5:09): It was definitely difficult because I’ve had some really close loved ones deal with suicidal ideation. And so that was definitely difficult, but I also feel like it was really informative and it was helpful to be able to think about, like my past experiences with loved ones and learn knowledge of how I can address that and be a better friend and better ally in those situations in the future.

GK (5:15-5:39): So one thing that they really emphasized was that asking someone if they’ve thought about suicide does not increase their risk of doing it. And so that was a really big thing. And I didn’t realize that. And like I said, in past experiences with friends, I’ve always sort of worried about that. So it was really good for me to hear that and understand and have them emphasize it.

OP (5:40-6:00): In Kennard’s article, she mentioned that Uncle Joe’s as an organization exercises caution when considering whether or not to call the Washington University Police Department (WUPD) during a crisis.

Kennard noted that the trend of steering away from police interactions is present both on-campus and community-wide.

GK (6:01-6:31): Some people would prefer that police are not involved in those situations. And that was actually a recommendation in the public safety committee was to reimagine the way that WUPD was involved in responding to mental health crises. And this is something that’s going on nationally. Locally, like the St. Louis city police, they actually partnered with the Brown school at WashU to sort of rethink this, the police response to mental health crises.

OP (6:32-6:): 45The need for mental health services and the lack of adequate help is not an easy problem to solve. Uncle Joe’s and Habif are making strides in positive directions, but there is still, as always, a lot of work to be done.

TM (6:46-7:17): I would say this is one small step in the right direction. I think outsourcing a lot of Habif’s problems to a third party isn’t necessarily going to address some of the systemic issues they’ve had in the past. They can help and it can definitely make a tangible difference on the lives of a lot of students, which is why I think this is a good thing. But on the other hand, you know a lot of the problems, a lot of the gripes that students had with Habif, like the long wait times, stuff like that aren’t necessarily going to be instantly solved by throwing money at a problem, although it does help.

OP (7:18-7:28): Kennard, in speaking with the two directors of Uncle Joe’s, learned that their organization was prepared to continue to support students, specifically those who had concerns regarding suicidal ideation.

GK (7:29-8:06): Emily and Lily, they said that suicide prevention is really their top priority for the rest of the year. And that they at Uncle Joe’s, they want students to know that if you don’t know how to handle a situation, you think a friend might be suicidal, you are worried about someone but don’t know what to do. They really encourage people to call. They obviously can’t tell people what to do, but they can help you with a safety plan, they can help you assess risk. So they’re just a really great resource on campus for students to know about and use if they’re not sure how to handle a potentially dangerous situation.

OP (8:07-8:33): Senior Emily Angstreich, a director of Uncle Joe’s, said Uncle Joe’s will continue to have workshops with individual groups that reach out to them, as well as mandatory trainings for WUSAs and RAs.

Editor’s Note will be back next week to break down another developing story. For Student Life Media, I’m Olivia Poolos.

Behavioral Health Response (BHR) is a Missouri organization that provides crisis support, telephone counseling and mental health resources. They can be reached 24/7 at 1-800-811-4760.

The National Suicide Prevention Lifeline provides free and confidential support 24/7. They can be reached at 1-800-273-8255 or online at suicidepreventionlifeline.org/chat/.

The Steve Fund, an organization dedicated to the mental health and emotional well-being of students of color, has a 24/7 crisis text line that can be reached by texting STEVE to 741741.

The Trevor Project, a suicide preventation organization for LGBTQIA+ individuals, can be reached by calling 1-866-488-7386, texting START to 678-678 or online at thetrevorproject.org/get-help-now/.

Uncle Joe’s is a confidential resource with student counselors trained to provide support for a variety of issues. Counselors are available by phone 24/7 at 314-935-5099 and in person during walk-in hours from 10:00 p.m. to 1:00 a.m.

Listen to previous episodes from the second season of Editor’s Note, the Student Life podcast: