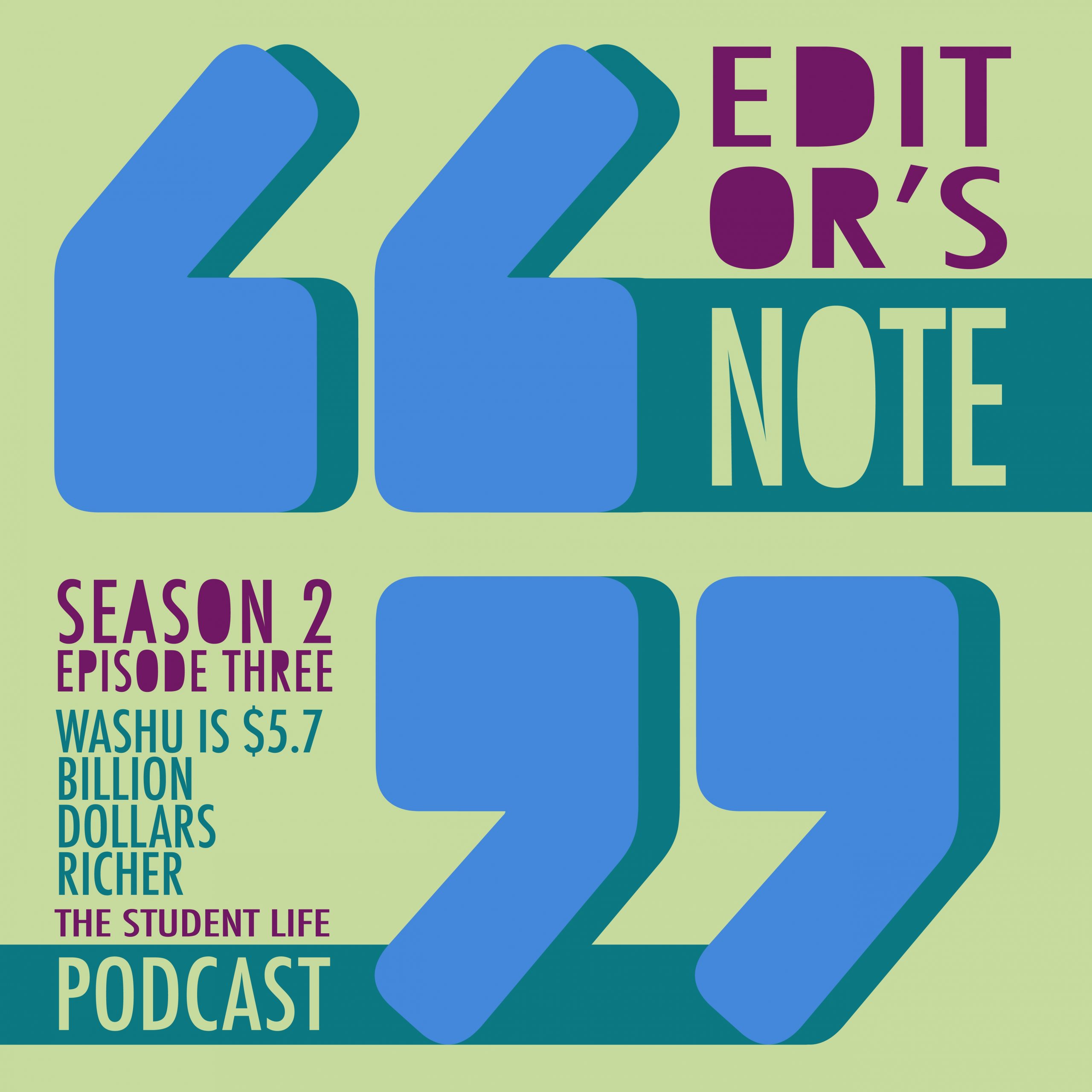 In a statement last week, Chancellor Andrew Martin announced a 65% return in the Washington University managed endowment pool. This unprecedented increase in funds has led to questions about where the money should be spent. These questions follow the lack of specific information about how the decision-making process or the decision itself will work. In this week’s episode Senior Multimedia Editor sophomore Kamala Madireddi talks with Staff Reporter freshman Meheer Commuri about what the increase of endowment funds means to the University and its students. Theme music by Copy Chief JJ Coley.

Kamala Madireddi (0:10-1:37): Last week, Chancellor Andrew Martin announced that the Washington University managed endowment pool had a return of 65% during the 2020-2021 fiscal year. That’s an increase of $5.7 billion, making the endowment pool worth $15.3 billion. The increase alone is approximately 100,000 times more than the annual tuition at WashU. This unprecedented increase in funds has led to questions about where the money should be spent, and the questions are becoming increasingly more pertinent as the administration has not released specific information regarding the use of the expanded endowment funds.

The increase in the endowment pool is unprecedented, especially after the decreased growth of the funds during the pandemic. Now, with this increase, WashU is ahead of many peer institutions and now has the task of efficiently using the additional funds towards the most important causes.

I spoke with staff reporter freshman Meheer Commuri, who reported on the endowment pool increase.

MEHEER COMMURI (1:38-2:33): This increase is very significant for two reasons. Firstly, a 65% jump in returns is extraordinarily unprecedented. It hasn’t happened ever with the University, and I don’t think these types of numbers or these types of increases happen with large endowments of peer institutions of WashU, so this is really quite a rare event that has never happened and definitely generated a lot of eyes when it did. And the second reason as to why it’s important is we just came off the pandemic, which did heavy damages for the finances of major institutions across America, because during the pandemic, not only were returns lower, but also universities had to increase their spending their endowment spending so it compounded the losses. So generating this heavy returns, right after the pandemic puts the University in a really good situation.

KM (2:34-3:01): The actual increase of the funds comes from strategic placement of the University’s assets. Commuri spoke with Scott Wilson, the Chief Investment Officer of the Washington University Investment Management Company (WUIMC). While Commuri explained how his conversation with Wilson shed light on the historic gain of the endowment pool, he emphasized that there was a level of vagueness surrounding the financial nature of the topic.

MC (3:02-4:14): The thing about, of course, anytime we’re talking about finance to some degree, it is going to be vague because really the only people who know like truly what went on is the people working at the investment fund, and they, of course, don’t want to reveal, rightfully, exactly what moves they made to generate these returns. So there is, again, to some degree, it’s vague, but from talking to people like Mr. Wilson, and researching this matter, I think that there’s two main things that the University’s investment fund did to generate this return. And both of them sort of come down to playing our cards right, and some degree, to sort of the luck of the draw. So the first thing is that the University has a really well diversified portfolio. So they can see good returns, no matter what the scenario is. In a time like last year, the University would have one subset of their portfolio do really well just because they’re investing in the sort of companies that profit or do well in a type of setting like the pandemic. And then in a year like this there’s probably another subset of their portfolio that’s driving their gains just because they have stocks in companies that do well in a return to normalcy.

MC (4:21-4:50): So they told me that they don’t have a one year strategy.  Of course they look at one year returns, but they don’t have something like a one year strategy. They have five years, 10 years, 20 years, 30 years strategies, and so the idea of looking at things in the long term and sort of valuing things within an extended time frame, I think that’s doing wonders for them. Again those changes that they implemented in 2017, they didn’t happen in 2018 they’re happening now in 2021.

KM (4:51-5:14): While the University is now reaping the benefits of these investments, the administration is isolated in the decision making process. The University has not yet released clear information on how they are planning on using the money or how they plan on deciding. Looking back to previous years, Commuri spoke about how the University typically uses endowment funds.

MC (5:15-5:48): No one has actually ever paid attention to the endowment aside from you know years like these. So on a normal year, people don’t really bat an eye. But typically the endowment goes to sort of two main causes. So the first cause is that the money will go to donor interests. And then the other side of it is where the board of trustees and the administration want the money to go to. That latter directive changes from year to year. So sometimes they might think that it’s more sort of campus life initiatives they want to see the money go to. Sometimes they think it’s academic life, sometimes they want it admissions related.

KM (5:49-5:57): Commuri also mentioned that Student Union (SU) has causes they’d like to see the endowment funds used towards.

MC (5:58-6:42): Both the University and SU want to see need-blind admissions, but I think that SU has certainly taken a more activist stance. They’ve certainly been more vocal and they’ve pushed harder on this issue. So, SU is saying that that’s a top priority of theirs, and they have said in their own words, they believe that it is embarrassing that WashU is the only top-20 school in the United States, that does not practice need-blind admissions, and they would like to see this changed as soon as possible. The second thing they talked about was mental health. SU hopes to bring in more resources to help students. And they had brought up that at Yale recently there was a cluster hire of I think around nine counselors. So, SU would like the University to do something similar.

KM (6:43-6:55): While SU and many other student groups, such as Fossil Free WashU, have many different ideas as to where the additional money could be used, the decision ultimately lands in the hands of the administration.

MC (6:56-7:14): Different people have different ideas as to where the money wants to go. Chancellor Martin has said that in the coming weeks, he will make an announcement as to where he plans to see this money go. Most likely people are talking about the University going to need blind admissions, but we will see and it’s really up to the administration at this point.

KM (7:15-7:35): Student Life will publish further coverage of the use of the endowment pool, so make sure to stay updated as we continue reporting on this topic.

Editor’s Note will be back next week to break down another developing story. For Student Life Media, I’m Kamala Madireddi.

More coverage on the increase to the managed endowment pool:

Staff Editorial: WashU, keep your word and put the endowment to good use