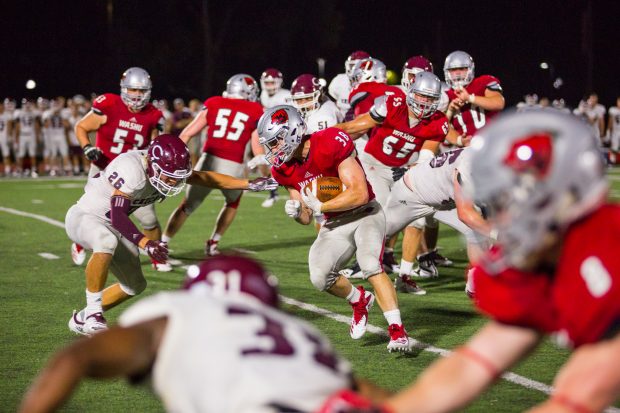 WashU running back John Fisher runs for short yardage in a 2018 game against the University of Chicago. The Bears fell to UChicago 31-21 in their season opener on Saturday. (Photo by Grace Bruton | Student Life)

On paper, there is little major riding on the results of the Founders Cup, an annual beginning-of-the-year football matchup between Washington University and the University of Chicago. The two teams do not play in the same conference, so when they meet, they are not battling for a seat in the playoffs or a conference championship. Yet on Saturday morning, as the two programs faced off in front of the Chicago skyline, the game felt anything but low-pressure in the 34th, but final, matchup between the traditional rivals.

For the Bears, the game represented head coach Aaron Keen’s first shot at defining a new era for a team in a transitional spot. UChicago, on the other hand, was aiming for permanent bragging rights, as they have dropped WashU as a future football opponent after five consecutive losses in the matchup. WashU’s 31-21 loss to its nemesis leaves the Founders Cup officially in Chicago, a disheartening conclusion to a decades-long rivalry.

Chicago surged ahead in the first minutes of the game, mounting a 14-point lead in just over seven minutes of possession. After winning the coin toss, the Maroons steadily gained ground, and the WashU defense was unable to respond, giving UChicago the chance to score their first touchdown. Less than two minutes after WashU gained possession, junior quarterback Matt Rush’s pass in Chicago territory was intercepted, allowing the Maroons to further jump ahead. From there, it was a battle back and forth; WashU responded with three touchdowns but was unable to match Chicago’s offensive strength.

While the Bears notched 328 net yards passing to the Maroon’s 219, WashU struggled in rushing, gaining only 1.9 yards per rush. While the total offensive yardage of both teams seems similar at first glance, a stymied run game left the Bears unable to gain the ground they needed. They had the chances — and the majority of the possession time of the game — yet they were unable to execute.

One highlight for the team was the plays made by special teams. The kickoff return unit gave the offense tremendous starting field position and varied Chicago’s offense with WashU’s placement of the ball.

It was a day of judgement for quarterback Matt Rush, who had not played a full game since 2018 and had big shoes to fill from former starting quarterback Johnny Davidson. It was a mixed day, as the junior threw for three touchdowns but also yielded two interceptions that gave vital points to the Maroons. Keen acknowledged that the Bears need to rely on Rush to make better decisions in some high-pressure plays. Still, Keen thinks that his quarterback is “a really intelligent, smart, ultra-competitive football player,” he said. “I have no doubt that he will work hard to improve where he made some mistakes. And that’s all you can ask for.”

To a certain extent, Keen is still taking stock of many of his players, with two classes who have never played football at WashU’s varsity level. Many of them rose to the occasion. Keen pointed to Collin Hoyhtya, a sophomore who led the receivers with 127 yards and two touchdowns, as a player who had not played a significant number of snaps yet had an impressive game. “We’ll be continuing to rely on some of that youth on our roster as the year goes on, and hopefully these guys continue to progress and get better and better,” he said. “We’ll certainly need to get better as we get going through our season.”

The Bears will play two junior varsity games before their next varsity contest, a home game against North Park on Saturday, Sept. 18. The bye week, Keen said, could not have come at a better time for them, since the Bears will rely on the JV games to test younger players on the roster while for the varsity players, the next two weeks will be devoted to improving schemes and becoming more cohesive offensively and defensively.

“I do believe that we just have not played enough football,” Keen said. “We get a chance to see maybe how far away we are, what adjustments we need to make and where we need to kick it up a notch in certain phases to be successful and to win football games.”

Ultimately, the loss stings, especially as the last matchup in a legendary rivalry. Still, for the freshmen and sophomores, this game will always hold a special place in their memories of their WashU careers. It was their first bus ride filled with nervous anticipation of the game ahead, the first time hearing the national anthem while in the white and red uniform. “It was just really special, and I was really thankful to be back out there,” Hoyhtya said. “We lost, but at the end of the day, I was out there playing football — best game in the world.”

‘Building from the ground up’: Football prepares to start the Keen era

Underclassmen football players and the leadership of upperclassmen