Kicking his way to the top: Johnny Davidson, from new punter to star quarterback

From the day he arrived on campus, senior Johnny Davidson was determined to play a significant role in helping his team.

Despite his desire to be the Bears’ starting quarterback, Davidson did whatever he could to contribute wherever he could, even if that meant becoming the team’s main punter. “When he came to campus, it was apparent that he was a competitor and we did not have a punter, so we basically had open tryouts for punting,” said head coach Larry Kindbom.

In his one-year stint as the fourth-string quarterback, he went on and “became one of the top punters in the country,” Kindbom recalled last week.

Davidson’s success boils down to “his competitiveness and how much he really does love football,” senior wide receiver Mitchel Groen said when asked about Davidson’s origin as the team’s punter. That first year, Davidson punted for nearly 2,000 yards, averaging 41.1 yards per punt and sinking 18 inside the 20-yard line.

Quarterback Johnny Davidson looks for an open receiver against Wheaton College last year. Davidson, who started his Wash. U. career as a punter his freshman year, has lead the Bears football team as the starting quarterback for the past two years.

The next year saw a “fairly open competition [for the starting quarterback position] with a couple of guys that were a year ahead of him,” commented offensive coordinator Scott Mueller. “Ultimately, he won the job…a few weeks into the season.”

Davidson’s first start against the University of Chicago, “was a little rocky,” senior running back John Fisher recalled. “You can’t just come in and control the offense like that. Sophomore year was a big growing year for not only him, but our offense and the team as a whole,”

“He came back his sophomore year, and he really didn’t have any game experience behind him, so it took him one or two games to really set the tone and share what he was capable of doing,” Kindbom said. “He took over, and I think the rest is pretty much known history.”

Despite his shifting positions, Davidson still felt a tug toward his middle school roots as a running back. “When I was younger, I was a running back prior to seventh grade. In seventh grade, it was the first time I started playing quarterback,” Davidson recounted. “I played [quarterback] all throughout high school, but that’s kind of where I get the running mentality.”

“It’s probably him trucking people,” responded senior wide receiver Tim Matthiessen when asked about his favorite memories with his longtime teammate and friend. “I think it’s funny to watch him take the ball and run over people.”

Senior Johnny Davidson punts the ball over a potential University of Chicago blocker last October. Davidson is credited with great work ethic, determinism and grit under pressure as both a leader and a friend on the Washington University football team.

Last fall, Davidson’s junior year, was the year that he really started getting a feel for his team. He led the Bears to an 8-2 record overall, just barely missing the playoffs. “Now he just has a really good understanding of the offense and kind of sees everything a lot differently,” Groen said. “He understands how things are going to go and he’s able to make a lot of good decisions out there.”

A lot can be said about his leadership ability, which has bloomed ever since he joined the team his freshman year. “You can see how he’s grown to find the right way to lead—not just the offense, but the rest of the guys on the team too,” Mueller said. “He tries to be the one that kind of sets the tone, not just the vocal leader, but the lead-by-example.”

After the Bears’ 43-7 win against Chicago on Sept. 7, Davidson is poised not only to build on a junior year in which he tallied 2,992 total net yards and 26 total touchdowns, but also to pass Wash. U. legend Thor Larsen for second all-time in school history for total yards and touchdowns.

Despite being close to the possible achievement, “[Davidson] has been able to keep that demeanor of being an assertive leader and being humble all the way through it,” Kindbom said.

“I mean, I think he’ll definitely do it, but he obviously knows that that’s not the most important thing. At the end of the day, it’s a team sport,” mused Fisher. “If he’s close to breaking the record, but we need to run the ball more that game for some reason, then he’ll have no problem handing it off and doing whatever it takes for us to win.”

Davidson’s style of play distinguishes him from other past great Wash. U. quarterbacks. Larsen, for example, “was a lot more play action, throw the ball down the field–incredible athlete,” Kindbom said. J.J. Tomlin, the Wash. U. starting quarterback from 2014-2016, was known for his confidence in making the hard and seemingly impossible throws. “J.J. had his quicker release—I’ve coached at Ohio State, and there were some pretty good players there. J.J. got rid of the ball faster than any kid I’ve ever seen,” Kindbom said.

Davidson, on the other hand, has a reputation for determinism and grit under pressure. “He can extend plays and make plays go better than probably any guy that we’ve had here,” Kindbom explained. “So a play is never dead until he’s on the ground or he got rid of the football.”

Despite the subtle differences in each of their play and leadership styles, Davidson credits Tomlin for a lot of the inspiration that made him the player he is today. “It’s more than just you being good yourself, it’s trying to make everybody around you better,” Davidson said. “That’s something J.J. showed me as a freshman… In terms of leadership and stuff like that, he’s helped me a lot along the way. I’m very thankful to have him.”

Davidson is also held in high regard when it comes to his work ethic. Despite knowing that he was going to be the starting quarterback this season, he simply “refuses to stop getting better and better,” Fisher said. 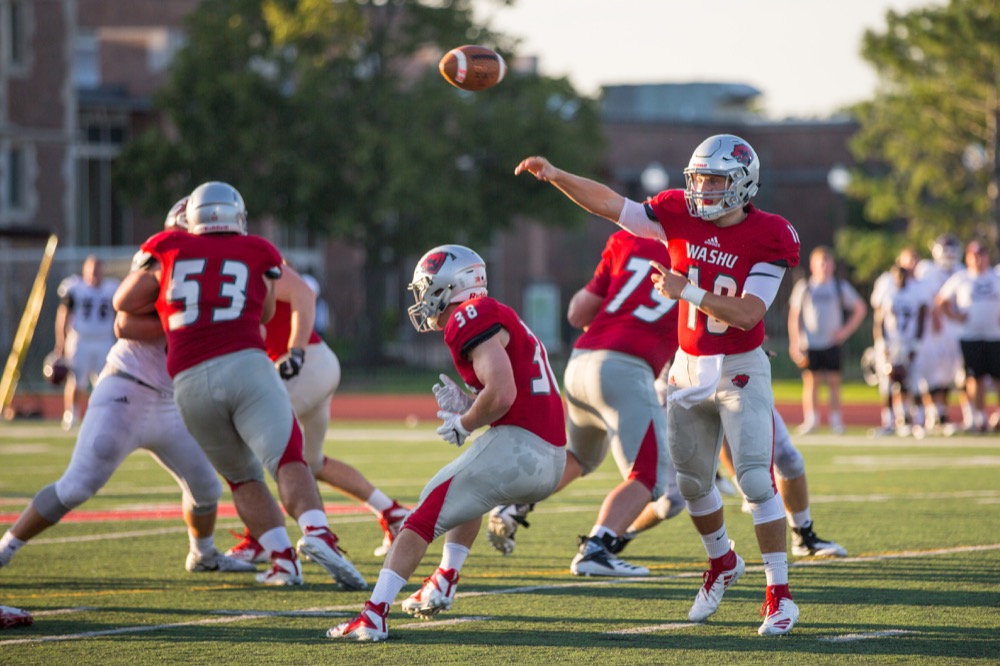 Johnny Davidson passes the ball to an open receiver, penetrating University of Chicago’s defense last year. This season, Davidson will add to an already impressive career where he has already tallied 2,992 total net yards and 26 total touchdowns.

“I don’t know the exact amount of hours [he works], but I’d say more than most. He’ll even stay after practice to help somebody else out,” Groen said. “He’s always trying to do whatever it takes to put the team in the best position.”

“His work ethic and contagious energy that he brings forward to everything, I think that will be something that lasts on,” Groen continued.

Davidson asserts that the focus on work ethic is something the senior class has emphasized. “Making sure guys are putting in as much effort as they can—that’s something as a senior class that we hope will keep going for the next few years,” he said. “Even if you’re a great player, the best players are the people who impact others, whether it’s on the field or off the field.”

Looking back on his years with the team, Davidson recalled great memories. “One of the things I’ve seen that’s grown over the past few years is school spirit towards games,” he said. “I think one of the cooler things was when we played Chicago last year at home. The stands were completely filled and it was really cool to see everyone rally around.”

A pre-game gesture sums up Davidson’s role off the field. “Before every football game, Johnny picks out all the coaches and administrators, and makes sure that we’re going to have a good game too,” Kindbom said. “He’ll come over and he’ll shake your hand. It impacts you, it makes you feel good, it makes you feel like ‘Wow, I’m a part of this.’ I don’t care how many times he has done it. I can tell you that every time he does it, it sends chills up my spine. I’ve seen him throw game-winning touchdown passes, but nothing beats the fact that the kid comes up and shakes my hand before a ball game and wishes me luck. It just blows me away.”

All in all, the impact that Davidson has had over the past three years and bleeding into this last year cannot be put simply into words. His legacy as a friend, a leader and a captain will live on long past his graduation date.

“There’s a slight difference between just setting a good example and actually helping other people become good examples. I was talking about that team player. I can’t get over that and in my mind, how much he impacts the people around him and turns them into role models,” Kindbom said. “Because of the way he goes about his business everyday, I don’t know how you articulate that or pen that into a story. But to me, that’s really where the story is.”