Underclassmen football players and the leadership of upperclassmen

The “stars” of the Washington University football team—the impact players who routinely make game-changing, exciting plays—tend to be upperclassmen. This is not surprising. The juniors and seniors who play the most minutes have earned their roles on the team through years of hard work and experience. Those upperclassmen are the leaders of the team, and they set the example for those who will soon follow in their footsteps: the freshman and sophomores who play limited minutes, but can be found studiously observing the game and excitedly tracking their team’s progress up and down the field on Saturday afternoons. Still in the early stages of their football careers, these underclassmen are influenced and supported by the upperclassmen on the team and the coaching staff. While the life of a football player can be busy, hectic and stressful, the support system the team provides is central to ensuring that younger players can thrive at Wash. U. 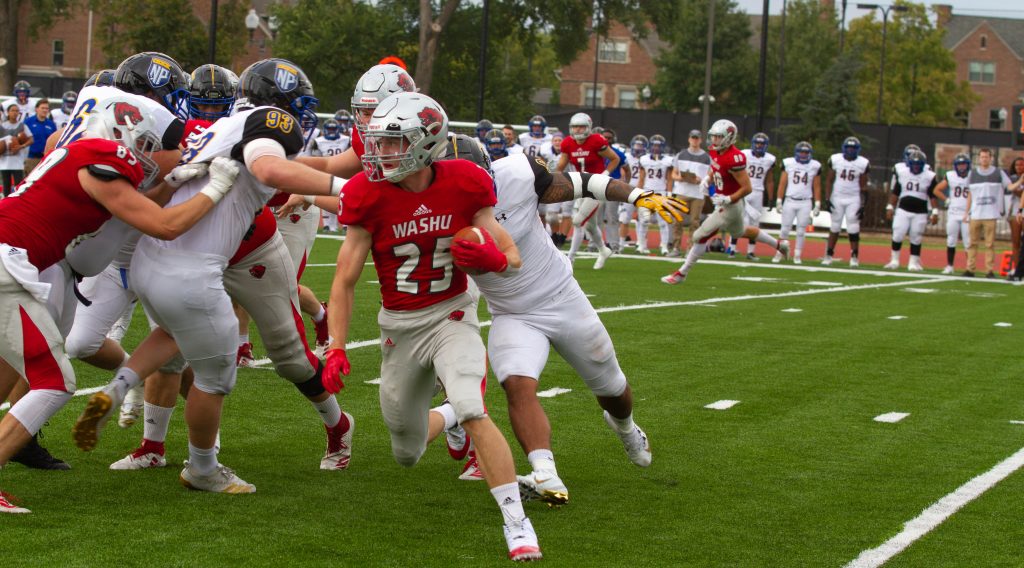 Sophomore running back Matt Moore makes a cut to escape pursuing North Park University defenders. Moore rushed for 74 yards over the course of the game against North Park on Oct. 5.

The upperclassmen play a substantial part in shepherding the younger players through their first years in the program. The upperclassmen are viewed as role models and have the huge responsibility of instilling the “play hard” mentality that is expected to be displayed during every game.

“Our catchphrase this year is ‘Leave No Doubt’—a lot of times the seniors will come up with a new statement that will repeat throughout the year, that’s kind of their job to instill that culture of working hard all the time,” sophomore running back Matt Moore said.

The older players make sure that the work ethic that is to be expected on a daily basis is upheld on and off the field.

“When practice is lacking a little bit, [the upperclassmen] will be like, ‘We have to step it up’ and it’s one thing to say it, but then you look out and you notice now some pads are popping and now everyone’s really getting better,” sophomore linebacker Anthony Brown said. “So it’s not as much about what they say, it’s more about what they do, they live it.”

There is plenty to be said about the younger players and who they look up to the most due to the way they carry not only themselves, but the team as a whole.

“I’d say Johnny Davidson, the [senior] quarterback,” freshman wide receiver Cole Okmin said of the player he looks up to the most. “I got to meet him before I came to school—he’s the toughest dude on the team and his work ethic is unbelievable. He really sets the example, how to be a part of the team and how to lead the team.”

Another senior who the younger players see as a leader is cornerback Justin DiCarlo.

“He balances a heavy load because he does ROTC, football, and obviously school here and I just kind of admire how he gets everything done, how he goes about it with class—he was really helpful to me and to all the underclassmen showing us along the way and outside of being a great player, he’s a great person,” freshman defensive back Sam Mattecheck said.

The coaching staff aims to make sure that the younger players are absorbing the information they will need when the time comes for them to take up the mantle.

“They push you day in and day out, let you know this is going to be you in the future; our theme is ‘Next Man Up,’” Mattecheck said about the contributions of the coaching staff towards player development. “If someone goes down and gets hurt, something happens, someone’s got to be able to take their place and step in. So I think they’re really preparing us for that. They do a great job of showing us every rep, every drill, it matters.”

The coaches are aware of the rigor and workload that comes with being a student at Wash. U., and they make sure that freshmen get the chance to adapt to the college environment while not becoming overwhelmed with their responsibilities of being an athlete.

“The coaches have always been very supportive of us—they are very capable of working with us,” sophomore linebacker Alex Harvey said. “The travel schedule is always known ahead of time so that we can make adjustments when making our schedules. It’s always very clear so that we don’t miss class.”

The hard work that is expected from the underclassmen is balanced by the fun traditions that the team has kept up over the years. There are various traditions that take place annually to make sure that the new players become close friends with one another.

“Every Thursday, we’ll do a position group dinner, so I’ll go out with all the receivers and quarterbacks,” Okmin said, adding that “there’s a special date night one, where we have to bring a date, and it was fun.”

“Each position group does their own thing,” Brown said. “For the linebackers, we go to a restaurant over in Dogtown and the freshman have to read the history of the restaurant in front of the restaurant. So it’s kind of just fun stuff like that.”