Bones in our Basement: WU re-evaluates its acquisition of human remains 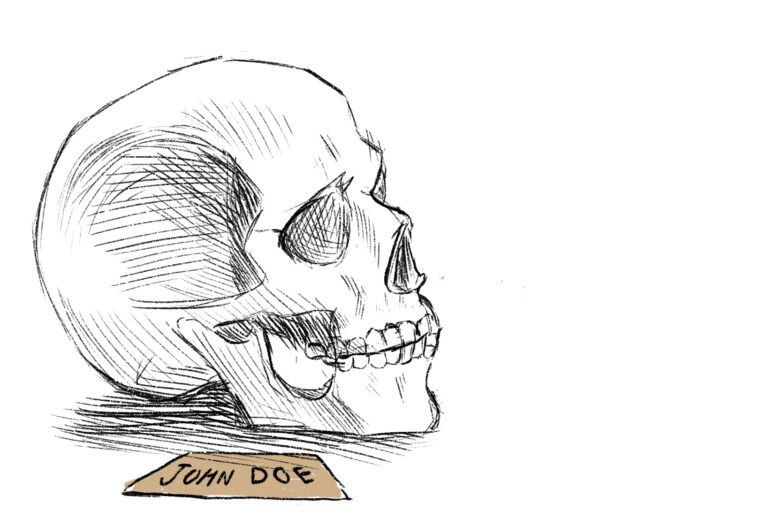 Junior Ben Norin was holding a fragment of a human skull in his anatomy lab on Nov 9 when Dr. David Strait, professor of biological anthropology, walked in and told the class that the lab was canceled. “I walked out with a friend, and we just looked at each other like ‘what just happened?’” Norin said. “Like okay, we’ll leave, but this is really strange.”

The following Monday, Strait told all 600 of his Anatomy and Human Evolution students that they would not be learning the prescribed material. Instead, he had something very serious to share with them. Norin said that during class, Strait was overcome by emotion and teared up while talking to them.

When he recounted the tale to me a few days later, he spoke softly, as if he was reading a bedtime story. But instead of sheep jumping over fences, the story was about the ethical quandary presented by human remains.

In the week prior, Strait had made two discoveries. First, was that WashU’s osteology collection, which the anthropology department used to teach with, contained specimens from the Terry collection, a group which consisted of nearly 1800 individuals from Missouri. Second, and much more dire, was that the Terry collection came from people who probably never consented to be collected.

Strait said that originally, he was under the impression that the bones the anthropology and anatomy departments used to teach classes with were from WashU Medical School donations, where a patient explicitly asks that their body be donated to research after death. Yet some skeletons — Strait says a maximum of 20 — were part of the Terry collection. “[Even] if I had known, actually I don’t know if it even would have registered as an issue of concern,” Strait said. The alarm bell began to ring when he read an article in Science published on November 2, titled “Medical, scientific racism revealed in century-old plaque in Black man’s teeth.”

The article reported that Robert J. Terry, former head of WashU’s anatomy department, amassed his collection by “taking advantage of the lack of legal protections for marginalized people in the 19th and early 20th century.” It went on to explain that in the early 20th century, people whose family members died in state institutions were allotted just 36 hours to claim the body before the deceased became “unclaimed,” and able to be donated to researchers.

This is the part of the story that Strait could not get over. “We live today in a world where we have these devices” — Strait shook his cell phone at me — “where we can communicate with everybody,” he said. “And even today, you know, you might not know someone is missing for more than 36 hours. Right? So you can imagine 100 years ago…” He gestured helplessly. “I had this visceral reaction.”

The WashU anthropology department is no stranger to murky questions regarding human remains. This, strangely, is a sign of progress. Decades ago, archeologists had few conversations about right and wrong when it came to digging up, and keeping, human remains. Today’s experts in the field have been left to deal with the consequences. Grant Stauffer, an archaeologist with the Choctaw Nation of Oklahoma and a former WashU archeology graduate student, is very familiar with archeological ethics. He said colonists and settlers, starting with Julius Caesar, were amateur archeologists. “Oftentimes when they [found] stuff, the resources that are that [were] unearthed end up becoming their possessions,” Stauffer said.

These days, many former colonial powers have begun the work of repatriating bones to their rightful homes. In 2020, France returned 24 skulls that purportedly belonged to Algerian resistance fighters back to Algeria. It was meant as a gesture of reconciliation to the formerly-colonized country, which only won its independence after a bloody war. However, the process isn’t always perfect.

Just this year, The New York Times discovered documents that revealed only six of the skulls were actually freedom fighters, with the rest made up of a few Algerian French army men, or imprisoned thieves. Some European countries, like Germany, Norway, and the UK (though not France) have rules enforcing repatriation of colonized bones to their home countries.

The United States also passed a law in 1990: the Native American Graves Protection and Repatriation Act. NAGPRA required federal agencies, museums, universities, state agencies, local governments, or any institution that receives federal funds to give human remains and funerary objects back to the appropriate tribes. Afterwards, NAGPRA institutions rushed to hire anthropologists to go through their collections and repatriate remains, Stauffer said. Many are still trying 32 years later.

“What NAGPRA represents is basically to take a step in the right direction ethically, but…many universities and museums are, for lack of a better term, doomed to determine where these human beings should go back to,” Stauffer said. Failure becomes a mark of shame. “It is basically evidence of misconduct in the past,” he said.

A week before the discovery of the The Science article, Strait told me that while WashU complied with NAGPRA to the best of its ability over three decades ago, well before most of the current anthropology faculty came to WashU, the process wasn’t perfect. “There are,” he said, “a small number of human skeletal remains that for various reasons — a lack of revenue or lack of context — could not be returned in that sense.”

Stauffer, during his time as a graduate student, was aware of the remains’ existence. He explained that modern archeologists are taught to be respectful of the dead, referring to human bones as “individuals” and “people.” To allow students to handle people who did not explicitly donate their bodies to research would be incredibly disrespectful, he said. “Those tribal groups, like their ancestors in the past, have very specific beliefs about how human beings who have passed away should be treated,” Stauffer said.

Under NAGPRA, the bones — if Native American — would be legally barred from use. But oddly enough, if the bones were from anyone else, the federal rules don’t apply. Still, given the apparent lack of knowledge about the individuals’ history, Strait said that no one touches them. They’re kept separate from the “teaching lab,” which relies on cadaver donations used in anatomy classes.

I asked Strait a series of hypothetical questions, which he batted at, one after another. What if we knew the bones were not Native American? Well, even if the department knew that, it’s not obvious there would be someone to return them to. What if we never figure out who they belong to? Strait threw the question back at me, holding his hands up as if in surrender. “What would you do? I mean, we’re not going to go to Forest Park and dig a hole.”

WashU is not the only university faced with the conundrum of unmarked bones in the basement. The San Francisco Chronicle published an article in 2018 titled “UC Berkeley Struggles with how to return Native American Remains.” Professors and experts quoted refer to the “ethical dilemma” and talk about “cultural repatriation.” Another piece, published by The Conversation, details how the University of Cape Town uncovered 11 skeletons, collected decades ago that “research suggested should not be at the University.”

Yet underneath the buzzwords and best intentions, the bones often remain untouched and unclaimed. WashU’s particular individuals are kept in a temperature-controlled storage room, on the ground level of the anthropology building.

For now, WashU’s mark of shame isn’t being erased any time soon. Strait said that for the foreseeable future, the unmarked bones are here to stay. “We want to do what’s right with the stuff. And that might entail hanging on to it,” he said.

It was the impulse to do the right thing that led to Strait’s startling discovery about the Terry Collection. The Science article reported that most of the individuals were “poor and institutionalized,” and over 50% Black. These facts, along with the 36-hour rule, raised doubts on whether the deceased or their families ever consented to donation.

Dr. Geoff Ward, professor of African and African-American studies, helped the researchers contextualize the life of the person studied in the collection. He was first approached for the project in 2020. “It was clear that we needed to spend more time on this discussion of structural racism in St. Louis, particularly in relation to the medical profession,” Ward said in the piece.

Ward wasn’t surprised to learn that the Terry Collection took advantage of Black and populations with low socioeconomic status. The societal and legal rules at the time allowed for white supremacy, which laid the groundwork for Terry to collect bodies in the way he did.

“If living African Americans had no rights, in this context of white supremacism, surely this applied to the deceased,” Ward said. He was surprised, however, to learn that part of the Terry Collection was held at WashU, despite having researched the history of the individuals. “I was under the impression that the entire collection had been donated to the Smithsonian,” he said.

The article threw the anthropology department into chaos. Though the Terry Collection individuals haven’t been used this semester, they had been handled by classes in previous years. Strait struggled to articulate the reason for his visceral reaction to the discovery that students and faculty have been handling the bones of the dispossessed. “I guess it would be the families,” he said finally. “What happens after death is mostly for the living. Not for the dead.”

In the meantime, the individuals in the Terry Collection have been retired from classroom use. They still remain in the teaching lab, separated into drawers by code that detail collection and type. Norin, like Strait, also struggled to articulate what he thought would be the most moral decision for the individuals. “It’s not right for students to use them. It’s also not right just to put them in a box and forget about it,” he said. “But it feels impossible to rectify anything.”

The Smithsonian has restricted access to the collection, specifically putting a ban on any research that would use Black individuals.

Both the archeology and anatomy departments are combing through the records and calling former faculty, hoping someone knows more about who these people were and how they came to be in the University’s basement.

But how can an institution right a wrong done to someone who has been dead for a century? Strait said he won’t be the one deciding what happens next. The final solution will be decided on by the entire anthropology department, any administrators or professors that want to be involved, and members of the community who could share expertise. “We want to make sure that we’re on the right side of history going forward,” Strait said.

Ward believes that the best thing to do is to publicize what has been found. “I don’t know what to do with the bones. That’s not my field. But I think we should certainly find ways to pay respects that are long overdue,” he said. “I think we have a responsibility to do that. We didn’t make those decisions in the past, but here we are faced with the question of what to do with [the remains].”

Even though he’s far from the final say, Strait outlined a few possibilities. Ideally, living kin members would be notified so they could decide on the fate of their ancestor. If that’s not possible, the bones could be cremated or re-buried. There may be a commemorative ceremony to lay the dead to rest.

Otherwise, they may remain in the university’s basement indefinitely: unnamed, untouched and unclaimed.