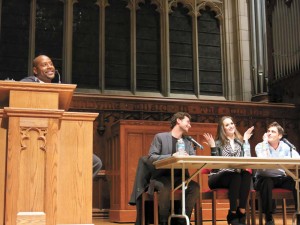 Not among the topics discussed, however, was Deen’s public opposition to Los Angeles County’s Measure B, passed in November, which requires adult film actors to wear condoms while performing sex acts.

“It’s pretty incredible that there are a lot of girls in the industry that do charge more [for interracial scenes], and I think that’s disgusting,” Black said.

The final question of the night, seeking advice from the panelists about getting involved in the adult film industry, caused a stir among students in the audience.

“I thought most of the questions were really good except for the last one. That’s not very applicable to…most people there [at the panel], considering there were three people who raised their hands, and most of them were probably joking,” junior Varun Sablok said.

Most students seemed to enjoy the panel as most of the panelists’ responses were punctuated by applause and laughter from the audience.

“I really liked the panelists. They played off of each other really well, and they told entertaining stories,” junior Colin Rice said.

Motivations for attending the panel varied among students in the audience.

“I have a lot of friends [involved] in Sex Week planning, and they told me to come,” Rice said.