AST returns to Brookings’ outside stage with ‘Jerry Finnegan’s Sister’ 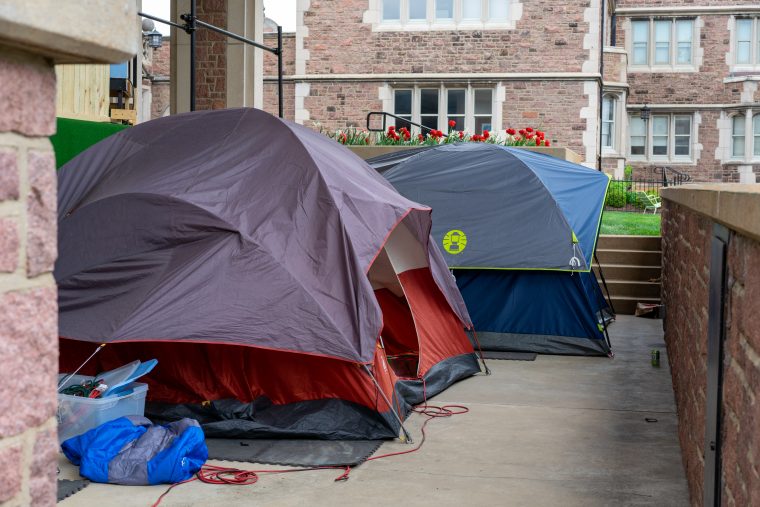 The tents in Brookings Quad where members of All Student Theatre have been set-sitting 24 hours a day. (Photo by Holden Hines)

For nearly three weeks, All Student Theatre (AST) has been camping on Brookings Quad in honor of their first production of the year, “Jerry Finnegan’s Sister.” After a term of hardly any live events, AST will conduct one of the largest events Washington University has seen in quite a while  with their virtual performance. Production manager Jack Maleczka reflected on how this year has gone for the team.

“For the two to three weeks that we are working on the set, we have someone on the quad 24/7. The first three days are dedicated to building. This is really hands on, and a lot of the team works on it even if they aren’t part of carpentry or stage design. The following days are for set touch up, painting and lighting. And finally, our last week is tech week. This is the time where we put all of the moving components together. Rehearsal starts, we test the lighting and sound and eventually, we do full run-throughs.”

It has been an interesting experience for AST this semester一rehearsal has been over Zoom, technical planning is virtual and there are only two actors. This year’s production, “Jerry Finnegan’s Sister,” is a story that follows two characters, Brian and Beth, through their childhood and young adult life. Beth is Brian’s best friend’s sister, yet Brian has a devastating crush on Beth despite her commitment to other relationships. As Leah Coleman, Beth’s actor, describes it, “It’s 15 years of life within one hour.” Surprisingly, the titular Jerry Finnegan never actually makes an appearance in the show.

Leah is a freshman who has done theater all her life, yet the AST experience is completely new for her. “I literally think I had a breakdown when I heard how much time I had to be [on Brookings Quad]. After actually being here though, I started coming more and more.”

AST has been a really inviting part of Leah’s freshman experience, asshe has been able to experience parts of theater beyond just acting, including the more technical aspects of the process.

There are 23 people of all years on board and production for AST, and many members hold multifaceted roles. Leah explained that although she didn’t necessarily plan on helping with lights, microphone work and other technical jobs, Leah was impressed by how willing the rest of the crew was to teach and expand her theater knowledge.

Junior Dom Bottom, Brian’s actor, has been involved in AST for a few years now and continues to prove that performers can stem from diverse areas of study. As a computer science major, Bottom impressively juggles his passions while still presenting a strong commitment to AST.

This year, Emma Thorp, the club’s president, doubled as the director. Thorp’s proposed play, “Jerry Finnegan’s Sister,” was the perfect production for this year considering that there are only two actors, making it easier to follow COVID-19 guidelines. In addition, this lighthearted comedy provides an easy transition back into watching theater. I feel that many people can benefit from the leisure of watching a comedy, as it gives us a glimpse into a more hopeful future where live theater can return.

Links to the live streams will be made available on the All Student Theatre WUGO page, and free virtual tickets can also be requested through forms on the AST social media pages. Streaming begins the weekend of April 23, and the specific times are still to be determined. Viewers are also able to email [email protected] for more information.