‘John Carter’ Goes to Mars, and What a Trip It Was 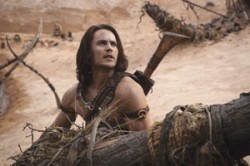 Tomorrow, Disney will release its newest live-action film, “John Carter,” which stars Taylor Kitsch as the titular John Carter, a Civil War veteran who inexplicably finds himself transported to Mars. I participated in a conference call with Kitsch and director Andrew Stanton (“WALL-E,” “Finding Nemo”) to provide you with a little information about the film.

A Pixar star, Stanton had never directed a live film before “John Carter.” He decided to take on the project because he was a fan of the Edgar Rice Burroughs books on the same subject, and he wanted to see it realized on-screen. He described the experiences of live action and animation as very similar. Whether you’re talking to cameramen and actors or just animators, it’s pretty much the same thing. The film, set on Mars, used a lot of CGI to create its alien characters, and that’s where Stanton found the trouble with live film.

First came the live action, then the computer animation. The film begins in 1868 in the Arizona Territory. During this section, the audience learns how and why Carter lands up on Mars. The rest of the film takes place in outer space, and it’s chock-full of CGI to create the mostly alien world. It’s a complicated story, and the whole process took more than two and a half years to film. But according to Stanton, it was all worth it.

“I’m a huge fan,” Stanton said about the book series. “I’ve read the books my whole life. And I wanted to see them [come to life]…So I didn’t want it screwed up, and then that’s really how I got pregnant with this idea.”

And so he approached Disney about creating it, and Disney said yes. They soon decided to cast Kitsch in the title role. He’s probably most known for his role as Tim Riggins in TV show “Friday Night Lights,” but he also had a important role in “X-Men Origins: Wolverine.” His role in “John Carter” is his first lead in a film, and he was very excited for the opportunity. He decided to sign on because Carter was not just an action hero but also a character with a rather complicated back-story.

“It’s the arc of who I got to play—the guy that’s lost his cause completely,” Kitsch said on why he took the role. “And then through this action and through these people that came into his life, they really just do shine the light back in.”

Kitsch didn’t have trouble transitioning from TV to film, either, since he actually started his career out in film. He says filming “John Carter” was a physically exhausting experience, but one that was totally worth it.