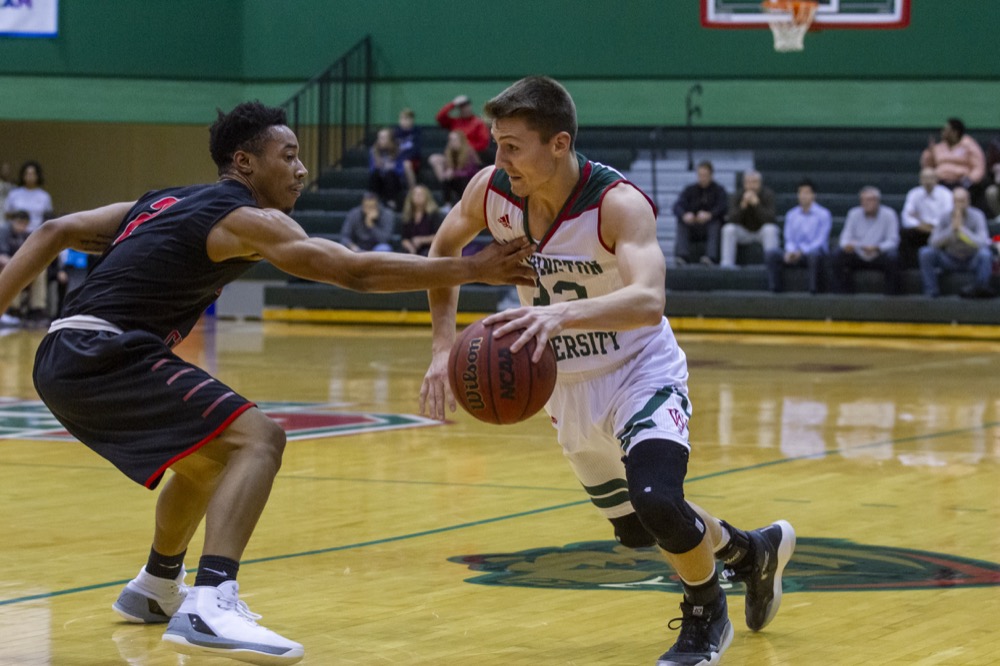 It was a gritty game, as both teams struggled offensively and worked for every point. Neither team was able to establish a convincing lead at any point, forcing the game to come down to the wire, where Nolan’s heroics ensured a positive start to the Bears’ season.

“It felt exhilarating,” Nolan said. “Having the crowd back in the gym was super energetic and I think a common theme we were all saying after the game was how fun it was to be back out there.”

Nolan is playing a fifth year for the Bears as he completes a one-year Masters of Finance program and takes advantage of an extra year of eligibility after last year’s season was canceled due to COVID restrictions.

The first half was a back and forth affair, as each team attempted to create separation. Nolan, the University Athletic Association’s leading scorer during the 2019-2020 season, struggled with his efficiency early, missing some key shots that could have helped WashU build a more commanding lead. A key and-one from freshman Hayden Doyle put the team up 24-21 with 4:41 left in the half. The first half ended with the Bears ahead 26-25.

Coming into the second half, WashU came out flat. Millikin was able to go on a seven-point run, punctuated by senior Michael Akinwumi running the floor and throwing down a dunk to go ahead 37-30. Nolan came back down the floor and hit a jumper, jumpstarting the offense and pushing WashU on a run of their own. With around 10 minutes left, a Doyle layup knotted the score at 37.

Milikin responded with a three-pointer, a defensive stop and another three, pushing their lead to 45-39. WashU responded with urgency, going on 8-2 run to tie the game at 47. The two teams traded baskets; with seven seconds left, WashU found themselves down by two. In their final chance, the team got the ball to  Nolan, who created separation and fired a three at the buzzer from right above the key. The shot was good, giving the team a crucial 52-51 win.

It was a scrappy team win from WashU, as everyone contributed defensively to get stops on the defensive and force misses from Milikin. There were no real offensive standouts, as the team shot only 32.7% from the field, but Nolan led all scorers in the game with 22 points. This came on 7-19 shooting, but every shot he made was key to leading to the win. Senior Justin Hardy was tied for second-highest scorer for WashU with seven points on 2-5 shooting, but he also contributed seven rebounds to lead the team as well. In his first game, Doyle also scored seven points, but only shot 3-11 from the field.

The Bears will next travel to take on Webster University Tuesday evening.

Athlete of the week: Jack Nolan dishes about stepping into bigger shoes

“I could take a team of five”: Kameron Mack talks collegiate, casual basketball

Reinmiller is priming the Bears for a playoff run, both as a player and as a coach