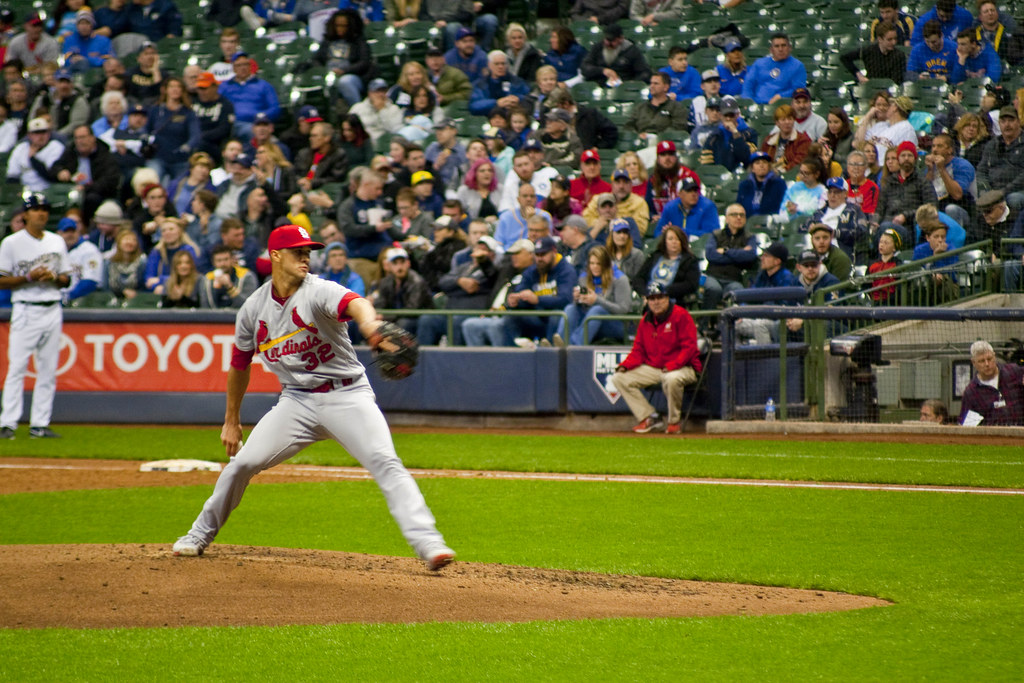 St. Louis Cardinals pitcher Jack Flaherty in a 2018 game against the Milwaukee Brewers. Flaherty will appear out of the bullpen in the postseason as he recovers from injury. (Photo courtesy of CE Miller photography via Creative Commons)

After a wild 162 game season, the Major League Baseball playoffs return to their normal format, as 10 teams will once again compete for the championship. Will the Los Angeles Dodgers repeat? Will the San Francisco Giants prove they were this season’s best team? Will the Tampa Bay Rays finally win a championship? Below are the key stats and information, along with predictions, for this year’s playoffs.

How they got here: The Rays, as always, are paced by their superb bullpen that leads the league in innings pitched, strikeouts and ERA. Their offense is second in the American League with 857 runs, and Brandon Lowe has been a consistent force with 5.3 WAR and a 137 wRC+.

What could be their downfall: With the second fewest starting pitching innings in the league, Tampa Bay’s staff might not provide enough distance, which could tax their bullpen. The team’s .743 OPS against left-handed pitchers, which ranks last among American League postseason teams, could also be a concern.

X-Factor: Wander Franco. The superstar rookie returned in late September from a hamstring injury and his switch-hitting bat is key in the middle of the Rays lineup. His 43 game on-base streak tied Frank Robinson’s record for players 21 years or younger.

How they got here: Houston had the best offense in the AL this year, posting a league leading 116 wRC+ to go along with the lowest strikeout rate at 19.4%. Carlos Correa and Jose Altuve each posted over 5 WAR, while Kyle Tucker led the team with a 147 wRC+. Lance McCullers Jr. paced the pitching staff with a 3.16 ERA in 162.1 innings.

What could be their downfall: The Astros’ pitching staff has a 9.1% walk rate and 26.9% chase rate, both of which are worst among American League postseason teams. Houston will need to limit free passes and hope opponents expand the zone more in their postseason run.

X-Factor: Alex Bregman. The All-Star third baseman has battled injuries all year, only playing 91 games. However, his .270/.355/.422 slash and 115 wRC+ show he can be the difference maker for an already-potent Astros offense.

How they got here: Chicago dominated the AL Central behind a strong pitching staff that led the American League with 27.1 WAR and average fastball velocity of 95.5 mph. Carlos Rodon, Lance Lynn, Lucas Giolito and Dylan Cease paced the starting rotation, as each had an ERA under 4.00, and Liam Hendriks was the best closer in baseball this year, leading the AL with 38 saves and a 42.3% strikeout rate (minimum 60 innings pitched).

What could be their downfall: Beating the best teams. While Chicago dominated sub-.500 teams, going 66-40 in those games, they only went 27-29 against winning teams. The White Sox also struggled down the stretch, only going 39-34 since the All-Star break. The question is whether they have been coasting knowing they have had the division wrapped up or if their second half record more resembles the team heading into October.

X-Factor: Carlos Rodon. Rodon was a leading candidate for AL Cy Young before missing time in the second half with arm fatigue. He returned on Sept. 29 and pitched five scoreless innings, giving Chicago more confidence in his availability heading into the postseason. Rodon had a stellar season, posting a 2.37 ERA and 4.9 WAR across his 24 starts.

How they got here: Boston was led by their offense that finished top three in OPS, hard hit percentage and average exit velocity. Xander Bogaerts, Rafael Devers and Enrique Hernandez each had over 4 WAR, while Nathan Eovaldi led the pitching staff with a 3.75 ERA in 182.1 innings.

What could be their downfall: A shaky bullpen could spell doom for Boston. The Red Sox’s 4.57 bullpen FIP in the last 30 days is the worst among AL playoff teams. However, Boston’s best reliever, Garrett Whitlock, was just activated off the injured list, so he could provide the bullpen boost the Red Sox desperately need.

X-Factor: Alex Cora. The World Series champion manager guided Boston back to the postseason after being suspended for the 2020 season. Cora’s aggressive managing style coupled with his tendency to use starting pitchers out of the bullpen could give Boston an edge.

How they got here: The Yankees were led by a deep pitching staff that ranked top two in the AL in staff WAR and chase rate. Gerrit Cole was a Cy Young contender, and Jonathan Loaisiga was one the best relievers in baseball, ranking in the 99th percentile in chase rate. Aaron Judge paced the offense posting a 148 wRC+, which ranked third in the American League.

What could be their downfall: An inconsistent offense. While Judge and Giancarlo Stanton were each top nine in wRC+ in the American League, Anthony Rizzo was the only other statistically above-average hitter on the Yankees. All-Stars Gleyber Torres and Joey Gallo will need to get hot to take some burden off of Judge and Stanton.

X-Factor: Luis Severino. The two-time All-Star returned this September for the first time since 2019, pitching six scoreless innings out of the bullpen. Severino could be used in a variety of roles this postseason as Manager Aaron Boone navigates his deep and talented bullpen that ranked second in the American League with a 3.56 ERA.

ALDS: Rays over Yankees in 4; Astros over White Sox in 3

ALCS: Astros over Rays in 7

How they got here: With baseball’s best record, the Giants were the surprise team of the season. They had a balanced attack, finishing top five in both offensive and defensive war, with veterans Brandon Crawford, Buster Posey and Brandon Belt pacing the offense, as each finished with a wRC+ of at least 139.

X-Factor: Brandon Belt’s thumb. Belt fractured it on Sept. 26 and is out indefinitely. The Giants are unsure when or if he will be able to return this season. Missing his elite bat and leadership on the field would be a big blow to the Giants, as Belt has a 158 wRC+ and ranks in the 94th percentile in barrel percentage.

How they got here: An elite pitching staff carried the Brewers, as Milwaukee finished top three in the National League in pitching WAR, ERA and FIP. Corbin Burnes is a Cy Young candidate, posting a 1.63 FIP that ranks 15th all-time for a pitcher in a single season. Willy Adames led the offense with 3.8 WAR after coming to Milwaukee in a mid-season trade with Tampa Bay.

X-Factor: Bullpen depth. With star reliever Devin Williams most likely out for the season after he broke his hand in a brawl with the locker room wall, Milwaukee’s other relievers will need to step up. While Josh Hader has had an outstanding season anchoring the bullpen, relievers such as Brad Boxberger and Brent Suter will need to fill larger roles than previously thought.

How they got here: Despite a slow start, the Braves pulled away after the trade deadline in a weak NL East. Ronald Acuna Jr.’s season-ending injury left the Braves without their best player, but Freddie Freeman and Austin Riley picked up the offense, with each posting a wRC+ of at least 135. Atlanta’s offense also had a 40.7% hard hit percentage, which is best among NL postseason teams.

What could be their downfall: Their bullpen. The Braves had a 4.01 bullpen ERA this season, which is worst among NL playoff teams. Atlanta’s bullpen especially struggled in the ninth inning, giving up 50 earned runs, with only St. Louis being worse among NLpostseason teams.

X-Factor: Starting pitching. Charlie Morton and Max Fried anchored a starting rotation that had the best ERA in the NL during the last 15 days of the season. However, unproven youngsters Ian Anderson and Huascar Ynoa must step up to match the superb pitching of Milwaukee.

How they got here: Despite falling one game short to the Giants, the Dodgers might be the best team in baseball. They had the best run differential at +269 and have all-star players all over the field. Starters Max Scherzer, Walker Buehler and Julio Urias all had over 5 WAR, while mid-season acquisition Trea Turner and returner Max Muncy each had MVP-caliber seasons.

What could be their downfall: Injuries. Clayton Kershaw might be out for all of the postseason with an arm injury, while Muncy will miss the wild-card game and likely the NLDS (should the Dodgers advance) after suffering an elbow injury in the final game of the regular season. The Dodgers have the best depth in the MLB, but injuries to critical players could impact them should Los Angeles advance in the postseason.

X-Factor: Kenley Jansen. The Dodgers have elite starting pitching and position players, so a strong bullpen will make or break their postseason journey. The key to their bullpen is Jansen, who posted 1.8 WAR, his best since 2017. If Jansen is lockdown closing games for Los Angeles, the Dodgers will be tough to beat.

How they got here: An MLB-high 17 game win streak propelled the Cardinals from 2.8% playoff odds on Sept. 7th to the second NL Wild Card spot. Tyler O’Neill had a breakout season, totaling 5.3 WAR, while Paul Goldschmidt was red-hot down the stretch, slashing .340/.440/.701 with 9 home runs in September.

X-Factor: Jack Flaherty. The Cardinals’ best starting pitcher over the past few years will be working out of the bullpen after coming back from injury. If Flaherty can be effective, he will be a key weapon for manager Mike Schildt as he tries to navigate the bullpen.

NLDS: Dodgers over Giants in 4; Brewers over Braves in 4

NLCS: Dodgers over Brewers in 6

World Series Prediction: Dodgers over Astros in 6. Behind the deepest and most talented roster, I expect the Dodgers to repeat as champions. If Los Angeles can escape the vaunted one game wild-card they will be the favorites to win the 2021 World Series.

A Moose tale: Putting a childhood hero into words

A love letter to my city’s spirit…creature: Why Gritty is so much more than a Cheeto-furred mascot

Matt’s Musings: There’s more than one GOAT in professional soccer