A love letter to my city’s spirit…creature: Why Gritty is so much more than a Cheeto-furred mascot 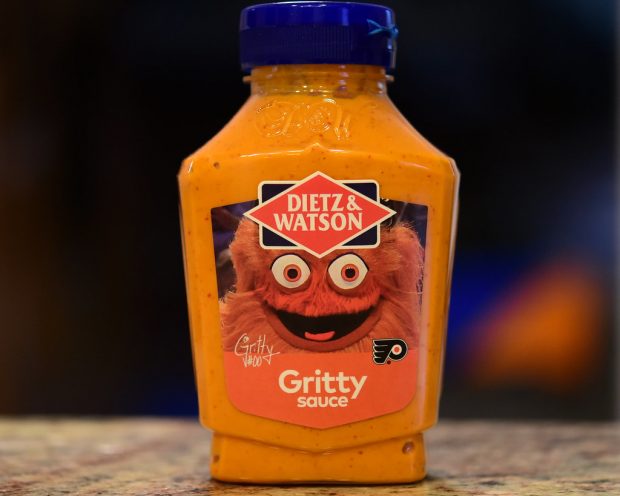 An image of the mascot on a jar of Gritty sauce. (Courtesy of Creative Commons | slgckgc)

Most people make two inferences when I tell them I’m a Philadelphia sports fan: First, that I likely have a drunk and disorderly on my permanent record (were this the case, I would still be fine—Philly cops are slow, and I, friends, am not slow). Second, and more pertinent to this article, is that my days as a fan have been riddled with anger, disappointment and pain, a cruel cycle of shattered hopes and broken promises. Much like our famous Liberty Bell, the sports in our city have been inflicted with an irreparable crack running down their side, a flaw that has come to define us.

You see, unlike other major cities in the American pantheon, Philadelphia has relatively little to show for its long tenure in professional sports. New York has the Yankees, Boston is known by its insufferable fan base as “Titletown,” Chicago had Jordan in the ‘90s and the list goes on. Meanwhile, the Phillies have the worst winning percentage of any non-expansion team in baseball history, the Sixers have just now wiped the clown makeup off their faces after years of “The Process” and until 2018, the Eagles stood out amongst title-less NFL teams for having  the rowdiest fans without the hardware to back it up—a loud dog with no bite. And given the current disarray of the entire franchise, it seems we exhausted the city’s last drop of luck when Nick Foles walked into the end zone on the Philly Special. One would expect the fans to eventually accept mediocrity and end this charade were it not for the hope.

Perhaps this is how Philadelphia earned its reputation for being the toughest sports city in America. Pain hardens even the best of us, and the average Philly fan endures enough for a lifetime by his 18th birthday. We’ve been characterized as violent, irritable and impossible to please. All of the pain, they say, has turned us sour; we’re the people that threw snowballs at Santa (he had it coming); we have a jail cell in our football stadium; opposing fans come to “test the rep” and quickly regret it. This doesn’t mean however, that we’re the Grinches of the sports world. When we lay into our players for underperforming, or we boo the Eagles off the field at halftime, it’s not out of genuine spite. It’s a defense mechanism, a vain attempt to avoid further trauma by pretending to lose hope. And that’s our folly: For all the anguish, the unexpected heartbreak, the rug being pulled out from underneath us, the Philadelphia faithful are exactly that—faithful. We’ll get our hearts broken, but year after year we return, passionate as ever, with hope. To play in Philadelphia requires the daunting task of being accepted by our notoriously thorny fanbase, but once you’ve done it, the city will reward you with loyalty. Nobody earns a reputation for being quiet. Listen to some of the Philly greats—Brian Dawkins, Chase Utley, Allen Iverson—talk about their time in the city of brotherly love, and they all say the same thing: Once you’ve earned it, once you’ve proven you can take a shot and get back up, you’ll have a city behind you.

I’d like to preface this by saying I’m not really a hockey fan. I don’t watch the NHL, and the only professional hockey I’ve ever witnessed was a minor league Philadelphia Phantoms game at my friend’s eighth birthday party—he got to ride on the Zamboni, and I seethed with jealousy for the rest of that night. I am, however, a diehard supporter of one thing in the hockey world: Gritty. For those of you unfamiliar with the phenomenon, Gritty is the mascot for the Philadelphia Flyers, and has been since 2018 when he announced his arrival on Twitter with an outright terrifying photo of himself and the caption: “It Me.”

The idea for Gritty was conceived during a ketamine-induced fever dream in the bathroom of an Outback Steakhouse, where his creator sketched a rough portrait on the bathroom wall out of blood and feces before keeling over from the seven Bloomin’ Onions in his stomach. This is the only reasonable explanation I can come up with for how something so strange, so heinous and so undeniably perfect could have been born. At first blush, the Cheeto-orange fur, the menacing, dead eyes and the pure chaos he incites is nothing but a marketing gag to attract young fans to Flyers hockey. But upon further consideration, this complete anomaly, this glitch in the sports matrix, perfectly captures the Philadelphia fandom in its rawest form. He’s the Broad Street Bully in a terrifying, thrilling bottle: crass, unapologetic, fiercely loyal and downright hilarious. For a city that embodies the phrase “and I’ll do it again!” there is no better choice for a mascot.

I grew up adoring the antics of the universally-beloved Philly Phanatic, and while his popcorn throwing, corny dance moves and stomach gyrations (you read that right) still get a laugh out of me, Gritty seems to better embody the wild, temperamental impulses of our fanbase. Everything he does, while never quite shaking that concerning air of violence, stems from a genuine love for his team. He tackles children and then dances on top of them. He throws cakes at opposing fans. He goes streaking. Only recently was he cleared of the assault charge filed against him for allegedly punching a Penguins fan. For a sports culture and city as a whole so snake-bitten by bad luck and disrespect, Gritty has instantly become a perfect embodiment of both our basest instincts and our greatest potential. Through Gritty, the Philadelphia faithful can express what words cannot. Like a spiritual shaman, he embodies the anger, frustration and immense love we have for our teams and our city.

It took a mere 12 hours for the city of Philadelphia to back Gritty. Of course, on his announcement, the entire sports world burst into hysterics (and confusion)—a seven-foot Tickle Me Elmo doll dipped into a vat of orange Fanta seemed ill-fitted to represent a hockey team. But when the cross-state hockey rival Pittsburgh Penguins’ Twitter captioned Gritty’s admittedly disquieting intro post with “lol ok,” Gritty immediately responded with a threat: “Sleep with one eye open tonight, bird.”

Philly fans will wax poetic on the raging incompetence of everything about our teams, but we can do that because we’re their fans, and at the end of the day, we support them no matter what. And when someone attacks one of our own, we come to their defense. Philly is a place for broken toys that no one else will keep; Gritty may look like he hides bodies in a locker, but he’s flawed in the same way that makes Philly special. Nobody attacks our own. When Gritty responded so quickly, so aggressively, to an outsider’s criticism, he showed the city that he was worthy of represent them. Since then, his viral antics and downright misbehavior have only further ingratiated him to the fanbase.

There’s something so satisfying about Gritty being exactly where he belongs. If in 2018, he had been announced as, say, the new mascot for the Detroit Red Wings, he would simply be the punchline of the sports world, a strange, useless apparition without a true home. But in Philadelphia, he can flaunt his most eccentric qualities in a city that values audacity, and so long as he supports the teams we love, we’ll support him right back. Scrolling to the bottom of his official NHL webpage, I came across the “Gritty C.O.M.M.A.N.D. Center,” an experience that allows fans to “get grittified by professional stylists while taking in the sights, sounds and smells of Gritty’s lair.” I cannot think of a more frightening way to spend my money. I might just do it.

Student Life sports writers reflect on the many idiosyncracies of the athletics world:

Imagining a new era of Wash. U. pride