The playoffs are a different animal, they say. Someone apparently forgot to inform the Washington University women’s soccer team.

The Bears made a mockery of the postseason’s opening weekend, treating it as a continuation of the regular season with a pair of shutouts at Francis Olympic Stadium. With a 5-0 win over Westminster College Saturday and a 3-0 victory over Illinois Wesleyan University Sunday, Wash. U. moved to 19-0 in 2018. 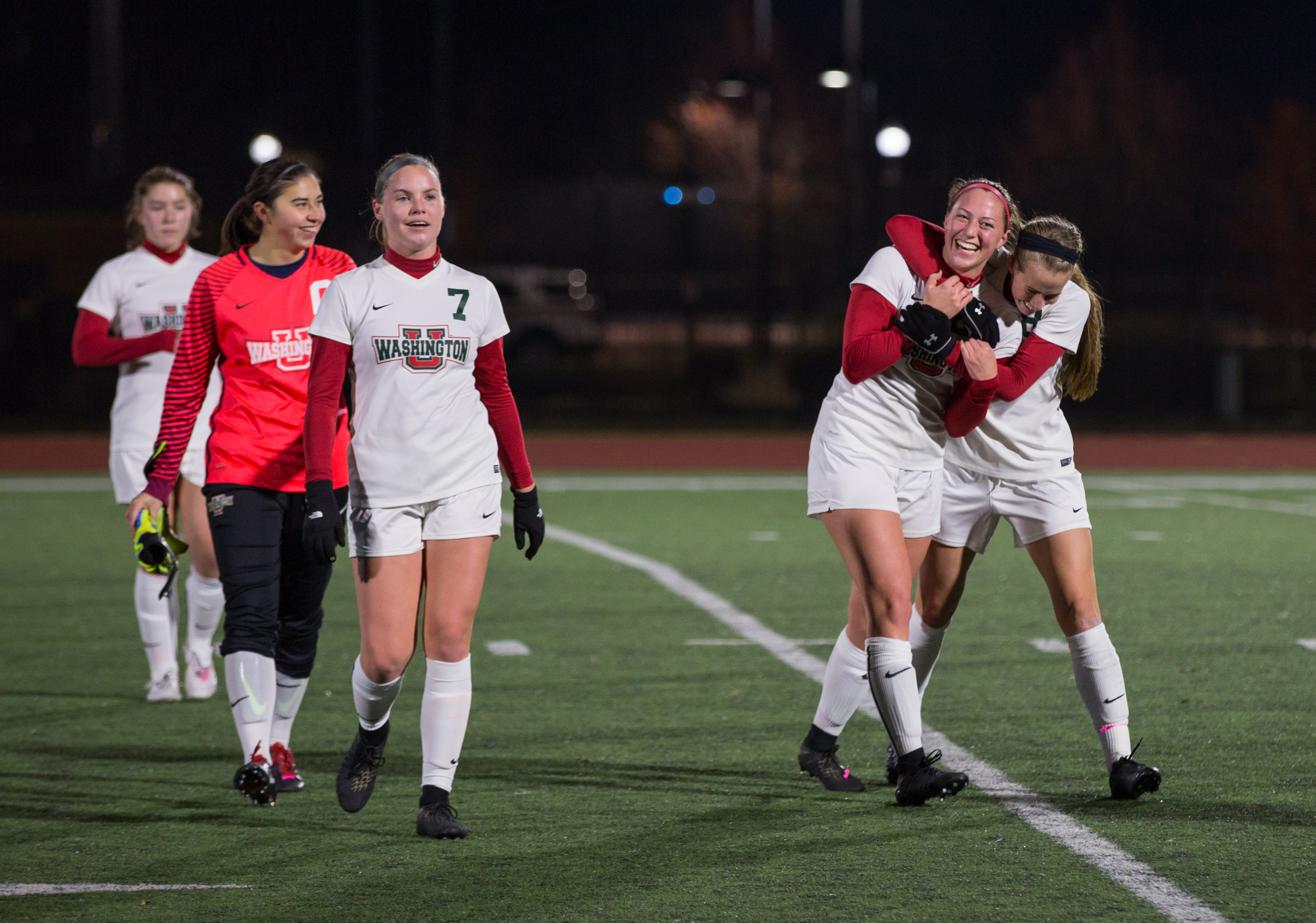 Wash. U. women’s soccer players celbrate after winning the first two rounds of the NCAA Division III Tournament. The Bears defeated Westminster College 5-0 Saturday and Illinois Wesleyan University 3-0 Sunday. The No. 1-ranked Wash. U. team will take on Wisconsin-LaCrosse in the Sweet 16 Friday.

In the NCAA Division III Tournament’s first round, Wash. U.—hosting the regional for the third straight year—faced Westminster for the first time in 12 years with a chance to create the longest winning streak in program-history. As far as dominance goes, most of the first half was relatively quiet scoring-wise. That changed in a snap, however, with Wash. U. going on a characteristic tear to rip off three goals in a nearly ten-minute span.

Junior forward Taylor Cohen, of course, got the Bears off and running, cashing in a give-and-go from her partner in the front, sophomore Ellie Moreland, in the 29th minute. Cohen only took two shots all night, indicative of the Red and Green’s incredible depth: 17 players took a shot, yet Cohen’s was the only one necessary to win the game.

Senior forward Jessica Ridderhoff accentuated that point: Minutes later, she headed a ball in from 10 feet for her first goal of the season—in the playoffs, no less. The give-and-go theme returned after another few minutes, when freshman midfielder Erin Flynn fed fellow rookie forward Marissa Kalkar for a 3-0 lead.

The Red and Green didn’t get complacent out of the break, either. Within five minutes of play restarting, sophomore back Caitlin Reice added a goal to her career statistics off a corner kick. The Bears outshot Westminster in the corner, 16-0.

Kalkar added the finishing touches on a sensational performance with her second score of the evening in the 82nd minute.

All in all, it was a thorough thrashing of the Blue Jays. The Bears took 48 shots, their most since September 20, 2015, and allowed none, their second such performance this season. Sophomore goalkeeper Emma Greenfield saw no action for 71 minutes before being replaced by freshman Mary Frances West.

Head coach Jim Conlon said that the win was important because it highlighted the Bears’ greatest attribute: their team-first mentality.

“The win tonight was a great way to start the NCAA tournament,” Conlon said in an interview with Wash. U. athletics. “We are happy to play well against a quality opponent. I’m proud of the effort of all the women tonight to help a complete team effort.”

Freshman Erin Flynn takes a shot on goal against Illinois Wesleyan University Sunday. The Bears will advance to the next round of the NCAA Division III Tournament after they defeated Westminster College 5-0 and Illinois Wesleyan 3-0 this weekend.

History repeated itself the next evening, as Illinois Wesleyan returned to St. Louis for a second round matchup 10 years after coming up short to Wash. U. in the same setting. This time, the Bears didn’t leave their fate to penalty kicks, scoring 20 seconds in and never looking back in a 3-0 laugher.

“Illinois Wesleyan got off to a hot start yesterday,” Conlon said in an interview with Wash. U. athletics, referring to the Titans’ 3-0 start against Mount St. Joseph University Saturday. “We wanted to match that.”

Match that they did. Cohen made sure the Red and Green would play in the green yet again, this time in just 20 seconds. She took advantage of a misplay by the Illinois Wesleyan goalie, taking a cross from freshman forward Ariana Miles for a fortunate one-timer and putting the Titans on their heels for the final 89 minutes and 40 seconds.

In a case of deja vu, Miles (along with Flynn) fed Cohen yet again in the 10th minute, and, timing on point, Cohen delivered another one-timer for her third goal of the weekend. The ultra-efficiency was a point of consistency for the star, who scored her two Sunday on just three shots.

Sophomore Kristen Reikersdorfer delivered on Conlon’s expectations, going solo from 20 yards out early in the second half to make it the desired 3-0.

Wash. U., while not as dominant as the previous night, managed to outshoot the Titans 25-2, including 9-0 in corner kicks. Greenfield played the full 90 minutes and made a save to maintain the shutout.

The eight goals over two contests raised the Red and Green’s average to three goals per game, while the defense pitched its 15th shutout of the 19 wins.

This upcoming weekend becomes potentially dicey for a Wash. U. team that hasn’t faced much adversity thus far. Friday evening, the Bears take on No. 23 University of Wisconsin-La Crosse, one of the few programs in the nation with an all-time winning record versus Wash. U. UW-La Crosse, of course, is the team which ended Wash. U.’s 2017 season, shocking the then-No. 5 Bears in the same round a year ago.

If the Red and Green exact revenge on UWL, they’ll take on either No. 4 Centre College or No. 15 Wheaton College. Wheaton is one of the few teams to prove it can score on the Wash. U. defense this season, dropping a 2-1 affair less than a month ago; it, like La Crosse, has had Wash. U.’s number historically. Centre, at 21-0, is a behemoth—the only other undefeated team in the country.

No matter the path, the Bears will have their hands full this weekend. Wash. U. will host the sectional weekend as it looks to advance to the Elite Eight.