With attendance lagging, Bears could use a few new ideas

About a month ago, I showed up to a Friday-night Washington University men’s basketball game about 30 seconds after tip-off. Despite my tardiness, I wasn’t worried about finding a seat because, after all, it’s Wash. U., so I strolled into the Field House as normal.

Little did I expect to find the lower-level bleachers nearly full or to have to squeeze myself onto the edge of a row in the student section to watch the game from up close. But 1,245 fans packed into the Field House that night for the battle of top-six teams, and it seemed like all 1,245 were there to stomp and cheer as the No. 6 Bears dominated visiting No. 5 Emory University, 80-67. 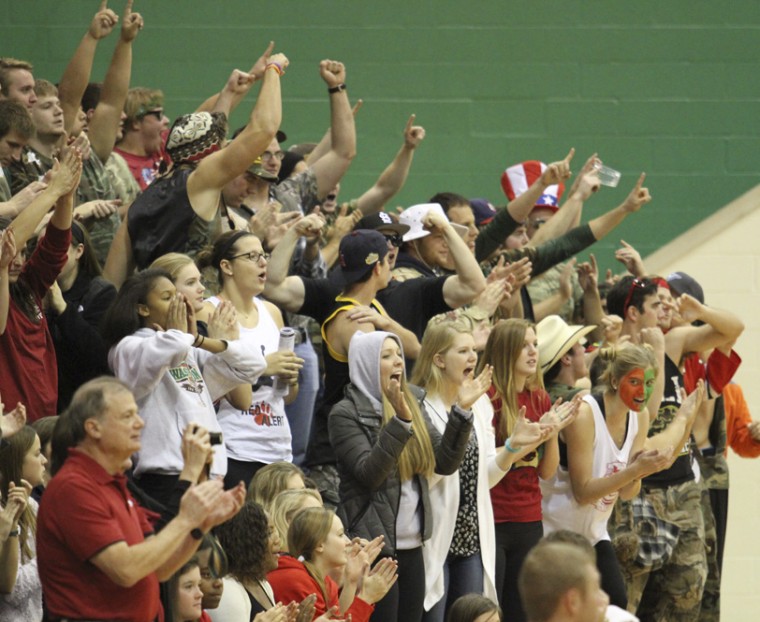 The student section at the Washington University volleyball team’s NCAA third-round contest against Emory University cheers after a Bears point. The game had 582 spectators, many of them students, around 400 more than the average home volleyball game from the 2014 season.

It was the most excited I had ever seen students at a Wash. U. game, but unfortunately, it was quite the anomaly.

At the beginning of the school year, new Athletic Director Josh Whitman explained that boosting student attendance at games was one of his top priorities in taking the Wash. U. job.

“It doesn’t concern me. I think it’s an opportunity and a challenge,” Whitman said in September about the school’s low attendance rates in years past.

Unfortunately for Whitman thus far in his Wash. U. tenure, that challenge has persisted. Besides men’s basketball, the other ball sports in 2014-15 have posted attendance numbers similar to or below recent years.

The volleyball team had its lowest average attendance for any year since at least 2006, which is as far back as Bear Sports’ archives go. The men’s soccer team in a down season had fewer fans than any year since 2004. And while its male counterpart is flourishing with fans, the women’s basketball team—despite ranking in the top 10 in the country with a 19-1 record—has drawn only 446 fans per game, which over a full season would be its lowest total since at least 2000.

Without ticket sales, those numbers are estimates rather than precise tallies, but they still function as reasonable stand-ins for attendance, making that downward trend worrisome.

Now, for a Division III school, even that many fans is still relatively unusual. Relatively comprehensive attendance data on the NCAA website is only available for football and men’s and women’s basketball, but the numbers are still plenty revealing. In the most recent year collated on the site, the average Division III football team drew just more than 2,000 fans per game, a significant portion more than Wash. U.’s 1,218 that year—for comparison’s sake, the average Division I team that year had more than 45,000 fans per game.

But football is an outlier for Wash. U. and is generally one of our weaker teams. We’ve performed better in basketball, where we rank well above the average Division III team in both men’s (393 people per game) and women’s (230).

So, the good news: we’re outperforming most of our D-III peers in this regard. But one needs only look at the attendance at student performances over the last few weeks—Black Anthology sold out and the Lunar New Year Festival drew a big crowd—to see that there’s room for improvement.

It isn’t inconceivable to think that many students on the Danforth campus are here specifically because they are the type who would rather attend a cultural show or theatrical performance than a basketball game. Such is the reality of a Division III, non-state research institution.

And that’s not a problem. But for those in charge of boosting athletic attendance, it’s worth considering why students are at Edison rather than Francis.

There are two reasons that immediately spring to mind: first, that the attendees are supporting their friends, which carries over to sporting events—on my freshman floor alone lived athletes on four separate varsity teams. Second, and more importantly for Whitman and others moving forward, is that the cultural and theater shows provide entertainment, and that’s where Wash. U. sporting events are lacking.

That’s not because the players themselves aren’t entertaining—Wash. U. athletes are incredibly skilled and dedicated to their craft—but rather because for the average student who doesn’t know a three-second violation from a three-point field goal, the game per se isn’t entertaining enough to warrant a two-hour stay at the Athletic Complex.

Here’s where I come in, and here are a list of five ideas on how to attract more Bear supporters to games.

Before one football game in September, more than a hundred students attended a Red Alert tailgate at Francis Field, for which the small price of five meal points bought attendees a main course, two sides and a drink. The attendance that day: 1,652, or nearly 450 more than the average of the other Wash. U. home football games this year.

The tailgate brought in students who had never attended an athletic event before, and reaching out in this manner—particularly to Greek organizations, who primarily show up to men’s basketball games as part of the Phi Delta Theta Bomb Squad—could be a great source of new fans.

There’s no better way to get fans excited about a blowout or invested in an average Friday-night game than to have fans cheer for a fellow student attempting a half-court shot for a prize or watch their peers sprint around Francis Field as part of a between-quarters relay race.

There aren’t TV timeouts or commercial breaks in D-III sports—which is an advantage!—so some of these opportunities might be curtailed. But when even NBA teams are relying on entertainment beyond the athletic sphere, it’s time for Wash. U. to take the hint and adopt some of these fan favorites for itself.

This one can work across sports, and the message should translate easily: grow a local base and make the Athletic Complex seem as special to young St. Louisans as The Big House is to those from Ann Arbor or Cameron Indoor is to those from the Research Triangle.

From the announced creation of a new athletic band to the still-awaited, full-fledged return of Red Alert—last seen at the fall football tailgate—getting students to come out in force to games could be as simple as recruiting clubs.

Here, Wash. U. can borrow from the playbook of Taylor University, a small Christian school in Upland, Ind. Every winter before finals, Taylor hosts “Silent Night,” a basketball tradition in which the entire crowd remains silent until the home team reaches 10 points, at which point the student section explodes into a massive roar and rushes the court in costumes.

Videos of this night go viral every year, but the bigger benefit comes in the box score. Taylor has fewer than 2,000 undergraduate students yet drew 2,658 fans to its Silent Night game this year; for comparison, Taylor’s other home games have averaged just 372 fans.

Silent Night is a young celebration and grew into a campus-wide favorite quickly. Let’s make our own Bear tradition and let it grow until the Field House is full on that one special night each season.

Overall, the game against Emory is the standard toward which Whitman should strive; the atmosphere was truly electric. As senior point guard David Fatoki dropped pull-up three-pointers through the net, the students around me reacted as if they were part of a veritable D-I state-school crowd.

The recipe will be hard to duplicate; that lively crowd required Wash. U.’s biggest rival, a battle of top-six teams, a free Friday night and a popular senior shooting like he had caught fire in “NBA Jam.”

But I refuse to believe that those nights are unattainable across a variety of different sports on a consistent basis. The under-construction Sumers Recreation Center could be a boon to the overall atmosphere of athleticism on campus, and until then, it’s up to Josh Whitman to experiment with a variety of ways to attract fans and make his lasting mark on Bear athletics.