With discussions of diversity and racial equity becoming a part of the broader campus conversation this year, last weekend’s Black Anthology performance hit a bit closer to home.

Attendees watched as students portrayed a theatrical narrative about a group of six black students chosen to put on a demonstration on their campus, a fictionalized school in Baltimore that was modeled off Washington University. The show, co-written by sophomore Andie Berry and senior John Schmidt, also included several dance numbers.

Members of the Black Anthology cast stand with a scene from the Ferguson protests showing on a screen in the background. The cultural performance touched on issues of diversity and racism on a fictionalized college campus similar to Wash. U.

Washington University’s oldest student-run cultural show centered around general struggles with racism on college campuses as well as the various large-scale issues brought to light by the events in Ferguson last semester.

While Black Anthology has served as a celebration of Black History Month and African-American literary artists since its creation in 1989, this year was especially significant in light of the recent Ferguson events, according to Berry. She said that she and Schmidt had written the show’s first draft over the summer before Michael Brown’s death on Aug. 9 forced a rewrite.

“I think…John and I wanted to have the audience respond to was the raw emotion behind it, and we kind of wanted to go back to August to when we were coming back to school and the situation we were coming back into, and put that back on the stage even though it’s now been like [several] months since,” Berry said.

Marcia Hayes-Harris, who founded the show in 1989, noted how much the production has grown since its beginning. 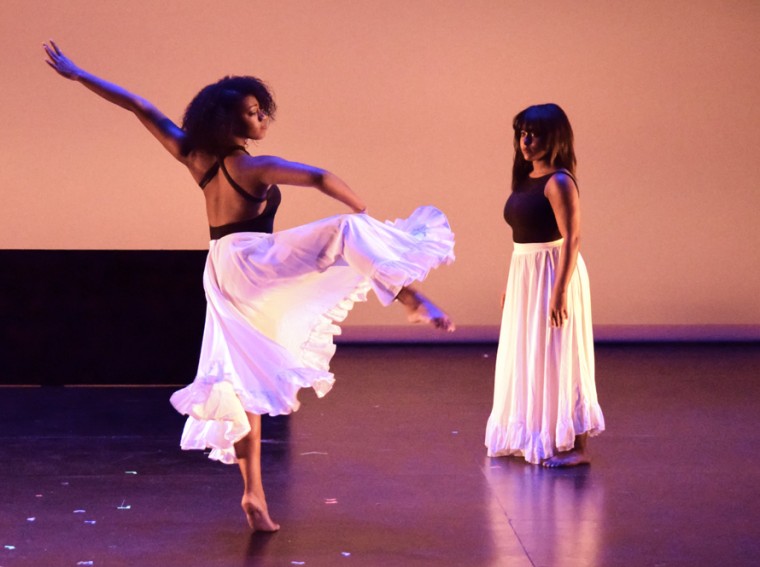 Two dancers perform on stage in Edison Theatre as part of the 2015 Black Anthology production. This year’s Black Anthology had a particularly relevant bent for attending students as it focused on issues of diversity and racism on a fictionalized campus much like Wash. U.’s.

“I’m always amazed at how creative the team is and how much they connect real-life experiences,” Hayes-Harris said. “It’s actually where I wanted it to be, the original vision, but we never made it there while I was here, so they’ve actually taken it and run with it and it just warms my heart.”

Among the administrators in attendance was Chancellor Mark Wrighton, who thought the performance tied in nicely with the “Race and Ethnicity: A Day of Discovery and Dialogue” event happening on Thursday night and Friday.

“I thought it was powerful, very well done,” Wrighton said. “[It was a] great way to wrap up the day after our day and half or so of dialogue and discovery on race and ethnicity; I thought it was good.”

Two-time cast member and sophomore Liv Weiner said that her experience as a performer this year was especially humbling.

“I’m just so proud to look at how the audience really responds to the show in ways that we as actors can’t really predict at first, and it’s just wonderful,” Weiner said. “I’m very happy to do it.”

Freshmen Maya Sorini and Eddie Campell both noted the power of the ending scene, when a cast member read a list of names and dates of black people killed by police in the last 15 years while the lights faded completely to black. 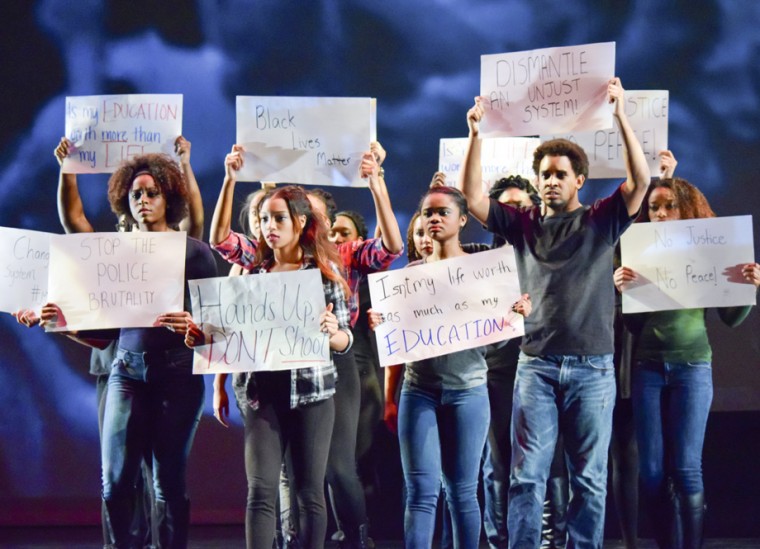 Black Anthology cast members hold up signs relating to the protests that swept the country and the St. Louis area last semester. In the play, the death of fictional Kevin Johnson in Ferguson under circumstances similar to the real-life death of Michael Brown sparked the protest movement.

“I really liked the way the play ended, I thought that was a really powerful jilt at the end, that you don’t get any closure,” Sorini said. “It was really indicative of the message they’re trying to send. I thought it was really well done.”

“The last scene was really a perfect end,” Campell said. “It was how it had to have ended, and I think everyone knew that, but still it didn’t stop me from getting chills down my spine. It was very well done.”

Editor’s note: John Schmidt is a managing editor for Student Life. He was not involved with the writing or editing of this story.