A conversation with Ron Himes, director of Hairspray 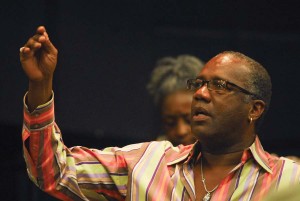 Sporting a newsboy cap and a green pullover, Ron Himes evokes a sense of modesty unexpected of the director of the Wash. U. Performing Arts Department’s production of Hairspray, Broadway’s hugely successful musical sensation, now playing at Edison Theatre.

Asked if theater had always been his passion, Himes laughed and said, “I tried out for my first play second semester of my junior year at Wash. U. I was actually majoring in business. I was thinking about being an accountant!”

Himes landed the lead role in his first play and continued acting until graduation. Noticing the lack of roles available to African-American students, he formed a black student theater group on campus, which has evolved into a full-fledged theater company called the St. Louis Black Repertory. The Black Rep, a St. Louis tradition for 35 years, remains a nonprofit organization and sets out to accomplish an impressive range of challenges. This includes not only choosing plays that can encompass more diverse actors (previous plays have included Ragtime and The Gentleman Caller), but also providing fresh directing perspectives. Hairspray, for example, was set in the time of the Civil Rights Movement to remind the audience of a movement even more momentous than the main storyline. “Because, you know, we didn’t dance ourselves into integration,” says Himes.

The Black Rep also seeks to diversify Wash. U. by building bridges to off-campus communities. For Hairspray, Himes held an open-call casting off campus that led to non-students comprising about one third of the Hairspray cast.

As far as future growth, Himes hopes that his small theater company will develop into an international movement. Currently, the Black Rep holds six plays a season, and guest directors have included artists from Canada and Nigeria.

Don’t think that, with a name like the Black Rep, Ron Himes’ company is neglecting to spread diversity in even broader terms. “The interesting thing is, [for Hairspray] there was only one Asian girl that we actually cast, but later she called and said she couldn’t do it.” Himes said, shaking his head. “I thought to myself, just as with what I’m dealing with is African-American students haven’t been cast because white directors don’t know how to cast them…I’ve got to have her!”

Himes is highly conscious of the imbalance of representation in theater. Considering that Hollywood just recently awarded its first female best-picture winner, the Black Rep is a small but long-needed step towards shattering barriers in theater and reaching out to minorities in general. “That’s a part of what we do and who we are,” Himes said.