Antique telescope offers a view into the galaxy 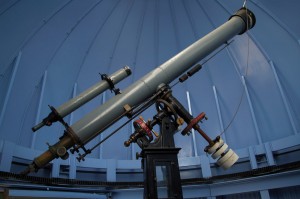 Washington University has housed the Yeatman refractor telescope in 1863. The telescope allows students to see stars and planets from throughout the galaxy, including Mars, Jupiter and Saturn.

The roof of Crow Hall houses a historical artifact that few outside of the Physics Department know about.

Crow Observatory, in addition to containing stacks of stargazing magazines and almanacs, also features a 150-year-old telescope acquired by Washington University in 1863. The observatory and telescope are open to the public on clear weeknights and provide sky-gazers with views of Jupiter, Saturn and many other celestial bodies.

The Yeatman refractor telescope dates back to when the University occupied its original downtown campus. William Greenleaf Eliot, co-founder of Washington University, announced the design for the telescope in 1857, which was funded by St. Louis philanthropist James Yeatman. The telescope was moved in 1905 when the University moved to its current campus, and the first observatory was built where Louderman Hall now stands. In 1954, the telescope was moved once more, this time to the roof of Crow Hall, and it has remained in the Crow Observatory ever since.

While modern telescopes are much more powerful than the Yeatman refractor, the viewing difference is moot in a major metropolitan area. In St. Louis, there is too much light pollution for research or far-off sightings to be done. In order to allow users of the Yeatman refractor better viewing and limit some of the University’s light pollution, the observatory actually contains a switch that turns off a chandelier in the lobby of the Earth and Planetary Sciences Building.

As research using the telescope is impossible, it remains at Wash. U. as an educational tool.

“In science, doing experiments or making observations yourself is the way to learn what scientists do, and seeing pictures in a book just doesn’t work,” said physics professor Patrick Gibbons, who teaches solar system astronomy.

Because of this, the Crow Observatory has an interesting mix of visitors. It mostly attracts physics students who are required to use the telescope for class, as well as some additional, curious students and a few people from the surrounding St. Louis community. Understandably, visitation numbers swell on nights before physics assignments are due.

“[The telescope is] primarily aimed at the Wash. U. community, so there are some students from classes, and some students just wander up there because they’ve heard about it,” said physics professor Martin Israel, who oversees the telescope and the observatory.

“We get some people coming from the [St. Louis] community, usually only when there’s mention of us or some particularly interesting event,” said senior Charles Munson, one of the students who staffs the observatory. “We had a few more people than usual when Mars was at its closet approach to the Earth than it has been for the past 10,000 years.”

The telescope is a refractor telescope, meaning that it uses a lens and an eyepiece to provide a view of the night sky. The Yeatman refractor’s aperture (the diameter of the lens) is six inches, and, depending on the eyepiece used in the telescope, can magnify from 60 to 603 times. This allows students to have some choice regarding which planets and stars they observe.

“It was really cool, I went on a really clear night, and you could see all the stars. I’m totally going again,” sophomore Ariel Bruce said.