In line with Facilities’ plan for replacement 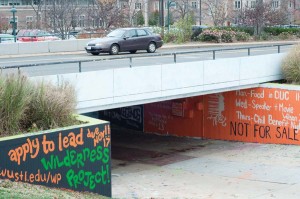 The Underpass connecting main campus to the South 40. A recent report published by the Federal Highway Administration rated the bridge as structurally deficient.

Does not meet current guardrail standards

The iconic South 40 underpass is structurally unstable, according to a recent report released by the Federal Highway Administration.

A structurally deficient bridge is not necessarily at high risk of collapsing, but does require consistent monitoring and inspections at least once a year.

The Federal Highway Administration’s National Bridge Inventory Database says that the bridge “meets minimum tolerable limits to be left in place as is.” While its substructure (base supports) and deck are both in good condition, its superstructure (the section between the supports and the roadway) is not up to current standards, receiving a rating of four out of 10.

The Department of Facilities and Planning is not concerned about the state of the bridge, which it hopes to replace next summer, Project Manager Sarah Stanton said.

“We’re not going to put people in danger when they’re walking from the South 40 to the main campus,” she said. “It is not in any way dangerous, to my knowledge.”

She noted that the need for improvements is not a surprise.

“That bridge was identified as one that had reached toward the end of its lifespan, which happens; it’s sort of the wear and tear of bridges,” Stanton said. “It’s consistent with what we’ve been planning for.”

The underpass was built in 1962, and Facilities added additional supports beneath the roadway in the summer of 2008. Last semester, they began soliciting opinions from students about the current condition of the underpass in order to better prepare for a replacement.

“A four isn’t critical; we have things at the three and they’re not closed—but a three means you need to do work,” said Mark Croarkin, bridge maintenance engineer for the Missouri Department of Transportation. “You can be deficient…but [still] function fine.”

One source of structural deficiency can involve structures that are structurally obsolete—or do not meet the most up-to-date standards. For example, current standards would require that the underpass have guardrails.

Croarkin said he is responsible for inspecting the bridge before Christmas to ensure it is still adequate. The bridge was last inspected in November 2009, according to Transportation for America, a coalition of public and private entities that advocates for an improved national transportation system.

The bridge currently has a sufficiency rating of 39.7 out of 100. Croarkin said that any bridge rated below 50 is entitled to federal funding toward construction of a full replacement.

Students did not voice particular unease with the underpass’ present condition, other than annoyance with the fact that it leaks.

“I don’t really feel unsafe,” freshman Linn Wang said. “I think [they should] fix the problem with leaking water, but I feel generally it’s pretty good.”

“I hope it doesn’t collapse and I don’t like the water drip,” freshman Jon Luskin said.

Sophomore Nicole Applebaum thought that Facilities could definitely improve the current structure by eliminating the leakage problem and reworking the walkway to make the turn safer for bicyclists. But she stressed her hope that the new underpass maintain the feel of the current structure, and for improvements not be taken to extremes.

“If they want to improve the structural quality of it so that they can prevent accidents from occurring in the future, they should go ahead and do it,” Applebaum said. “[But] they shouldn’t change it in a way that would change the feeling of the South 40 or of campus…modernizing and making it cool won’t necessarily make it better.”

Stanton said that the planning process, which involves both the Missouri Department of Transportation and the City of Clayton, is taking many of these student concerns into account.

“I know a lot of people have expressed concerns with the drainage, line of sight, circulation…so all those things we’re trying to incorporate into the design,” she said. “Being able to paint the wall spaces is going to be maintained.”

The construction is slated for this summer to minimize conflicts with campus life.