Senior Drea Gonzalez and sophomore Olivia Williams, who serve as the group’s co-presidents, created the organization to be open to any female-identifying woman of color who is a member of a chapter of Washington University’s Women’s Panhellenic Association. While the organization was conceptualized last fall, the group held its first general body meeting April 1. In addition to two co-presidents, representatives from each sorority serve on the executive board, with the exceptions of sororities Alpha Epsilon Phi and Kappa Delta.

The mission of Sisters of Color (SOC) is to advocate for and increase the visibility of women of color within the Greek community. Sophomore Lizzie Franclemont, chapter representative for Delta Gamma, feels that that group is long overdue in addressing diversity issues in Washington University Greek life.

“I often think that women of color existing in Greek life isn’t talked about. It’s a much different experience than it is for people of color who are in fraternities than it is to be [in] a sorority, and the way that you move through spaces are so different as a woman,” Franclemont said.

After meeting with Assistant Director of Fraternity and Sorority Life Austin Sweeney and several other fraternity and sorority representatives in November 2017 to discuss diversity issues in Greek life, Gonzalez was inspired to create a space for women of color to connect. According to Gonzalez, the group was originally envisioned as a social media chat within Chi Omega specifically. However, a conversation with her roommate led Gonzalez to expand the scope to include other sororities.

“I think they have been really passionate about creating a much-needed and an important affinity space for our sorority community,” Sweeney said. “It was really inspiring to see them take a really good idea and with their leadership abilities operationalize it into something that now is a functioning group.”

To ensure the group’s longevity, Gonzalez sought out an underclassman to collaborate with. Gonzalez—who also serves as the co-president of the Association of Latin American Students (ALAS)—immediately thought of Williams, whom she recognized from an ALAS event hosted during DACA Week. Williams was eager to collaborate with Gonzalez, having noticed diversity issues in her own Greek life experience. After the two connected, Williams immediately gauged interest in forming a space for women of color.

“The first thing I did was I reached out to every [person of color (POC)] in [Chi Omega] and I asked them about the idea. And this was when it was such a rudimentary idea and we hadn’t fleshed it out,” Williams said. “There was a lot of support for it.”

According to Williams, gathering both qualitative and quantitative data formed an important foundation for the group. The two co-presidents created a survey in consultation with the Office of Campus Life and Lambda Q, an organization focused on increased visibility and advocacy for LGBTQIA* students in Greek life, intended to gain insight into the experiences of women of color.

The survey was distributed last December through social media, as well as via email to all Washington University chapters. Gonzalez and Williams heavily publicized the survey with a goal of obtaining at least 50 responses. After remaining open through winter break, the survey was closed prior to spring 2018 recruitment. The survey was restricted to female-identifying women of color who were active members of a sorority at the time of the survey’s release. 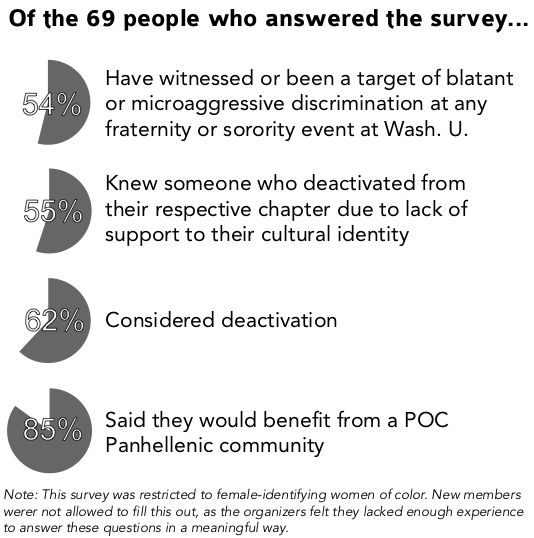 In addition to collecting responses anonymously, the survey was closed to new members, as Gonzalez and Williams felt that new members lacked significant experience in their sororities to provide insightful and accurate feedback. An optional question allowed members to disclose their chapter affiliation. According to Williams, only one individual declined to answer this question. She added that survey respondents represented a wide array of sorority chapters.

In addition to questions related to Greek life experiences, the survey included a link for individuals to express interest in becoming more involved with SOC. Thirty-five individuals indicated interest and the co-presidents selected their executive board from that pool.

Senior Briana Belfiore, chapter representative for Chi Omega, felt the survey was long overdue in assessing the thoughts and feelings of people of color in a predominantly white Greek system. She felt compelled to become more involved with SOC.

“I was thinking, ‘What is another way that I can get involved my last semester that would be really meaningful for me?’ And I think this was one frontier that I hadn’t done as much work as I wanted to in. And I’m really glad that it’s come to fruition and I’m going to be able to be part of the planning stages,” Belfiore said.

Franclemont expressed interest after hearing about SOC from Williams. As Delta Gamma’s director of social awareness, Franclemont sought to engage with SOC in a similar way that allowed her to maintain her chapter position.

“I was trying to put myself in roles where I could really impact change. But at the same time, I felt hypocritical because I was talking to people and trying to educate a predominantly white chapter on this experience, but really had nowhere to direct other women of color. And so I think SOC has been really great in that regard,” Franclemont said.

Both Williams and Gonzalez noted the power of student-led movements to affect change on campus. Gonzalez and Sweeney expressed excitement at the recent emergence of several new affinity spaces for students of color at Washington University.

“I’m excited to see how Wash. U. is going to look next year, given that we now have Sisters of Color, we now have Alpha Psi Lambda, which is the Latinx [co-ed] fraternity and…a Black House,” Gonzalez said. “One of the biggest things that I always heard about at Wash. U. is the lack of diversity. And while next year there will probably still be a lack of diversity, now these spaces exist to try and give the minority percentage a space to advocate for themselves.”

“I think the creation of these groups provide critical visibility for these student populations in our Greek community that haven’t been there in the past. I think it’s critical that our community is always growing to be more inclusive, to be more representative of the student body and to be welcoming of all identities,” Sweeney said.