Newcomers and Familiar Faces: Women’s Soccer Puts Up Solid Showing in two ties and a win 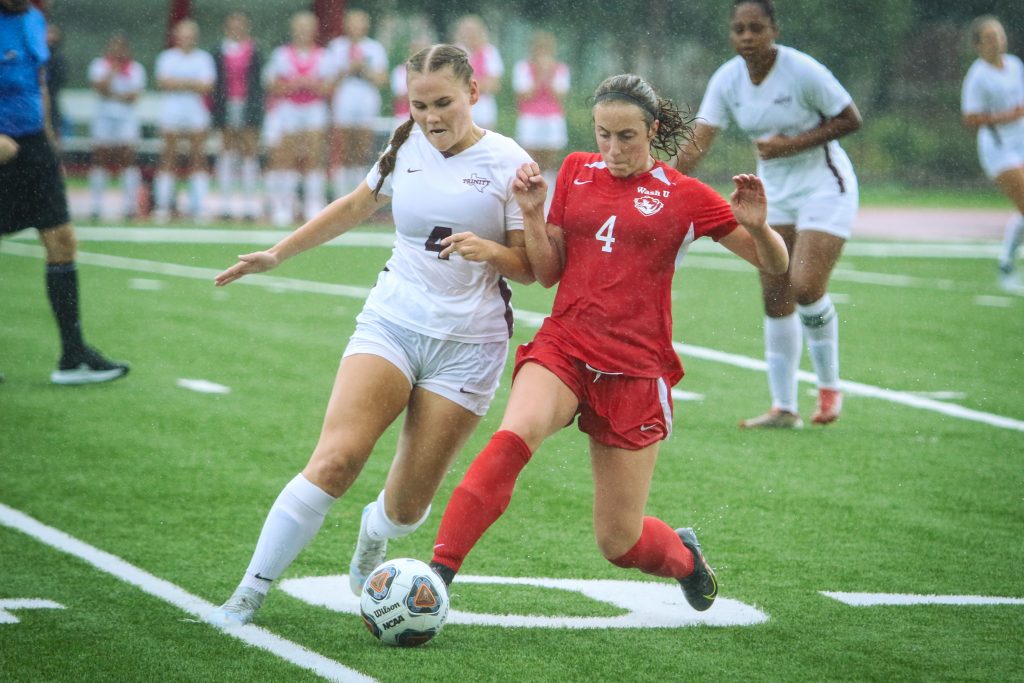 Jessica Greven dribbles down the pitch against Trinity in the pouring rain that opened up in the second half of the game. (Photo by Clara Richards | Student Life)

The women’s soccer team battled for forty-five minutes on the pitch for an even first half this Sunday against No. 16 Trinity. Then, minutes after the team returned to play, it started pouring.

But Jess Greven squeezed out her ponytail and took a shot on goal, a missile to the goalie in the bottom half. The pace of the game picked up, with two shots on goal in two minutes. Water sprayed from the turf with each bounce.

Ultimately, the game finished at 0-0, with the Bears unable to get the ball in the back of the net. Still, after a resounding 2-0 victory versus Greenville on Thursday, the WashU squad remains undefeated. In a season preceded by the return of longtime Coach Jim Conlon, the match provided an opportunity for a largely unproven WashU squad to build chemistry and sort out rotations before Conference Play begins next month. Contributions from the Freshmen will be integral to this year’s team’s success, as the scorers of half of last year’s goals have graduated.

Conlon was impressed by the poise and composure of No. 11 WashU this Saturday. “I’m happy with the shutout,” he said in a WashU Sports Network postgame interview. “If we can shut a team out like that — of that quality and some goofy weather conditions — we’ll take it early in the season.”

Sophomore Gaelen Clayton led the defensive line for the Bears, playing all 90 minutes, while Junior Midfielder Anna Viscovitch clocked in 85, including a scoring opportunity that was deflected by a Trinity defender in the 24th minute. Senior Forward Maggie Brett and Junior Defender Kate Flynn also contributed after coming off the match versus Greenville where both women scored their first career goals.

Coach Conlon raved about both women after the draw. “Kate and [Maggie] are just effortless up and down that outside back and do a great job for us.”

Brett, who is returning from her third ACL injury, has been integral to the WashU squad thus far. When asked about her goal on Thursday, Brett noted that “My teammates were more happy than me… It was a cool feeling to see everyone supporting me in that.”

The weekend’s matches also provided ample opportunity for new freshman recruits to play and get a feel for soccer on the collegiate level. Midfielder Kaci Karl led the team in minutes off the bench, while freshman Marilee Karinshak led WashU’s attack. After a competitive training camp where the Freshman Class was whittled from seventeen recruits to seven roster spots, Karinshak was excited to get on the field for the first time this weekend. “I’ve been looking forward to this for so many years,” said Karinshak. “Seeing the jerseys and being able to put them on was a really overwhelming feeling – and it just feels awesome.” With a lack of forwards, Karinshak and Brett were the two starting forwards in a team heavy on centerbacks.

Other members of the squad have noticed the instant impact from the first year class as well. “We have great freshmen, obviously Marilee and Kacy getting great minutes, [but also] a ton of others,” said Brett.

While the skies opened up around the 67th minute of Saturday’s match, the downpour seemed to have little effect on the morale of the WashU players. As Karinshak noted, “it was interesting conditions, but we fought through and made sure to do what we could do and kept it 0-0.” WashU seemed to gain momentum in the second half, and ultimately led Trinity in shots, shots on goal, and corners, even as they were unable to come out with the win.

Maggie Brett races towards the net: Brett scored the first goal of the season in the team’s opener versus Greenville. (Photo by Clara Richards | Student Life)

Still undefeated, WashU moves on to play unranked Fontbonne University on Monday, as the coaching staff continues to tinker with lineups and rotations. “We’re gonna look at a lot of combinations early in the season to figure out who the best players are that work well together,” said Conlon after the game.