Teeing off: Angelica Harris putts for WU and with George W. Bush

Alone in the hallway just outside her hotel room, seven-year-old Angelica Harris practiced her putting. The year was 2005, and Hurricane Katrina had just slammed into her hometown of New Orleans, devastating the city and surrounding area. Her family and numerous others had evacuated to the hotel, and while Angelica putted, her family stayed in the room, worrying about their home and business.

Twelve years later, Harris, a sophomore on the Washington University women’s golf team, would use the putting she practiced in that hallway on a pitch-perfect green in Orlando, Fla., flanked by award-winning producer Ken Whitney, PGA Commissioner Tim Finchem and the man who her parents may well have watched on TV that night—former President George W. Bush. 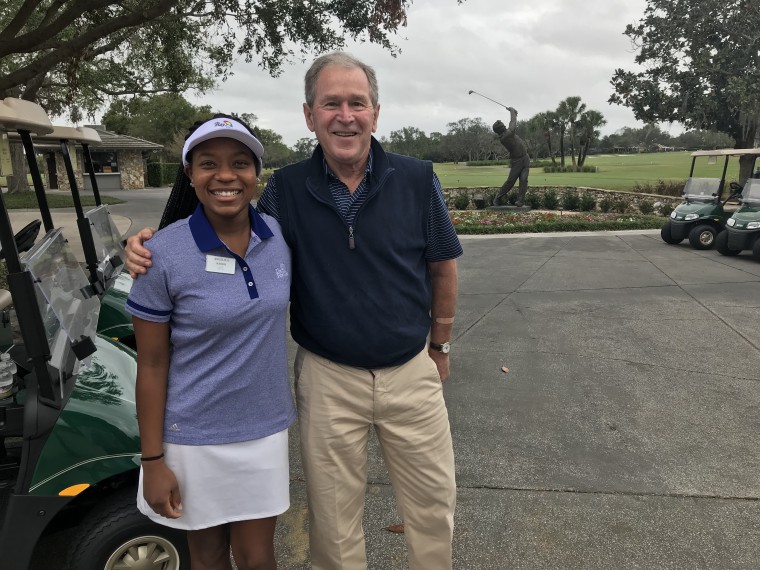 Sophomore golfer Angelica Harris poses with former U.S. President George W. Bush at a golf course in Orlando, Fla., where both of them attended a charity tournament for The First Tee.

Just before Katrina, Angelica had joined The First Tee, an organization which aims to teach children positive values through the game of golf. She stayed in the program all the way through high school, becoming an alumna after graduation. Her participation in the program, combined with a variety of service accomplishments, ultimately allowed her to speak at the organization’s alumni summit and play 18 holes with the former president.

Harris was selected to speak at the summit by an internal committee, which considered her impressive resume—Harris is a John V. Ervin Scholar, has started both a business and a charitable organization and this summer will intern with both the Hong-Kong Shanghai Banking Corporation and Bank of America Merrill Lynch—and her story in their deliberations. According to Harris, one of the members of the committee—Senior Vice President and Chief Development Officer Jennifer Weiler, who she had met at a previous The First Tee event—was particularly helpful in getting her selected.

“She read my college essay, so that’s where she got a chance to see who I really was and see all the other things that I was doing with golf,” Harris said. “I also began an organization called Angelica’s Angels that teaches golf to individuals with autism. She really liked that, so when the committee came together saying, ‘Hey, who should we bring to the trustee meeting and outing?’ and I was a name that came up, she was like, ‘Definitely, because this girl is at Wash. U., she’s on the golf team and she started an organization.’”

In her speech, Harris told the listeners how The First Tee has impacted her life, as well as how she used the lessons she learned in the organization to give back.

“Hurricane Katrina hit when I was seven years old, so that greatly impacted my life. That’s where I began with my speech—my family lost a lot, and The First Tee was there for me. They had mentors and it was a great kind of safe space for me,” Harris said. “I continued to play golf, I had supportive golf coaches and I picked up a few life lessons that I learned along the way. One was positivity for the city of New Orleans and the other surrounding areas, despite the great losses.”

“I talked about that for The First Tee, one of the big things is giving back, so I talked about how I was a golf coach in The First Tee, a mentor to young people and I began my own business called Prep With the Best [which helps youth prepare for standardized college admissions tests]. I also talked a little bit more about Angelica’s Angels in my speech too.”

Originally, Harris thought her speech would be the highlight of her weekend. In Orlando, however, she got a welcome surprise.

“On that Friday, [Weiler] walked up to me and said, ‘Hey, you’re playing with President Bush on Sunday,’” Harris said. “That’s when I found out. And I was like, ‘Wait, what?’”

Once they were on the course though, Harris’s awe at her companions quickly faded away, as they seemed to have just as much to ask her as she had to ask them.

“When we got to the golf course and [Bush] was there, he was like, ‘Oh hey, Angelica! How are you liking Wash. U.?’ So he knew like my whole background before I even told him. He knew I was a Wash. U. student, from New Orleans and more,” Harris said. “It was the coolest round I’ve ever played. It was amazing.”

The conversation on the course touched on a variety of topics, from Bush’s painting hobby to his responsibilities as a father.

“He talked a little bit about his presidency—things he liked, things he didn’t like. A little bit about the media,” Harris said. “He had two political debates that were held at Wash. U., so he talked about how he prepared to answer the questions, his preparation leading up to it. It was about a month of preparation that he would prepare for a presidential debate. I asked him what he would do if he didn’t know the answer and he said he would just answer a different question.”

“I can tell he’s a person who just does what’s true, stays true to himself,” she said. “He even tried to stay like that throughout his presidency. He worked out every day, and he said he read the Bible daily.”

According to Harris, Bush quickly stopped seeming like the famous face from TV.

“It was very informal. It was like, I didn’t feel like I was playing with a former president. There were obviously secret service carts following us, and I saw some secret service people on the streets and driving, but it was still somehow extremely informal. He would ask me, ‘Hey Angelica, can I use your putter to putt this in the hole?’ and he would literally just take my putter and use it. I remember during the cocktail dinner, someone asks him to sign something and he calls me ‘Angel.’ He goes, ‘Hey Angel can you hold my drink?’ And I was holding his drink. He’s very, like, a people’s person. It was so informal. Just a normal guy,” she said.

While Bush was chatty throughout, Finchem was less talkative, according to Harris.

“He was really cool, but he was a bit more quiet,” Harris said. “He wasn’t having the best golf day. He was really, really bad; he was playing awfully. He had some hooks and some pulls, so he wasn’t really in the mood to be talking.”

According to Harris, Bush, meanwhile, was a very good golfer, although there was one particularly distinctive aspect of his game.

“He’s a fast golfer,” Harris said. “He doesn’t take a practice swing, and we finished our round in I think three and a half hours, it was really fast. For a foursome that’s really fast.”

Despite the informality of the event, however, one topic stayed firmly off the table.

“We kind of stayed away from politics,” Harris said. “I didn’t ask too many political questions, and he didn’t answer a ton of them.”

For Harris, the round represented just one more opportunity given to her by the game of golf.

“Golf means building connections,” she said. “It’s a lifelong sport and that’s what I love. I just love all the life lessons that I’ve been learning through it. The nine core values of First Tee. Confidence, respect, responsibility, and more. I think it’s one of the greatest sports, because I don’t think there’s any other sport that would have allowed me to play with and talk to a former president for hours.”