Women’s soccer stunned: With a single stop, the season was over

After 110 minutes of grueling soccer, of falls to the ground and near-head-to-head collisions, the shadows had lengthened enough that half of Francis Olympic Field was shrouded in darkness. Fans streamed down to the front of the stands, clamoring eagerly for a better view of the penalty kicks that awaited.

The No. 3 Washington University women’s soccer team had played to a double overtime stalemate against No. 8 Pomona-Pitzer Colleges on Sunday, with neither team scoring a single goal. The first nine penalty kicks all went in, sliding into the net past various iterations of dives and jumps from the goalkeeper. When sophomore back Gabbie Cesarone stepped up for the 10th shot, the Bears needed a goal to force a second set of penalty kicks and keep their hopes of advancing to the Final Four alive.

Cesarone calmly measured her steps as she moved away from the ball before running up to it and sending a hard line drive to the right of Pomona-Pitzer keeper Isa Berardo. Berardo moved with the kick, seemingly pulled on a string to their right before deflecting the ball away. Wash. U. had lost in the Elite Eight, stunned by penalty kicks, 5-4, in front of a home crowd. 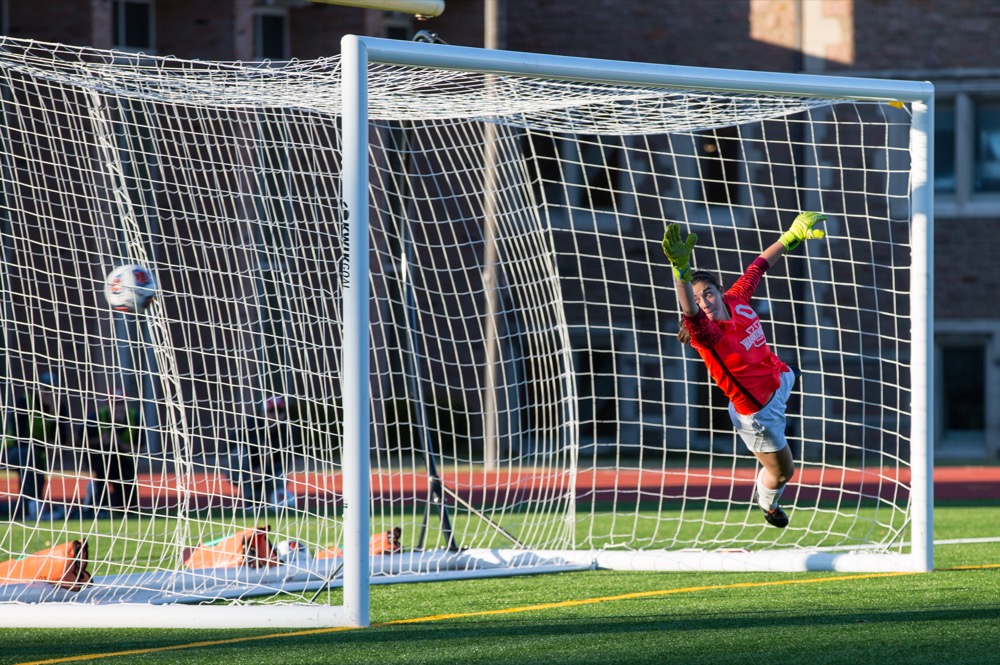 Junior goalkeeper Emma Greenfield dives in an attempt to keep the Pomona-Pitzer Sagehens’ fourth penalty kick from finding the back of the net. The Bears lost in penalty kicks, 5-4, as the Sagehens eleminated them from the NCAA championship tournament. Washington University finished the season 18-1-3.

“It was a great battle, a heck of a fight with Pomona,” head coach Jim Conlon said as he held back tears. “The ball just didn’t bounce our way today.”

The loss to Pomona-Pitzer ended an impressive NCAA tournament run for the Bears. They dominated their two opponents last weekend, outscoring Maryville College and Adrian College by a combined 6-0, and won in overtime against Claremont-Mudd-Scripps Colleges on Saturday, 2-1.

After a back-and-forth first half against CMS that featured only seven shots and three corner kicks, the Bears fell behind in the 61st minute. Junior goalkeeper Emma Greenfield could not stop CMS on a fast break as the Athenas’ Katrina Ostrom slipped the ball into the far corner from the right side.

Wash. U., which has trailed for only brief stretches this season, answered nearly immediately. Less than three minutes later, a corner kick from junior Kristen Reikersdorfer set up junior Katy Mockett to send a cross into the box, where Cesarone made a strong cut in, heading the ball into the back of the net.

“Well, Claremont scored a great goal and we just tried to settle our players down and asked them to do what they do. They responded,” Conlon said about the Bears’ swift response. “I’m glad we were able to execute in those situations today.”

Senior captain Taylor Cohen said that the goal was key for the Bears. “Definitely the momentum after Cesarone came out of our center back to be able to put that header goal in really got us going,” she said. “We talk about ‘next five,’ the next five minutes after you score a goal—that was really important to just keeping that momentum flowing.”

With the game tied at one in the 88th minute, the Bears had a chance to lock it up in regulation when junior Ellie DeConinck secured a cross from sophomore Erin Flynn and sent a shot flying in from the right side. The ball ricocheted off the post, eliciting groans from the crowd.

The Bears put the final touch on the game in overtime, however. Again, Reikersdorfer lined up a corner kick, sending it arcing toward a crowd in the box. Cohen was waiting for it, sliding through traffic to head the ball past the keeper for the win. “It was a perfect ball-in on the corner kick,” she said. “We haven’t scored a ton of goals on corner kicks this year so to be able to get two today was awesome.” The goal was the 48th of Cohen’s career. It was also her 18th game-winner, tying a school record.

Neither Wash. U. nor Pomona-Pitzer could manufacture much of an offense on Sunday, with the Bears mustering just six shots on goal to the Sagehens’ five. Still, each team had its opportunities. A cross intended for Flynn in the 22nd minute went untouched as a Sagehen defender pushed Flynn to the ground, causing her to whiff on a header attempt. The Wash. U. crowd was incredulous at the no-call from the referee, who rankled both sides before he came out of the game midway through the second half, possibly due to illness. 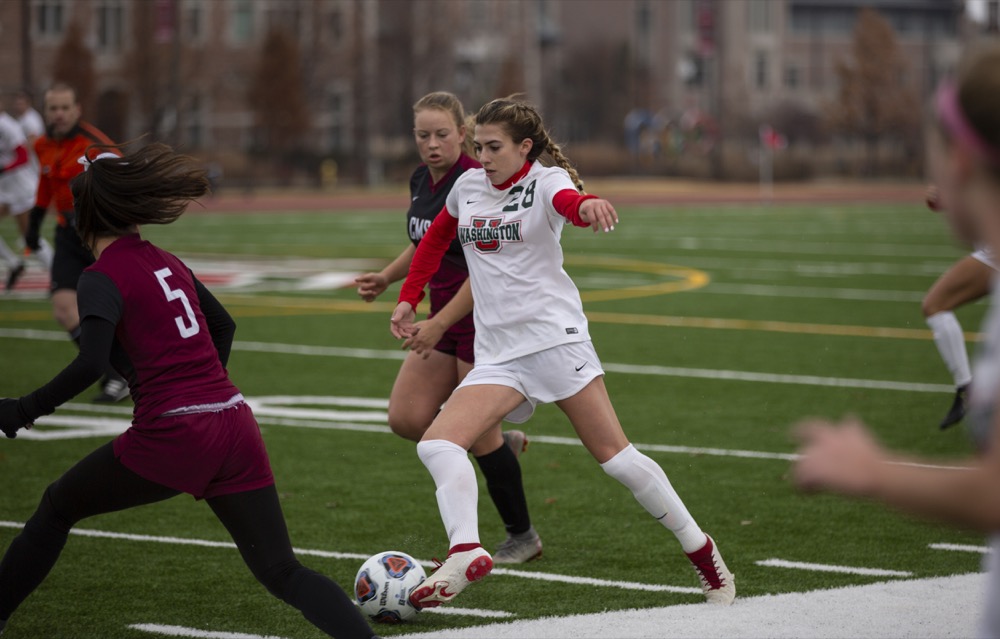 Senior Taylor Cohen moves past the Claremont-Mudd-Scripps defense in the Sweet 16 round of the NCAA tournament on Saturday. Cohen scored the game winner in overtime on Saturday.

Minutes later, Greenfield made two saves in the span of a minute. First, she deflected a shot upwards with the palms of her hands, forcing it to hit the crossbar and bounce up over the net. Then, after a Sagehens’ corner kick, she blocked a hard shot right at her, sending it back into the crowd before the Wash. U. defense cleared it.

The Bears came their closest when Greenfield came far out of the box with only seconds remaining in regulation to send a free kick flying toward the Pomona-Pitzer goal. DeConinck collected the ball and sent it flying toward the goal, but Berardo reacted quickly and secured the ball at their hip, sending the game to overtime.

Greenfield had another clutch save with six minutes to play in the first overtime period, leaping to fist away a slicing corner kick.

Wash. U. mounted a barrage of four shots in the game’s final six minutes, but the Sagehens’ defense stayed strong, forcing two shots wide and one high. Berardo had six saves on the day, while Greenfield had five.

Cohen, junior Ellie Moreland and sophomores Flynn and Ariana Miles all converted their penalty kicks attempts, but the Sagehens made all five of their shots to advance to the Final Four. The Bears finished the season 18-1-3.

“We’re thankful. This group of women has been absolutely amazing,” Conlon said Sunday. “We’re appreciative of the women and everything they’ve given our program.”