Athlete of the Week: Justin Hardy reflects on a year of basketball and another one heating up

Sophomore forward Justin Hardy helped lead the men’s basketball team to a second-place finish in the University Athletic Association last season. Averaging 14.6 points per game and shooting .549 from the field, Hardy was named to the DIII News All-Freshman team and won the UAA Rookie of the Year award. In the lead-up to the No. 7 Bears’ Wednesday night exhibition match against Division I Missouri State (the Bears lost, 76-59), Hardy and I sat down to reflect on his experiences with Wash. U. basketball and his expectations of what is to come. 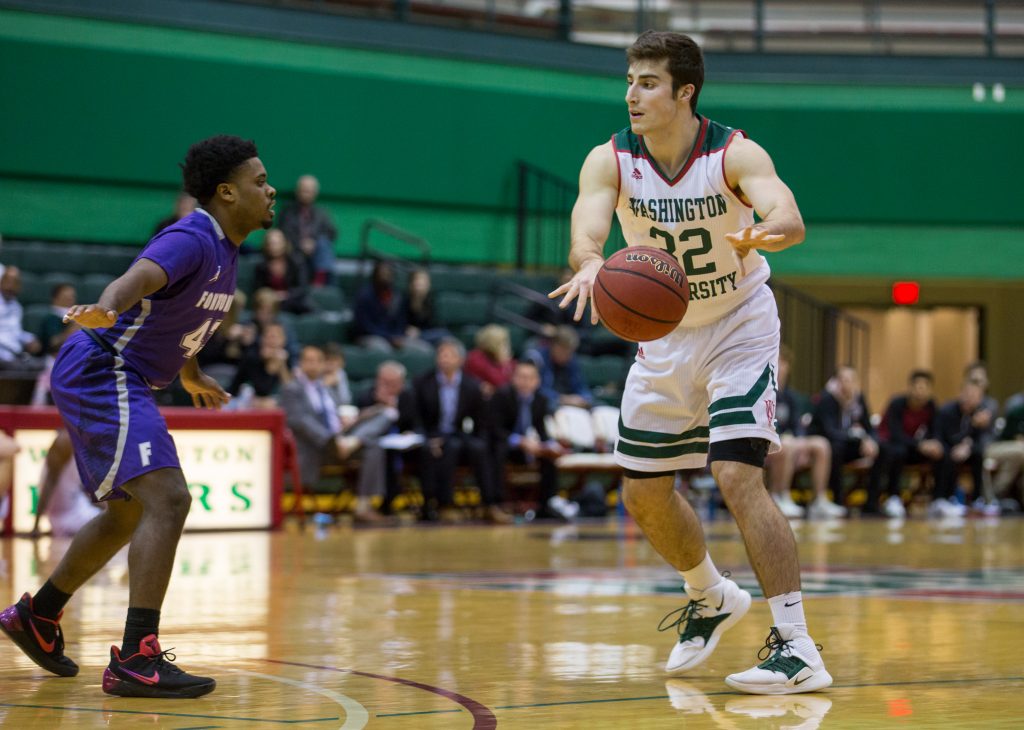 Sophomore, then-freshman, Justin Hardy handles the ball while facing a Fontbonne University defender last December. Hardy was second on the team with 14.6 points per game.

Student Life: What was it like to start all 25 games last year as a freshman?

Justin Hardy: It was a learning experience. Obviously, I had played a ton in high school and I understood that I had the capabilities of being a good basketball player here, but I definitely didn’t expect to step in right away and the level of impact that was expected from me. Just coming in, we were a brand new team with a brand new coach. None of our guys had played a ton of minutes except for Jack Nolan last year and we were all kind of going through the experience of being a freshman together. Coach [Pat] Juckem—it was his first year, so no one had any upper hand on what the plays were or the system that we wanted to run. So, at some point I was kind of at an equal opportunity as anyone else out there. So, you know, [for] the freshmen, it was no excuse for not being ready to go. And I just got thrown into a good position where I was the beneficiary of Jack [Nolan] and Matt [Nester], and they opened up a lot of doors for me and helped me get put in the right spots right away, and they kind of did everything for me at the beginning of the year just to get me in that spot.

SL: Gotcha. What made you choose Wash. U?

JH: I think it was the school over the athletics. Obviously, they have a great basketball program and a great history here with two national championships. The year before I got here, they went 24-4 and were the number 1 team in the country for a really long time. But just knowing that I could excel in that area on the court as well as having a great education, it all just kinda fell into fruition together.

SL: I watched one of the video interviews that you did last year and one thing that stood out to me was how you talked with such passion about dunking. Do you remember your first dunk, whether that’s just like ever or with Wash. U.? What did that feel like?

JH: Yeah, my very first dunk was in warm-ups in a middle school game. There was nobody in the gym and I turn around and look at the person behind me in lay-up lines and I said, “I’m about to dunk this one, watch this.” And I went up and I, you know, I tried it a hundred times before and never gotten it clean. I went up right away and dunked it. One of my buddies ran over to my mom when she walked into the gym to watch the game and he goes “Justin just dunked!” It was a pretty crazy experience. There are not a lot of eighth graders out there dunking. Obviously it wasn’t in a game, but it was still pretty cool.

SL: How tall were you back then?

SL: You mentioned that memory of dunking from middle school. Do you have any favorite memories from last year or from the two weeks of practice that you’ve had so far this year on the basketball team?

JH: We had a fun trip to New York and Boston last year. I kind of think it was a turning point for our team. We really came together that weekend. We played in New York on Friday night and went to a nice team dinner [the night before]. We just bonded really well that night and then played really well the next day against NYU, blew them out by 20. And then Sunday morning we come around and we’re playing in Boston. And Brandeis was a tough team. It was a game that maybe we came into and thought we were going to win easily and we would face a little adversity early. We were down big but then Nester and DeVaughn Rucker sparked the big comeback for us that day. We were just able to gut out a really tough win on the road. And then the best part about the whole trip was that we actually ended up getting snowed in that night. We were supposed to fly back, but we spent two extra days [in] Boston just team bonding. Just being in a hotel and watching the AFC championship together, unable to come back to St. Louis—that just was a great experience for all of us.

SL: You wear number 32. Is there any special story behind that?

JH: The first number that I fell in love with was 10, but then I got put on a team with kids that had already been on that team for forever and someone else was number 10—happened to be my best friend. I went with [the number of] someone who I think is one of the greatest basketball players in history and went to my favorite school—Michigan State, since I used to live in East Lansing—Magic Johnson, who wore 33 in college, but 32 in the pros. I went with his professional number, just as a tribute to his career being a Michigan State Spartan.

SL: Who are some basketball players who have inspired you and how so?

JH: Yeah, Draymond [Green] is definitely the guy I kind of modeled my game around. He’s tough [as] nails. He kinda came into a team that was pretty good. They had established vets with [Stephen] Curry and [Klay] Thompson that were getting going, and they were starting to become winners, and Draymond came in right away, fresh out of college and didn’t really care about being a rookie, being a second-year guy. He came in and showed his leadership right away, and I think that’s applicable in all facets of life. You know, he wasn’t the star player, but he wasn’t afraid to let his voice be heard and do the right things along the way.

SL: How has Draymond’s game inspired you on the court?

JH: I don’t think he does anything particularly well, but he’ll defend any position on the floor and he does the things it takes to win. He takes charges and is going to block out and rebound every time—he’s going to run the floor hard. And I think that’s kind of where I fit in on this team. I’m not the greatest shooter, I don’t do anything particularly well. But if I can do all the little things, they can put me on the floor and it will make a big impact for us.

JH: I think it’s a mindset. It’s a mentality for sure. Just every day, thinking that when I step on the floor, I’m gonna to do everything I can to make this team better. I don’t have to have the glamour or the glory of hitting big shots or crossing someone up and making them fall to the floor. But [it’s] just the mentality that I will do everything it takes to make sure I put my team in a position to win and I want to bring others along with me on that path too.

SL: What are you most excited for this season?

JH: I think [our exhibition at] Missouri State. It’s going to be an experience of playing in a big stadium with a lot of people there against some really talented players. But I also know that our team is really hungry to get down and play Emory because they took it to us twice last year and it didn’t settle well with us. We talk about it every day in practice, how we want to come out ready to play.

SL: The game against Missouri State seems like it’ll be a lot of fun—good luck! My last question now: You were the UAA Rookie of the Year last year—that must be pretty dope. What was that like?

JH: It was pretty cool. I don’t play the game for awards. It’s nice that I get some personal recognition, but none of that comes if we aren’t a good team. All these awards come when your team wins, [then] some good players from those teams get recognized for it. So as cool as it was to be Rookie of the Year, we have a lot higher goals than just get[ting] some personal achievements or scoring points, right? Like we’re coming out. We want to be really good, put some Ws on the board and then, when our team ends up in the Final Four or national championship, [or] wins it all this year, those personal accolades will come and we’ll all feel good about the people winning them.

This interview was edited for length and clarity.