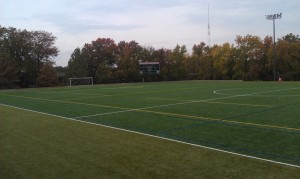 With plans for a renovated Athletic Complex still in the design phase, club sports teams have been breaking in a revamped South Campus athletic field.

Washington University purchased the property just more than a mile from the Danforth Campus in 2007 and opened it for play the next year, but the grass field would quickly wear down due to rain and overuse, according to Andrew Koch, the Athletic Department’s facility manager.

“On a natural grass surface, it just got beat up really badly very quickly,” Koch said.

Synthetic turf from the company UBU Sports was installed alongside a scoreboard with built-in functions for all the sports that will now use the field, which include lacrosse, Ultimate Frisbee, soccer and rugby. Moreover, three teams at a time are able to practice now that added turf space has replaced a track. The field re-opened for play in September.

“The quality is a hundred times better because the grass field was just really bumpy—it wasn’t flat, and there were patches of dirt,” junior Anat Gross, president of the women’s Ultimate Frisbee team, said. “It made it easier for people to get injured.”

Gross added that the new field allows teams to practice even if there is rain or other unfavorable weather.

“We’ve got tons of kids that want to participate [in club sports], and we just weren’t giving them the facility that they could be proud of and actually use to its fullest potential,” Koch said.

Card access is now required for entrance to the facility, but it will remain open to the public in hours that club teams are not practicing or competing.

Meanwhile, plans for renovation of the AC are inching forward, with the beginning of construction still set for after commencement in May.

“It’s really coming together—it’s looking really good,” Koch said. “It’s not there yet—I think the architects will admit that. I think anyone involved in the project will admit that, but it’s getting there.”

The new AC will include a fitness center approximately double the combined size of the current weight room and McWilliams Fitness Center, improved hardwood for the recreational basketball gym, and an elevated track. The facility will also have windows and be more evened out, since Koch said the current AC has 10 levels despite only four stories. Based on recently implemented standards for all new buildings, it will include gender-neutral restrooms.

The renovated AC is scheduled to open after the fall semester of 2015.