Washington University’s 3.6-percent tuition increase from the last academic year to this one was the lowest in 60 years, Barb Feiner, vice chancellor of finance and chief financial officer, said at Monday night’s Tuition Forum.

Feiner, along with Chancellor Mark Wrighton, Provost Holden Thorp, Vice Chancellor of Admissions John Berg and Director of Student Financial Services Mike Runiewicz, spoke in the Goldberg Lounge to discuss the University’s tuition data and spending practices and to compare them to those of other universities. 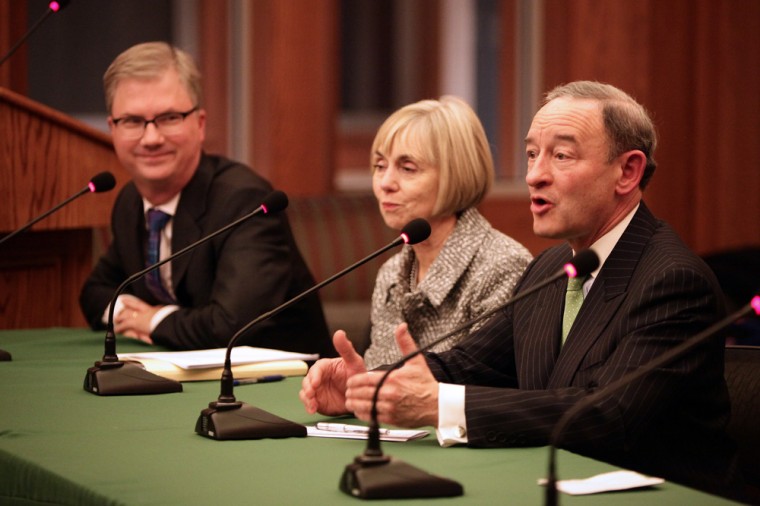 Chancellor Mark Wrighton speaks at this year’s Tuition Forum, sponsored by Student Union Senate and held in the Goldberg Formal Lounge. Wrighton discussed the impact of the current Leading Together fundraising campaign on financial aid awards for University students.

During the forum, sponsored by Student Union Senate, Feiner compared the University to peer institutions, noting that it has a slightly higher overall tuition and lower coverage of attendance costs by financial aid awards than its peers.

Feiner cited data from the Consortium on Financing Higher Education, a group of colleges and universities that “are committed to meeting the full demonstrated financial need of admitted students,” according to the Consortium’s website. However, the data schools submit to the Consortium is only available to high-level administrators at member schools.

This year’s tuition of $45,700 is slightly higher than the 25 colleges that have the most overlapping applications with the University, according to Feiner. After years of tuition increases that were well above the rate of inflation, she said the rate of increase was gradually decreasing and becoming more manageable for students.

However, slower growth in tuition has not necessarily made the University more accessible for students from low-income backgrounds.

“Our financial aid awards are not as generous as many of our peers’,” Feiner said. Students with need-based aid, on average, had 81 percent of their tuition covered by a combination of University and outside grants. Other COFHE schools had 91 percent of tuition covered on average, with some schools covering both full tuition and partial room and board for a total of more than 100 percent.

According to Feiner, University students who qualify for need-based aid are currently paying 10 percent less of the total attendance cost than they were in 2008. These students on average are paying 45 percent of the full-attendance price.

Feiner also noted that there is a $6 million deficit in the total undergraduate and graduate spending for the four schools with undergraduate programs. However, she said the increased size of this year’s freshman class and additional cost-cutting will lower this difference to around $3 million by the time the year is over.

Runiewicz maintained that Student Financial Services is working to ensure that students are able to afford to enroll in the University and graduate within four years.

“We never want a family’s changed financial situation to impact a student’s ability to stay at Washington University,” Runiewicz said.

Other topics the five administrators discussed ranged from spending on admissions to the school’s endowment. Additionally, the panel discussed the costs incurred by the plan to grow the University.

“A driver in thinking of further expansion on the side of becoming bigger is we can make this experience available to more students,” Wrighton said. “That’s a positive. But if we erode quality, maybe not such a good idea.”

Wrighton also discussed the financial aid impact of the current Leading Together fundraising campaign. Of the amount already raised, $276 million is going to financial aid for undergraduate and graduate students in the four schools with undergraduate programs.

“We’re trying to, in effect, rebalance the deployment of capital from physical facilities to support for students in other areas,“ Wrighton said. “Our zeal for improvement is going to have to be supported by other means, and that’s why we are in the midst of an effort to build philanthropic support.”

Thorp said that the University hired an external consultant to find ways the University could cut expenses while impacting students as little as possible.

After a month and a half of planning the event, Senate Speaker and junior Tommy Nathan was pleased with its outcome.

“I think the panelists did a great job, and I think everyone who was there learned a good amount about the school and tuition in general,” Nathan said. “I think it went well.”

He was also noted that the panelists were very conscious of and open about the University’s financial policies, for which it has faced criticism.

“I thought it was really cool how transparent the panel was. The people on the panel were very aware of some of the things Wash. U. could do better in terms of tuition and aid,” Nathan said. “We always hear about Wash. U.’s tuition being super high and our aid levels not being good compare to other schools, but I think the panelists made it really clear that as a school, we’re trying to improve in that, and not just that we’re trying to improve in that, but there are certain limitations in that.”

Sophomore Evan Walker noticed how in-touch the panelists were with student financial issues.

“[The administrators] seem pretty honest and aware of some the struggles students have,” Walker said. “I think anyone is going to say it’s really expensive, but I also think they provide a lot of support and financial aid.”

Sophomore Blake Robertson, who attended the event, was intrigued by the University’s use of his tuition.

“I was curious to see the admins’ perspective on tuition and where all of that goes, and I wanted to see where my money ended up,” Robertson said.

He was also interested in the details of the University’s money intake.