According to reports, a man and a woman were shot on the platform. Both victims were conscious and breathing when police and paramedics arrived on the scene. 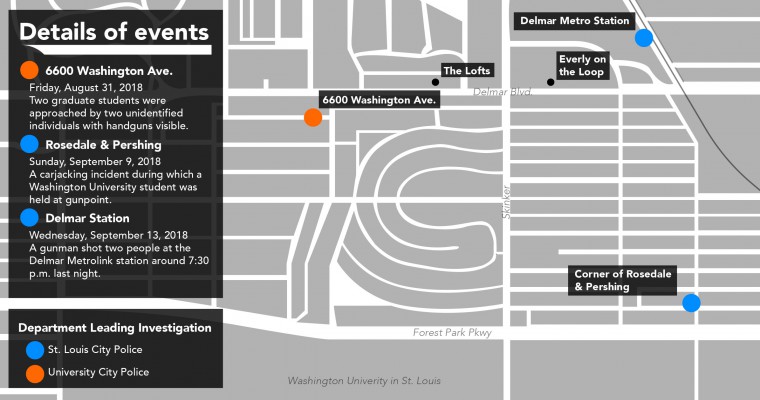 Junior Geordan Neinstein, who lives in Everly on the Loop, heard gunshots go off and saw people sprinting from the station from his window.

“I was just sitting on my couch; and all of a sudden, I heard gunshots. And I looked up out the window, and people were running,” Neinstein said. “At first, I thought they were coming from inside one of the buildings, but then I realized people were running from the Metro platform screaming…Then a helicopter flew in and then a bunch of police cruisers.”

According to Director of Public Relations at the MetroLink St. Louis Patti Berk, the Delmar Loop Transit Center was not served by the MetroBus or MetroLink until further notice per request of law enforcement. It resumed service around 9:40 p.m.

Washington University Chief of Police Mark Glenn explained the reasoning behind an alert not being sent to the University community.

“In this case, an alert was not issued because the suspect was in custody within a few minutes of shots being fired and the situation was resolved,” Glenn wrote in an email to Student Life. “We [sent] an informational bulletin to make sure that students are aware of the incident. This is consistent with our protocols. Our Residential Life staff is available for students living in the area of the incident who may need support.”

Junior Harry Arndt, who also lives in Everly but wasn’t home at the time of the shooting, expressed concerns over not being notified of the threat by the University.

“I feel really frustrated about not getting a notification from Wash. U. Just because it’s not on campus doesn’t mean it’s not important to students’ safety,” Arndt said. “A large number of the junior class lives on the Loop. The past few days’ events definitely make me feel less comfortable staying off-campus.”

Junior AJ Dunham, who also lives in Everly and wasn’t at home when the incident occurred, finds the incident unsettling.

“I’ve been on campus most of the night. I have not heard anything [from the University],” Dunham said. “Obviously, it’s terrifying to have that happen so close to home. This is just kind of extremely unfortunate…that’s my backyard. I know a ton of people that live in Everly park in that parking lot.”