The St. Louis launch of Bike Share, a joint venture between bike-sharing companies Ofo and Limebike, is expected to come to Washington University’s campus, the University announced April 16.

The idea for a Bike Share program in St. Louis began to take shape in 2014 when the Great Rivers Greenway completed their Bike Share feasibility study and business plan, followed by the creation of a Bike Share Working Group led by Bi-State Development. Washington University was among the key institutions and organizations to help in the research and discussions that revolved around bringing a Bike Share program to St. Louis. 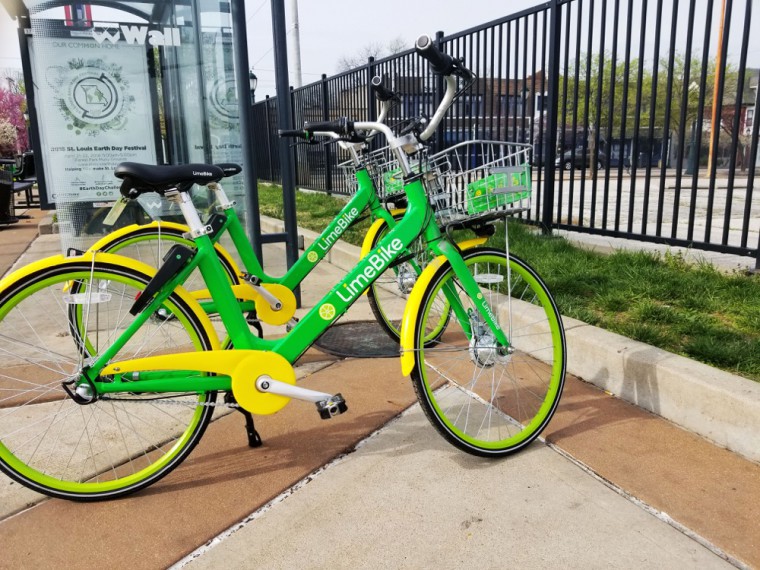 Two of the Limebike dockless bikes, part of a program introduced by Ofo and Limebike. The Limebike program is already in action throuhgout St. Louis and is planned to begin soon on Washington University’s campus as well.

Assistant Vice Chancellor for Sustainability Phil Valko believes that one reason the program was not able to launch in 2014 was that many of the bike-sharing businesses were using docked systems, which posed a financial problem.

“The big challenge with Bike Share in a lot of U.S. cities is that the docked systems…[are] quite infrastructure-intensive, and they’re pretty expensive to get up and running,” Valko said. “About a year ago, Bi-State began to provide leadership from getting folks to reinvigorate the exploration of Bike Share. And this was happening at the same time that the dockless systems were just starting to roll out.”

According to Washington University’s Office of Sustainability website, “Instead of having to pick up a bike from a designated location, one can find dockless bikes through GPS locators on a smartphone app or by calling a phone number. At the end of the ride, dockless bikes lock to themselves by clamping the back wheel, allowing wide availability throughout the city.”

According to Valko, the dockless bikes do not require upfront capital from the city nor dedicated infrastructure

“It seems to be meeting a really strong demand from residents in the region to have this element of the sharing accountability come to St. Louis,” Valko said.

Currently, renting a dockless bike in St. Louis costs $1 for 30 minutes with LimeBike and $1 for an hour with Ofo. A 50 percent discount is offered for those who have a “.edu” email.

Valko does not expect it to take long for the University to approve the Bike Share program on campus.

“Since Bike Share is already in St. Louis and operating, the University recognizes that there’s a timeliness to move forward quickly,” Valko said.

Senior and co-owner of Bears Bikes Ethan Ruder believes that the program will be a success.

“We think that this pilot program that the school is hoping to start soon will make the campus even more friendly than it already is; and since St. Louis is going through the first program with LimeBike and Ofo, it makes perfect sense for Wash. U. to be involved. We’ve already seen a couple of bikes come on campus, and it seems like it’s doing its job already,” Ruder said. “We think it’s an unbelievable opportunity for campus to be more involved with sustainability.”

Ruder does not think that the program will stop people from buying or owning bikes and sees the dockless bikes as more useful for those visiting campus or needing to borrow a bike for the day.

“It’s not going to be for your everyday student…but for a random Saturday for someone who wants to go to Forest Park, you can find a bike to use; and so, we think that that’s awesome,” Ruder said.

Ruder does not expect the startup of Bike Share on the University campus to negatively affect their business in any way.

“It might affect our short-term rentals where we rent for a day, but that doesn’t impact our business at all,” Ruder said.

Valko believes that the addition of the Bike Share program to Washington University’s campus will not only make bikes more accessible for students but also offer a more sustainable and earth-friendly transportation option.

“We’re excited that BikeShare has finally come to St. Louis, and we think it will make a great addition to the alternative transportation landscape of the campus,” Valko said.