Dismissed as vaporware for years, “Black Mesa,” the remake of the acclaimed “Half-Life,” has finally been released. Following the 2004 release of “Half-Life 2” and “Half-Life: Source,” “Black Mesa” was announced that September as a conversion of the original game using Source, the new game engine created by game developer Valve. The gaming world has anticipated “Black Mesa” for years and then some. Put simply, nothing is ever worth that long of a wait. However, now that we have “Black Mesa,” the eight years are almost forgotten, and we can resume our role as character Gordon Freeman in a novel and enticing way.

“Black Mesa” is a largely faithful remake, but the liberties that it takes almost exclusively render the game better. The game looks beautiful. The textures are well done, and though they aren’t the best they could be, they are a tremendous step up from “Half-Life: Source.” Many building layouts have been changed, resulting in a novel experience for even the most seasoned veterans. The game runs very smoothly even on the highest settings. Some visual changes rival or even surpass those seen in “Half-Life 2: Episode 2” or the more recent “Portal 2.” When Gordon is sprayed with acid by a bullsquid, his gloves are speckled with the neon green toxin. The depths of the Black Mesa Research Facility are immersed in minutiae, such as posters that share the same sense of humor as Valve’s developers.

“Black Mesa” also introduces some new puzzles. While hardly innovative, they help to create a refreshing experience. For example, several puzzles in “Half-Life,” “Half-Life 2” and “Black Mesa” involve finding a valve, turning it and running to see what happened. Black Mesa may not change the valve turning scheme, but it does provide a new framework in which to do so. Some puzzles remain: fans of the series may recall jumping from crate to crate over a bottomless pit in the chapter “Unforeseen Consequences.” Gordon will still have to make the jump, but the mechanics of doing so are vastly improved. 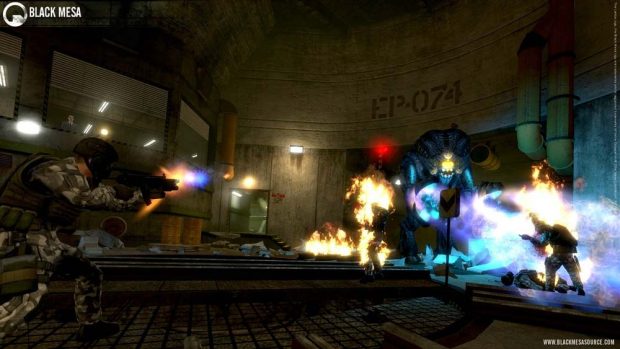 There are a number of other small and large improvements that make the game an excellent remake. The soundtrack is fantastic, and it fits the mood of the game well. Security guards are somewhat improved as well. The AI is mediocre, but the guards can take and deal more damage than in “Half-Life.” A perfect example of this was a guard who walked into a closet and could not figure out how to leave, but he actually killed a few zombies when he finally did. The horror element is preserved well; the Resonance Cascade looks as unstable and dangerous as it should be. Perhaps most significantly, “Black Mesa” expands on characters created in “Half-Life 2.” There’s a picture of Dr. Breen, and the player will meet Eli and Dr. Kleiner.

The game is not without fault. Loading times are long. The voiceovers are poor, though improved from the original. Platforming can still be frustrating. Most notably, “Black Mesa” is not a complete remake—it lacks the chapters on Xen, an alien dimension in the game. This may not deter some because the Xen levels were heavy on platforming and a far different experience from the rest of the game. Even so, “Black Mesa” will not be complete until those levels are released, if ever.

“Black Mesa” had high expectations, and it did what few games in that position have done: it met and exceeded most of those expectations. Despite the wait, this free game is a must-play. Eight years is a long time, but it arrived. I just wouldn’t hold my breath for “Half-Life 3.”