Opinion: Fear of a black quarterback

The NFL is steeped in traditions that it gained in a more overtly racist time, and those archaic traditions have embedded themselves in highly problematic ways. Football, by the nature of its reluctance to change, has become a snapshot of a larger cultural problem related to the stereotypes of black people. The toxic beliefs that continue to perpetuate themselves about black physiology and mental acuity need to cease.

Take, for example, the positional disparity between races in NFL. It’s been decades since the NFL’s ban on blacks playing center, middle linebacker and quarterback, the three positions that were most linked to intelligence, ended. Yet the disparity between the number of players of color at certain positions continue to be sizeable. The NFL is 70 percent black, yet only five of the 32 starting quarterbacks are. There are currently zero black kickers and punters in the league; former Raiders and Broncos Marquette King was the sole black punter for years, but a recent string of injuries has put his career on hold. On the flip side, there are positions that are void of white players. Of the 64 starting cornerbacks in the NFL, all are black; and all 64 have been black for over a decade. The last white professional player to start at cornerback is Jason Sehorn, who retired in 2003. On the offensive side, there are three white running backs on professional rosters in 2018, and all but one of them is perpetually regulated to the bench.

The race of a player establishes the paradigm they are judged by in the league, especially in positions where players of a certain race are a small minority. White linebackers are usually described as having good football IQ, and their physical traits are denigrated. Luke Kuechly is a surefire Hall of Fame player, but no one draws attention to his athleticism. Black players, on the other hand, are usually lauded for their physical prowess even when they have great football minds. Dont’a Hightower, who was drafted in the same year as Kuechly, was noted for his big lengthy frame while being scouted. His technical soundness as a linebacker was consistently glossed over.

On defense, this problem corrects itself. White players can show how great they are athletically because having good knowledge of the game is enough of an asset to get on the field. Black players can also show how intelligent they are with smart plays on the field because their athleticism is good enough to earn a starting role alone. But in positions where the perception of a lack of skill is too much of a detriment, players who are stereotyped are rarely awarded the opportunity. Having a smart cornerback doesn’t help you when receivers run past him for a long touchdown.

This brings us to the problem of a black quarterback. The quarterback is the brain of an offense. He must make decisions quickly and adjust on the fly. There is no room for mental errors. Yet, as to be expected in a league riddled with unscientific beliefs, the way that mental capacity is evaluated in the NFL is entirely bunk. The most direct test of intelligence is the Wonderlic, which players take at the NFL scouting combine. The test is effectively an IQ test, but it doesn’t test for the kind of intelligence the NFL looks for. Knowing 100 digits of pi won’t score a touchdown for you, but it can get you drafted in the NFL. The other proxies of intelligence the NFL uses aren’t much better. How a quarterback performs in college isn’t a good indicator of how they’ll do in the pros because the systems they’ll run and defensive schemes they’ll face are entirely different. Tim Tebow had an incredibly successful college career at the University of Florida, but he quickly floundered out of the league. With no good way of actually gauging a quarterback’s intelligence, teams effectively rely on gut instinct. And gut instinct, more often than not, hurts black quarterbacks.

The ideal quarterback is comprised of five things: They need a strong arm, good mechanics, solid decision making, great ball control and the presence of a leader. Almost every good college prospect at the position lacks one of these things. In the most recent NFL draft, quarterback Josh Rosen was criticized for not being a great team leader. Fellow top pick Josh Allen lacked good decision making and accuracy. Yet both were selected above Lamar Jackson, a black quarterback who vastly surpassed his competition in production and looked to have just as high of a ceiling as any quarterback in the draft. Jackson is a superior athlete to Rosen and Allen, yet his intelligence as a quarterback was challenged. And that challenge is damning. Before Jackson took a step on the field, there was talk of him switching positions. His ability to play quarterback was written off as a gimmick prior to him becoming a professional player. 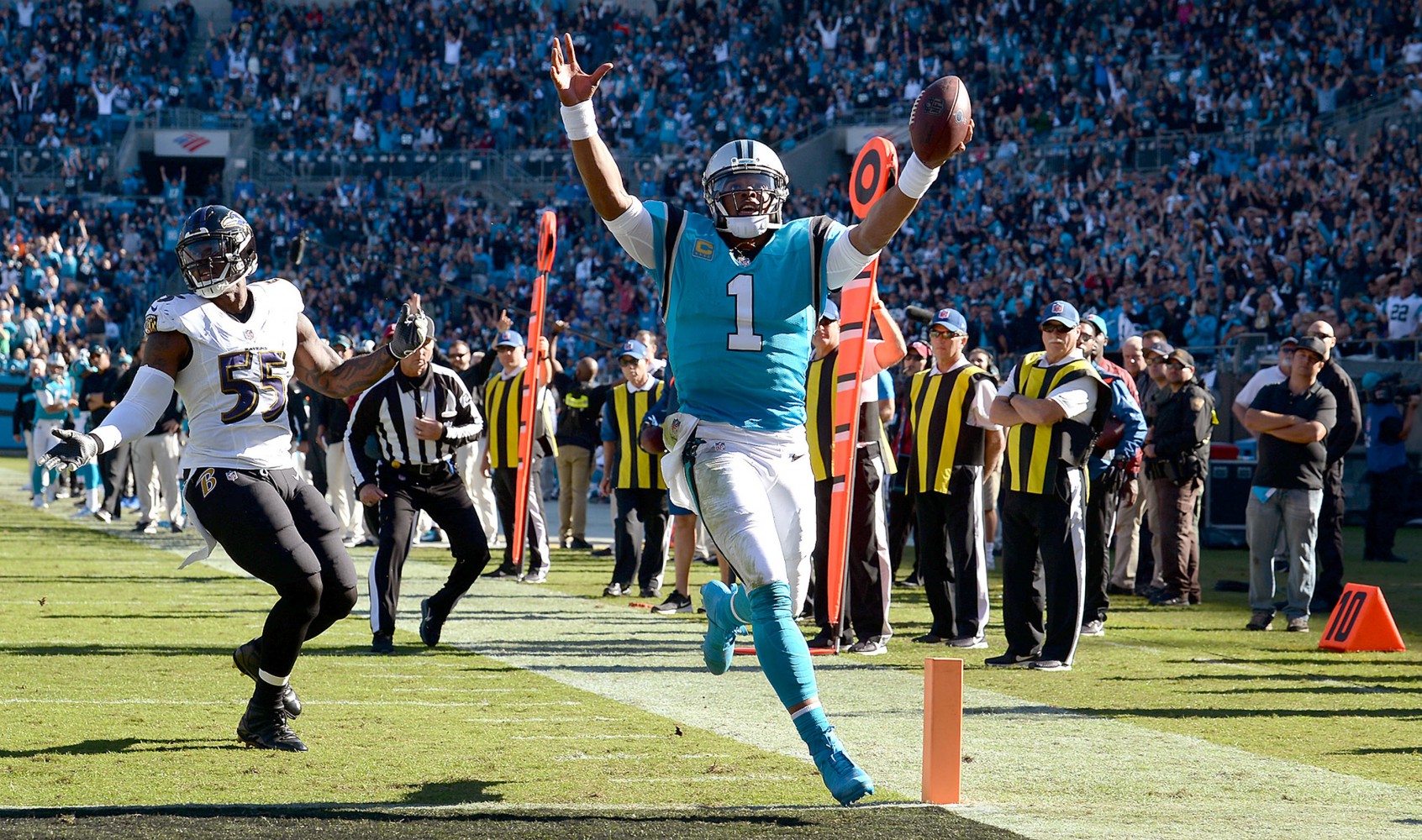 Carolina Panthers quarterback Cam Newton rushes for a touchdown against the Baltimore Ravens during fourth quarter action on Sunday, Oct. 28, 2018 at Bank of America Stadium in Charlotte, N.C. The Panthers defeated the Ravens 36-21.

Jackson’s dilemma reflects the larger issue with how stereotypes of black players are perceived. No matter how well they perform, they are seen as pure athletes. They are not thought of as “students of the game,” like many white players are. When they make great plays that would be explained as intelligence for white players, they garner the label of “instinctual,” which implies they’re somehow animalistic. This approach is rooted as far back as slavery, where blacks were seen as physically superior in the sense that they could perform certain physical tasks better but mentally inferior, thus justifying white control. The same stereotype of black physical superiority appears in daily life when a nurse refuses to give black patients the same level of pain medicine as white patients because they perceive black people as having higher pain tolerance. It’s present when a cop says an unarmed black man made them fear for their life; the implication of both strength and feral nature that makes a black person less than human, but more dangerous.

When black quarterbacks demonstrate skills that aren’t directly tied to their athleticism, those skills are minimalized by critics. Randall Cunningham was a prolific thrower of the football for over a decade, yet his accomplishments through the air are all but forgotten. People focus on his ability as a runner, not his ability to run an offense. Another early black quarterback, Warren Moon, was a solid college quarterback in the ‘70s and went on to become Canada’s greatest quarterback in the late ‘70s and early ‘80s. Moon led his team in Canada to five consecutive Grey Cups, the Canadian Football League’s equivalent of the Super Bowl. Only after writing the record books up north was he able to come to the NFL. Moon broke the mold of a black quarterback in the same way McCaffrey broke the mold for a white running back. Moon was an average athlete. He played the position like Tom Brady, not Michael Vick. The difference between Moon and Brady was that Brady, despite his below average athleticism, was still welcome on an NFL roster without proving himself. Moon was fortunate enough to be able to go to Canada to show this. Other black quarterbacks would have been written off and never would have received an opportunity to start in the NFL.

Even when black quarterbacks do succeed, the criticism is never refuted. It nags them for their entire career. If a quarterback regresses, it is used as proof that the success they experienced was a fluke. Donovan McNabb was relentlessly criticized for being slow and lazy after two rough games to start his 2003 season. He led his team to an NFC title that year. The year after, he led his team to a Super Bowl. Yet, no matter how well McNabb played, the label of lazy plagued his career. When McNabb finally was old and slow, it was fodder for those who had been waiting in the wings to celebrate his demise.

The black starting quarterbacks in the NFL right now have gotten where they are subverting expectations. Cam Newton was written off by many as being Tim Tebow 2.0 when he entered the league. The comparison was poor. Newton was a better athlete than Tebow, and his ability to throw the ball was leagues ahead of the former Gator great. Other critics attacked Newton’s character and ability to lead a team. They saw him as being in the same vein as Russell. However, unlike Russell, Newton’s character is unimpeachable, and his work ethic is top tier. Newton has earned recognition as a good signal caller, but he has never truly been able to shake off the idea that somehow his decision making deserves more scrutiny. When talking about quarterbacks making boneheaded decisions, Newton’s name might be lumped in by some analyst with Blake Bortles, despite having five more touchdowns and half the number of interceptions as the Jaguars quarterback through the first half of the season. No matter how well Newton plays the game, he is seen as an athlete first and a quarterback second. To break out of the mold and be seen as one of the elite decision makers in the league would be to finally escape the label of black quarterback, or even good black quarterback, and transition to just quarterback.