The Washington University softball team stormed from behind against Fontbonne to sweep the season series of the Wydown Showdown on Tuesday.

After two scoreless innings from both the Bears and Griffins, Fontbonne got on the board first in the top of the third frame. Fontbonne’s Daisy Watkins hit a single to start the inning. She then advanced to second off of an error. Then a sacrifice bunt by the next batter advanced Watkins to third with only one out. Another sacrifice, this time a fly ball out to right field, allowed Watkins to score and put Fontbonne up 0-1.

In the fifth inning, Wash. U. appeared to building momentum. After a ground out by sophomore Julia Flores, sophomore Kendall Schwartz knocked a single to the left side to get on base. Sophomore Natasha Ramakrishnan advanced to first off a fielder’s choice that sent Schwartz back to the dugout. Freshman Nicole Hay hit a single down the middle that advanced Ramakrishnan to second with two down. The chance to score dissipated when junior Amy Walsh knocked a ball high and directly into the mitt of the shortstop. Fontbonne escaped the inning with their lead intact.

“We had a couple of hard-hit balls earlier in the game, and honestly Fontbonne made some really good catches going back on the ball in their outfield and just getting it done,” said head coach Michelle Venturella. “We were doing a good job of making adjustments on the pitches we were facing, but we hadn’t had that timely hit.”

The Bears built off of their momentum in the 6th inning. Two quick singles put freshman Katie Gould and senior Taylor Arends on base with no outs. After a fly ball out by junior Mikaela Arredondo, freshman Kirsten Drabek reached first on a fielder’s choice, and Gould was caught at third. Down 0-1 in the bottom of the sixth with two outs and runners on first and second, Flores came through with a clutch double to the center right that drove in Drabek and Arends to put the Bears on the board and in the lead, 2-1. Schwartz singled after Flores and drove in another run, pushing the lead to 3-1.

Schwartz doubled up on hits on the day, going 2-for-3 with an RBI. She was the only Wash. U. player to record multiple hits. 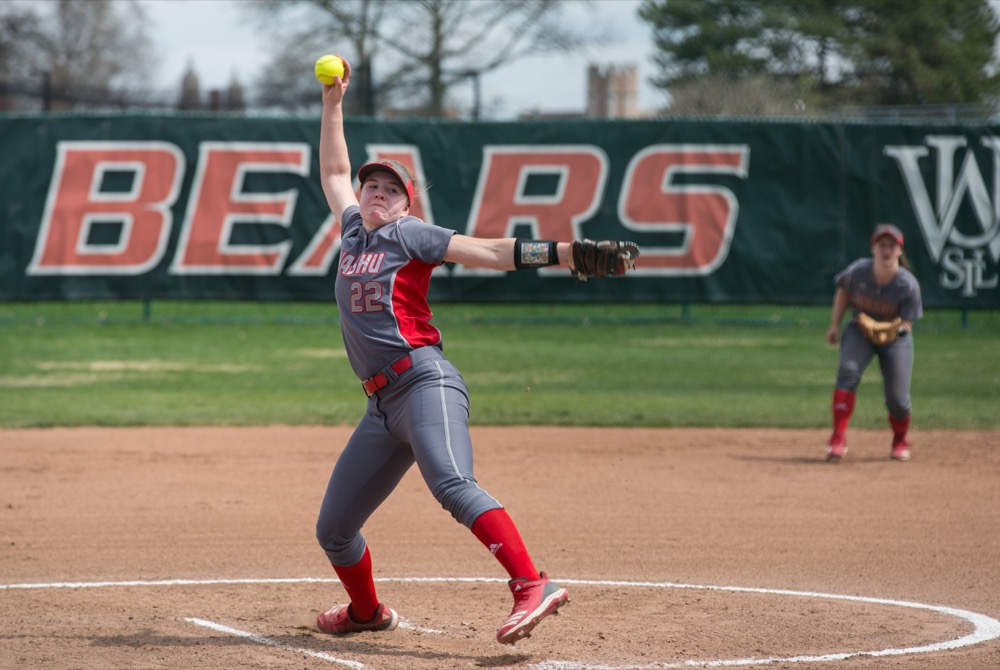 Fontbonne didn’t go away quietly. The Griffins’ Melanie Russo blasted a ball past left field for a solo home run in the 7th and final inning. Down one run and with no outs, Fontbonne looked poised to challenge the Bears in the homestretch of the game. Fontbonne’s Diamond Thomas bunted to reach first base with no outs, then a sacrifice bunt advanced Thomas to second. The Griffins’ chances virtually ended after Thomas left base early and was caught by the Bears’ shortstop. Watkins grounded out to end the game, 3-2.

Thomas went 2-for-3 for Fontbonne, joining Schwartz with multiple hits in the afternoon.

Wash. U. improved to 13-11 with the win, while Fontbonne dropped to 7-20. The Bears extended their all-time lead in the series against Fontbonne to 29-14. According to coach Venturella, while the rivalry between the two teams is not intense, there is a great deal of respect shared across Wydown.

“Of course, you want to maintain some of the traditions, but honestly my focus is more on every game, no matter who we play, trying to play the game to the best of our ability,” said Venturella. “I don’t really hear our team talk a lot about a rivalry with Fontbonne, because they’re across the street. I think that the nice thing is that you have a team like Fontbonne that we know we can have on our schedule, and that we’re going to face a team that’s going to come and compete in every game, every time we have the chance to play them. In that sense, you know we’re going to have good games. So that’s something that we look forward to no matter who we’re playing.”

To the extent that there is a rivalry, it serves more to excite the fans than to motivate the players.

“I think it’s just a fun way to get a little bit of excitement around two local teams so both sides can come watch their teams play.” Venurella said.

While the Bears have been hovering around .500 this season, they had played the hardest schedule in Division III softball entering Tuesday’s game, with an opponent win percentage of 65.7%.

Sophomore Abby Graegin (2-5) earned the win, giving up two hits and an earned run in three innings. Schwartz, who started the game, also gave up two hits and a run, but she was on the mound for an additional inning.

Wash. U. will continue its season Friday, April 19 at 1 PM. They will kick off a four-game series against New York University with a double header at Manhattanville College in New York. Venturella hopes for favorable weather conditions where her team can thrive.

“We have a younger team, and I think they’ve been doing a really good job at handling different things that have come up this season,” Venturella said. “For us, every time we have the chance to play ball, I’m just excited to get on the field with them.”