As the end of the regular season quickly approaches, Washington University volleyball is in a position to enter the playoffs either through the conference’s automatic bid or by the grace of an at-large bid, thanks to the team’s No. 16 national ranking. This isn’t really news for a program that’s made the NCAA tournament every year since 1987. But a month and a half ago, a playoff berth this year seemed anything but certain. 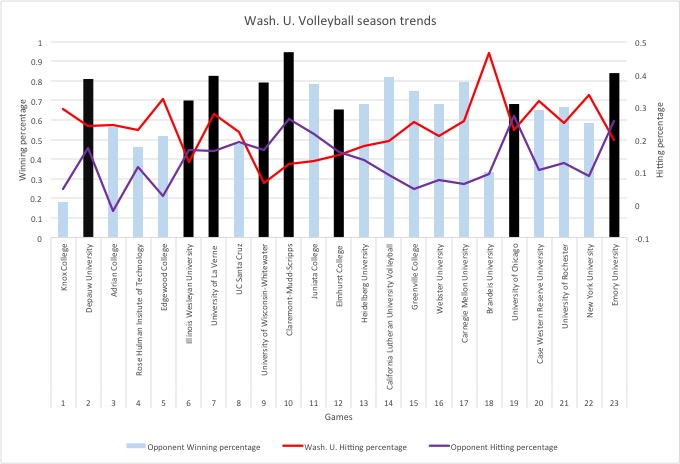 Two weeks into their season, the Bears sat at 5-5—their worst 10-game start since 1999. And it was about to get worse. Next up were three games in Ohio against Juniata College, Elmhurst College and California Lutheran University—ranked No. 5, 22 and 1, respectively, in the nation at the time.

Drop those three games and fall below .500 for the first time since the year 2000.

Only, that didn’t happen. The Bears pulled off upset victories over Juniata and Cal Lutheran. The wins breathed new life into their season. Since that weekend, the Bears have gone 7-2 and are surging as the playoffs fast approach.

Well, first of all, their schedule lightened up considerably. In their first 14 games—through their rebound weekend in Ohio—the Bears played eight teams that are currently either nationally ranked or received votes. In nine games since, that number has dropped to just three: University of Chicago, Carnegie Mellon University and Emory University.

Although national rankings are often a flawed way of assessing teams’ strength, they do offer a quick way to cut through the static that differing strength of schedules might add to win-loss percentages. For example, Greenville College currently holds a .750 winning percentage—nearly 100 points higher than the Bears. While Wash. U. has toiled against nationally ranked programs at the expense of the team record, the Panthers were able to pad their numbers against teams the Bears would consider cannon fodder. So, when the two teams faced off a month ago, Wash. U. swept Greenville with ease.

Against Chicago, Carnegie and Emory, Wash. U. only went 1-2. This indicates that their resurgence may be the result of an easier schedule. Still, the Bears are taking care of business against teams they definitely should beat. In their seven wins since Ohio, the Red and Green have outscored their opponents 21-2. This margin is thanks to their newfound offensive consistency. Since bottoming out at 0.066 against the University of Wisconsin-Whitewater the weekend before Ohio, the Bears’ attack percentages have risen steadily. This trend has held true through Juniata, Elmhurst and Cal Lutheran, all the way to a respectable .464 against Brandeis University. For an offense that heavily features several freshmen, including Chloe Stile at setter, it’s easy to chalk the upswing to more experience on the college court. According to head coach Vanessa Walby, however, the turnaround has actually started on defense. 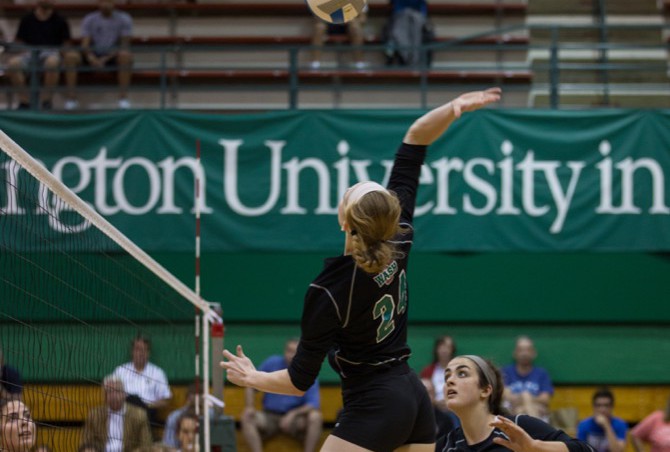 Senior Caroline Dupont hits the volleyball in the Bears’ Sept. 22 win against Webster. The Bears played well in the second UAA round robin over fall break, starting with three wins.

“We’re getting better passes up to our setters because our serve receive has gotten a lot better,” Walby said. “Our defensive digs are going up to the net in a better position for us to set all of our offense.”

The Bears’ four-set loss against the University of La Verne illustrates the importance of solid serve receiving. The Bears committed 10 receiving errors to La Verne’s two that game—a critical margin, considering the Bears were outscored by just 10 points.

Whatever the reason for the Bears’ recent push, they’ll get a proper test this weekend, when they return home for the Active Ankle Invitational to face University of Dubuque, No. 8 University of Texas at Dallas, Millikin University and No. 3 Wittenberg University.