For two careers that have paralleled each other in so many ways, it seems fitting that junior outside hitter Rexi Sheredy and junior middle hitter Caroline Dupont would notch their greatest milestone to date in the same game.

In a relatively uneventful four-set midweek victory against Westminster College, Sheredy and Dupont became the 25th and 26th members of the Washington University volleyball team to eclipse 1,000 career kills. 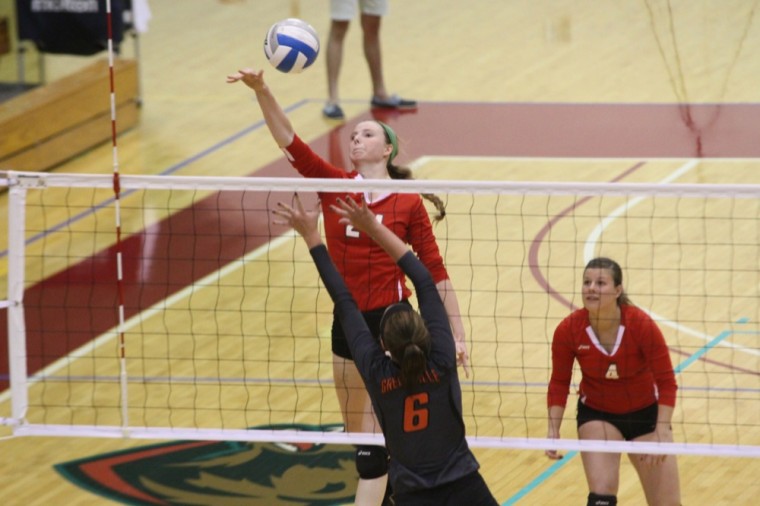 Junior Caroline Dupont spikes the ball out of the defensive reach of Greenville on Oct. 7. This coming Friday, the Bears will play in the Linda Slagell Classic in Decatur, Illinois.

From the moment they began their careers in 2013, Sheredy and Dupont accumulated offensive statistics at a near identical pace. When Sheredy led the team in kills her freshmen year with 375, Dupont was right behind at 374. When Dupont accumulated 348 her sophomore year, Sheredy finished with 346. They have each played in 104 matches and average 2.72 kills per set.

Entering Tuesday night’s game against the Griffins, Sheredy, who sat at 993 career kills mentioned the impending milestone to Dupont, who had 995.

“I remember looking at her at the beginning of the game and saying, ‘I need seven. You need five. Let’s do it.’ And she’s like, ‘Race you to it.’”

Sheredy was the first to reach the plateau with a kill for the first point in set three while Dupont broke through with a spike to give the Bears a 12-5 lead in set four. The Red and Green would go onto win handedly 18-25, 25-16, 25-18, 25-21 victory with Sheredy tallying a team-high 13 kills while Dupont had an uncharacteristically slow day, tallying just five. Sophomore libero Lauren Fournier let the team with 16 digs while junior outside hitter Amanda Palucki iced the victory with a kill off a set from senior setter Allison Zastrow. Sheredy and Dupont would finish the game with 1,006 and 1,000 career kills, respectively.

In the years of chasing each other’s statistics, Sheredy and Dupont have turned race into a friendly competition that extends beyond the hardwood.

“Caroline is one of my best friends on the team,” Sheredy said. “We live together actually, and I couldn’t imagine sharing it with anybody else but her.”

This was not the first chance the duo got to share a milestone. Early last season, they surpassed 500 kills in the same match against Heidelberg University.

With their most recent milestone, Sheredy and Dupont join senior middle hitter Jackie Nelligan, who surpassed 1,000 kills on Oct. 9 against Loras College, as the three active Wash. U. players with 1,000-plus kills. Along with senior outside hitter Nkiru Udenze, who has 272 kills on the season, head coach Vanessa Walby knows her offense can come from anywhere.

No other Bears squad has ever had three active players have 1,000-plus career kills. In fact, Sheredy and Dupont just became only the fourth pair of teammates from the same class to achieve that mark and the first since 2003.

However, with three regular season games left, three more in the University Athletic Association tournament and a likely NCAA tournament berth on the way, the Red and Green can do themselves one better. Udenze, who currently sits at 934 kills, is on the precipice of cracking the club. Given a minimum of seven games left to play she need only average a shade over 9.4 kills a game. Considering Udenze has tallied 10 or more kills in five of the past six matches and the fact that conference and tournament games promise at least a few five-setters, the goal seems within reach.

The Red and Green’s front court has a chance to push themselves further into the Bears’ record book this weekend when they travel to Decatur, Ill., to square off against Central College and Millikin University.