By the rankings, the University Athletic Association has the deepest crop of volleyball teams in Division III.

With four UAA teams ranked in the top 25 in the country this season, the most of any conference, gone are the days when Washington University could sweep through its conference schedule with ease. However, this year’s squad started out on the right foot in UAA play with a trio of victories over New York University, Rochester University and the University of Chicago. 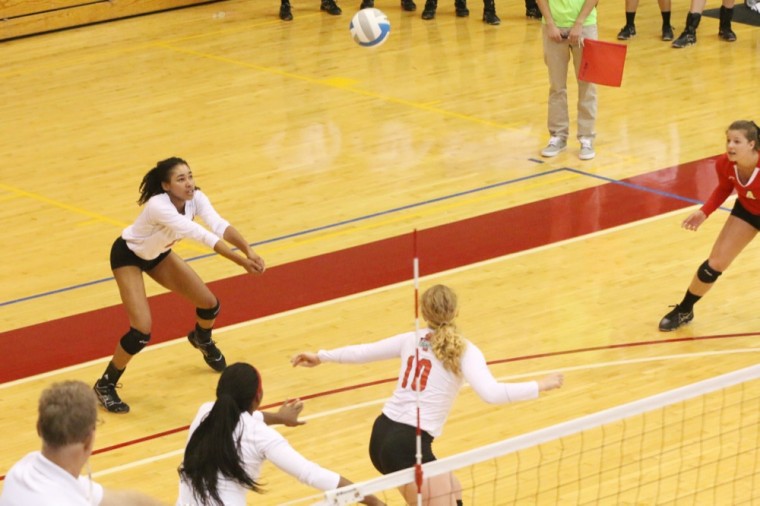 Senior Nkiru Udenze helps make a play during the Bears’ 3-0 win over Cornell College on Sept. 12th. This weekend, the volleyball team won all three games during the first round of the UAA Round Robin, which was held at New York University.

The highlight of the weekend was No. 2 Wash. U.’s four-set win over No. 16 Chicago, which had made a recent pattern of upending highly ranked Bears teams. And after Chicago eked out a first-set victory on Sunday, it looked like another upset was on the docket.

But Wash. U. picked up its offensive pace for the rest of the match and battered Chicago’s defense to the tune of a .316 hitting percentage in sets two through four. Overall, the Bears collected the best hitting percentage of any of Chicago’s opponents this year, and that output was good enough for a 24-26, 25-23, 25-22, 25-19 Wash. U. win.

Four Bears posted double-digit kill totals, with junior outside hitter Rexi Sheredy leading the way with 18 kills and 21 digs. Senior setter Allison Zastrow posted 55 assists, one off her career high, in spreading the ball around to her attackers.

And junior Caroline Dupont starred in the middle, where she spent the weekend feasting on a steady diet of kills: She hammered 13 on just 19 attempts against NYU, 12 on 18 against Rochester and 14 on 23 against Chicago.

Head coach Vanessa Walby attributed the efficiency and Dupont’s involvement in particular to an improved transition from defense to offense.

“Our digs were more efficient—they were getting closer to the net, so it was a lot easier to have all three of our attackers involved,” Walby said. “It makes things less predictable.”

As the match progressed, Walby also saw the team’s fitness pay dividends, and she complimented the strength and conditioning staff for keeping the Bears fresh at the end of a long weekend of games.

“Our girls weren’t gassed at all and still had fresh legs. We were able to run our game plan without making adjustments because we’re tired,” she said.

Chicago proved the Bears’ sternest test of the weekend as Wash. U. earned three-set sweeps over both NYU and Rochester. Those wins continued Wash. U.’s tradition of bullying those two conference opponents: With Saturday’s victories, the Bears improved their all-time UAA record against NYU to 42–2 and ran their streak against Rochester to 47 consecutive wins.

The Bears had at one point held a similar streak against Chicago, winning 34 consecutive matchups from 1987–2011, but Chicago has turned the tables in recent years with wins in four of five regular-season contests.

The first two of those wins came under Walby, who coached Chicago from 2008–2013. Although she said that coaching against her former program is “not that big of a deal,” Walby added that more important than gaining a measure of revenge against the Maroons was seeing the Bears sweep a weekend of competitive UAA play.

“I’ve seen almost every Division III team for the most part, and it’s pretty easy for me to say our conference is one of the tougher conferences in the country,” she said.

Conference play continues in two weeks, when the Bears play the other half of the UAA, including a highly anticipated contest against No. 3 Emory University. But first, they travel to Naperville, Ill., next weekend for a four-game nonconference slate at the North Central Invitational.