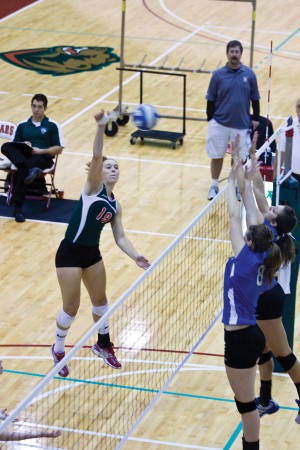 Junior Lauren Budde spikes a ball against Hanover College on Oct. 30. The Bears won all three of their NCAA regional matches over the weekend to reach the quarterfinals, which begin Nov. 19 at the Wash. U. Field House.

It has been 14 years since the Washington University women’s volleyball team won back-to-back national championships. The Bears have a chance to bring that streak to an end on their home floor Nov. 19-21.

On the road for the first weekend of the 2010 Division III NCAA tournament, the No. 3 Bears (34-3) began by defeating Beloit College 3-0 on Friday. Wash. U. then took out a resilient Wartburg College squad 3-1 on Saturday. On Sunday, they disposed of No. 14 University of Wisconsin-Platteville 3-0 to take the Kenosha Regional Championship in Kenosha, Wis., and move within three wins of a national championship repeat.

“It’s just a feeling you can’t describe, being in the situation right now and having three more games and we can have it all,” said sophomore Marilee Fisher, who tallied 128 assists over the weekend’s three games. “We’re all just feeding off of that energy.”

In Sunday’s match, Wash. U. punched its ticket back to the NCAA quarterfinal by defeating Platteville (25-16, 25-21, 25-19), which had already taken out host school and No. 8 Carthage College on Saturday. In each of the first two sets, the Bears broke an early tie behind a run of serves from sophomore Kelly Pang, taking a lead that they wouldn’t relinquish.

After Platteville tied the third set at 19-19, a kill by freshman Kaia Schwartz gave the Bears the edge, and four more points in a row brought the Bears to match point. Junior Lauren Budde then blocked one attempt back to the Pioneers, and Budde and freshman Meghan Byrne blocked the final attempt to the floor, giving Wash. U. the match and the regional title.

Byrne had 12 kills to lead the team, while Budde picked up 11 and freshman Tessa Blood had nine. Defensively, Pang’s 31 digs were a career high for a three-set match.

On Friday, the Bears began the tournament on a high note by taking out Beloit in straight sets (25-18, 25-13, 25-11). The Red and Green’s hitters put on arguably their best show of the season: The team registered a phenomenal hitting percentage of .480 and committed a season-low three errors over the entire match.

“It was a good way to start off the run, going out and playing as hard as we can,” Fisher said. “Every game that we play from now on can be our last, and that was a driving factor behind how we played.”

Byrne’s 13 kills led the team, and Fisher ran the offense efficiently with 43 assists over the three sets.

Wartburg took the advantage late in the second set, taking three straight points to break a 22-22 tie and win the set 25-22.

With the score tied at 15-15 in the third set, the Bears, coming out of a time-out, took the next three points and never looked back, winning 25-19. The team saved its best volleyball for the fourth and final set, as they jumped out to a 7-1 lead and cruised to the set and match victory.

Budde, with 18 kills and a .342 percentage, was the leader of the Bears’ offense on the day, and the team made it through to the regional championship round—for the 24th straight season—despite hitting at its lowest mark of the season at .146.

“It’s very possible that our region was the toughest region in America,” head coach Rich Luenemann said. “We knew we were in for a good match [against Wartburg]. It wasn’t as though we were sluggish. When two good teams play each other…sometimes it comes down to a war of attrition. We executed very well.”

Pang (67 digs on the weekend), Budde (40 kills, 46 digs) and Byrne (38 kills) were named to the regional all-tournament team, and Budde was tabbed as the region’s most outstanding player.

The Bears have the home-court advantage for the final weekend of the season: the NCAA championship, hosted by Wash. U. at the Field House. The Red and Green will begin their weekend on Friday against University Athletic Association rival, No. 15 New York University. After taking their first loss of the season to the Violets back on Oct. 17, the Bears returned the favor by sweeping NYU in the University Athletic Association championship on Nov. 6.

The rubber match for the two squads begins on Friday at 8 p.m.

“It’s going to be amazing,” Pang said. “Anywhere you go, you want that same intensity, that same urgency, that focus, that drive, but being home is a comfortable feeling. I’m just really excited.”