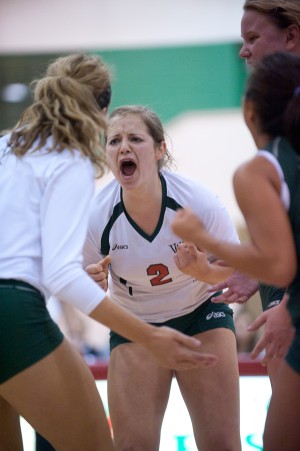 Sophomore Marilee Fisher, seen here in a game against Wittenberg, recorded 164 assists over the weekend, including 52 against rival Juniata College. The bears are now 14-0 going in the UAA round robin play.

The tradition of excellent matches between the Washington University women’s volleyball team and Juniata College continued this weekend—and the recent trend of the Bears coming out on top remained intact as well.

The No. 1 Bears and No. 2 Eagles, who fought it out in last year’s national championship match, engineered another instant classic on Saturday at the DePauw University Invitational in Greencastle, Ind. Once again, it was Wash. U. who emerged victorious with a 3-2 win (27-25, 21-25, 20-25, 25-21, 18-16), highlighting another weekend of four wins for the Bears. With these wins, the team stands at 14-0 on the season.

“It was a really nice weekend for us. The cherry on top was beating Juniata, but it was a very good tournament,” sophomore Kelly Pang said.

The victory was the Bears’ third straight over the Eagles, and much like the 3-1 victory in last year’s championship match and the 3-0 victory on this weekend a year ago, Juniata made it far from easy. After the first set, in which Wash. U. rallied from down 17-20 to win, Juniata jumped out to an early lead in each of the next two sets and never looked back, going into the fourth set with a 2-1 advantage.

But the Bears responded by jumping out to a lead in the fourth set and managed to force a decisive fifth set behind a hitting percentage of .393 for the set (after hitting a combined .145 in the second and third).

“We’re all ecstatic, and we’re very happy as a team how we played and how we pulled together after being down 2-1,” sophomore Marilee Fisher said. “We came out strong in the fourth game and took control early.”

Slowly, the Bears inched toward a victory in the fifth set, getting within three points of the win with a 12-7 advantage before Juniata stormed back to tie the match at 12. After staving off one match point to tie the match at 14, Juniata fell behind and the Bears didn’t look back, taking the set and the match with an 18-16 victory.

The marathon match was the first five-set match of the year for the Bears and the first to last longer than two hours in time. Junior Lauren Budde led the team with 24 kills while freshman Meghan Byrne picked up 11 more, paced by Marilee Fisher’s 52 assists. Pang and freshman Tanya Marvi led the back-row efforts with 32 and 16 digs, respectively.

“The match with Juniata was a heavyweight fight with both teams taking turns running off strings of points,” head coach Rich Luenemann said. “They’re easily the best team we’ve faced this year and don’t show any weaknesses.”

With another spectacular match with Juniata in the rearview mirror, the Red and Green turned around later in the afternoon and faced No. 13 Carthage College—whom the Bears faced last week in St. Louis—sweeping the Lady Reds 3-0 (25-15, 25-21, 25-17) to take the match and the championship. Pang and Fisher were named to the all-tournament team.

But the big match for the weekend took place on Saturday, and in facing their biggest challenge of the season, the Bears emerged with their currently undefeated record intact.

“We all feel good about beating [Juniata], but I think we need to keep the mentality that it’s just another game,” Fisher said. “Just because it’s a rivalry, we can’t think anything of it. We just need to move on with the season. It was a big obstacle and we need to continue to improve.”

The Bears return to action on Saturday, Oct. 2, at 12:30 p.m. (EDT) in Atlanta, when they face Brandeis University to begin the first University Athletic Association Round Robin.