Volleyball: Wash. U. to honor national champions and women’s soccer 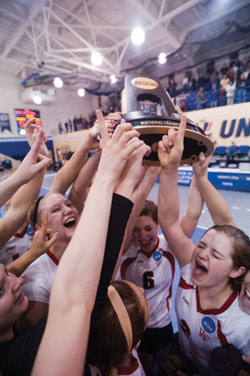 The volleyball team lifts their 2009 NCAA Division III national championship trophy as they celebrate their 3-1 victory over top-ranked Juniata College. The Bears will unveil their championship banner in the Field House at 3 p.m. Sunday. (Matt Mitgang | Student Life)

The entire country will be celebrating national champions on Sunday, but the day will be more special for several Washington University community members. While most people will be keeping tabs on the NFL matchup between the Indianapolis Colts and the New Orleans Saints, Wash. U. will honor its NCAA Division III national championship volleyball team and national runner-up women’s soccer team.

The Bears captured their NCAA-record 10th national championship with a 3-1 victory over No. 1 Juniata College on Nov. 21, 2009. Sophomore Lauren Budde was named Most Outstanding Player of the 2009 championship with 15 kills and five blocks in the game. Sophomore Kristen Thomas and freshman Kelly Pang were also tapped for the all-tournament team. The American Volleyball Coaches Association also chose Pang as its Division III National Freshman of the Year.

“It feels good to know that the banner is going to hang there forever,” said senior Erin Albers, co-captain of the volleyball team. “[People should] show their support, not just for our team, but for the soccer team because they’re deserving.”

The University will also honor the 2009 national runner-up women’s soccer team. The Bears’ appearance in the title game was the first in program history. Wash. U. fell to top-ranked and undefeated defending champion Messiah College 1-0 on Dec. 5, 2009, in San Antonio.

Their squad tied a Wash. U. record with 17 wins en route to their fourth straight UAA championship and national championship game appearance.