Because history likes to repeat itself, the Washington University women’s soccer team had to face Messiah College in the finals. Because the Red and Green like to play their backs high, the team was in the right position for a gorgeous feed into the net. Because things can never be that easy, Wash. U. let up a goal in the final seven minutes of regulation. Because they play physically and fight for every 50-50 ball, the Bears were able to fend off the Falcons’ crisp passing attack. Because of a strong defense, a little bit of luck and a perfect string of penalty kicks, the Red and Green are national champions. 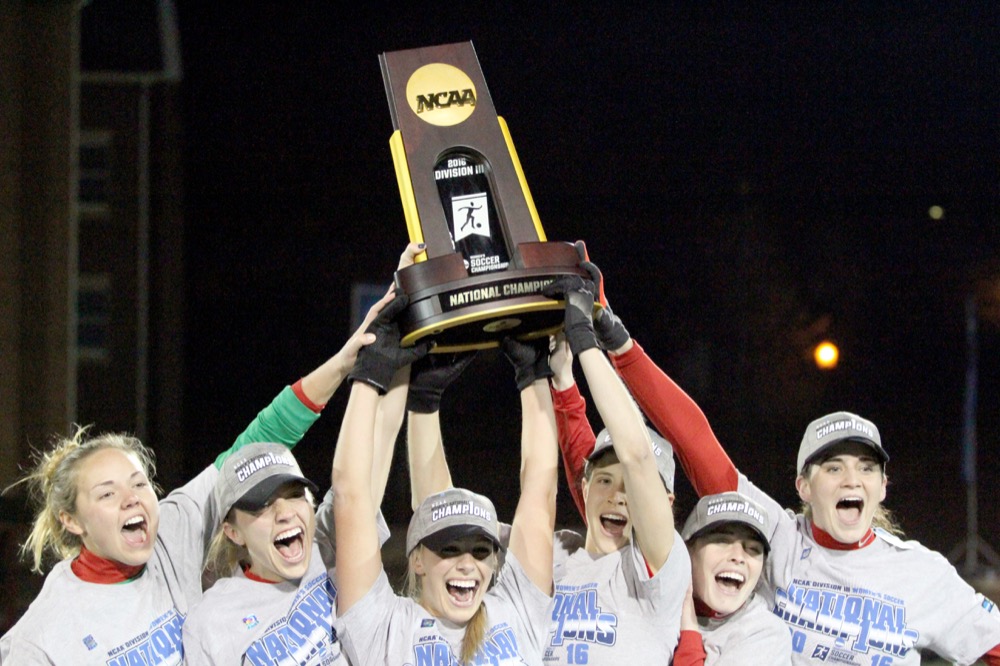 For the second year in a row, Wash. U. and Messiah battled to a 1-1 tie through 90 minutes of regulation and two 10-minute overtime periods—this time on a frigid Saturday night in Salem, Va. And when it came time for the shoot-out, instead of the Bears’ star-studded senior class, it was a cast of younger role players who shouldered the burden and converted all five of their penalty kicks to propel women’s soccer to the team’s first-ever national title. Sophomore midfielder Caroline Dempsey, junior back Kelly Von Zup, sophomore midfielder Jessica Kovach, junior midfielder Gillian Myers and junior back Megan Wolf, in that order, each took their turns in the box. The team had practiced with these five players Tuesday, before the weekend. During that practice, all five were hitting their mark. Saturday night was no different: Messiah’s goalie couldn’t touch a single shot.

It was also comforting before the penalty kicks even started that the Bears had senior Lizzy Crist in goal. In her two career shoot-outs heading into the game, Crist had collected twice as many stops as conversions allowed, a mark that includes the three she had against Messiah in the NCAA semifinals last year. But while Crist’s goalkeeping had rescued her team’s season many times over in her three years as a starter, in this particular case, in this one shoot-out against the Falcons, she didn’t have to make a single save.

Messiah’s second kicker, freshman Sunny Gelnovatch, banged her shot off the crossbar, where it ricocheted down onto the goal line. The spin on the ball took it back into the box. That was the one break the Bears needed. From that point on, it was a countdown.

Wolf had the final kick, and when she sent a line drive to the back right corner of the net, she turned, leaped and pumped her fists while her teammates mobbed her at the top of the box. For a player whose exploits rarely show up on the stat sheet, Wolf experienced one of the most triumphant moments in all of sports.

“I don’t remember it going into the net at all,” Wolf said. “All of a sudden, I just turned around and started screaming, and I saw my teammates running towards me…This is something every athlete has dreamed of since they were a little kid.”

“I was lucky enough to be the last one, but honestly, all the girls in front of me did their job,” Wolf added.

In the outskirts of the throng, sophomore midfielder Maggie Crist and Lizzy Crist, sisters and first-team All-Americans, shared a long, tearful embrace.

Unlike in last year’s semifinal game against Messiah, where the Bears beat the longest odds to pull out an upset over the heavily favored Falcons, both teams entered Saturday’s math as peers—maybe granting Messiah a slight advantage for demolishing No. 3 Williams College 4-1 in the quarterfinals two weeks earlier. That assessment played out in the stat sheet, with the Falcons holding a 16-10 shot advantage (7-5 on target) through 110 minutes. 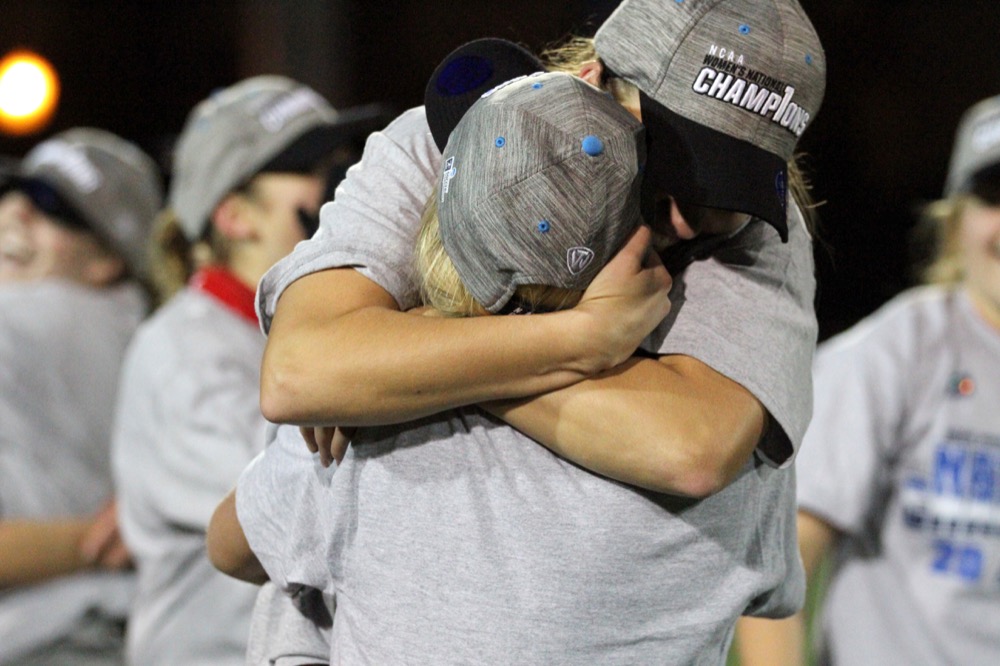 Still, it was the Bears who struck first. In the 72nd minute, senior back Lexie Sprague beat her defender on the wing and sent a well-placed cross into the box for freshman forward Taylor Cohen. Cohen sent the ball towards the net with a header and chipped the ball over the Messiah goalie and into the net.

“Lexie played a perfect ball in. And at that point it’s—as coach always says—‘total body sacrifice,’” Cohen said. “If you can get any part of your body on that ball and put it on the frame, you have a likely chance of scoring.”

Messiah wouldn’t go quietly, however. With under seven minutes to play, a shot from Falcon sophomore back DJ Cole was blocked by senior Megan Nicklay, but senior forward Erin Sollenberger was there to fire the rebound into the net.

Quiet this game was Messiah’s star striker Marisa Weaver. The senior who led all of Division III with 26 goals this season and who had already netted five scores in the postseason was held to just three shots all game. It’s a strong parallel to last year’s semifinals against the Falcons, when the Bears held Nikki Elsaesser, 2015’s leading scorer, to one good chance in 110 minutes. On how the Red and Green have been able to find kryptonite for Messiah’s dangerous strikers, head coach Jim Conlon offered one name.

Nicklay patrolled the back line for all 110 minutes as the last line of defense for the Bears, often using her 5’8’’ frame to box out on contested balls and to block shots.

Senior goalkeeper Lizzy Crist fails to stop a penalty kick during a shootout against Messiah College. The Bears prevailed in PKs after coverting on all five of their attempts.

Messiah was still able to force its fair share of heart-stopping moments. With 18 seconds left in the second overtime, Crist was in position to intercept a deflected crossing shot from Messiah. The ball bounced off her hands for a breathless second, before she was able to fall on it in front of a charging Weaver. That was the closest the Falcons came to ending this game. Instead, it was another upset in the budding rivalry between Messiah and Wash. U.

Messiah generated most of its early chances by taking advantage of the Bears’ aggressive playing style. In order to generate pressure on offense, Sprague and senior back Hannah Rosenberg often moved up on the wings. This left Wash. U. vulnerable down the sidelines, where a Falcons player could slip behind and receive the ball with room. After Messiah played that vulnerability to several dangerous crosses in the first half, Rosenberg and Sprague made the adjustment.

“Attacking the wing is usually a pretty good plan against us, when you have Lexie Sprague and Hannah Rosenberg on our team. Because they’re so aggressive at going forward, there is usually some space behind them,” Conlon said. “I thought they made a very conscious, mature decision as seniors to get out of their personal game plan and hold the back line’s formation a little better.”

Crist made a season-high six saves during the game.

To reach the finals, the Bears beat conference rival Brandeis University 2-1 in the Final Four a day earlier.

Senior back Katie Chandler played hero in that game, netting both of Wash. U.’s goals. The first came early in the sixth minute, when she beat her defender on a through ball from Cohen. The second that put the Bears up for good came in the 49th minute when junior midfielder Mia Mastroianni threw her body in front of a clear attempt in the Brandeis box. The deflection bounced right to Chandler, who redirected it off the goalkeeper’s hands and into the net.

Crist added three saves in goal against the Judges.

Chandler and Crist were named the NCAA Most Outstanding Offensive and Defensive Player, respectively. For Crist, it was her second-straight year winning the award.

This is catharsis for a Bears team that can finally hoist the championship trophy after three straight years of postseason heartbreak. After losing in penalty kicks in the quarterfinals back in 2013, surrendering a last-second goal in the first round in 2014 and finally making it to the finals only to lose on one well-placed through-ball, Wash. U. has its glory moment.

It’s also a long overdue moment for the Washington University athletic department as a whole. Despite annually cultivating one of the strongest Division III athletic programs by Learfield Sports Directors Cup standards, the Bears haven’t claimed a national championship since the women’s cross-country team took home the title in 2011. That’s not for lack of close chances, mind you. Just this fall, women’s cross-country and volleyball each took home national runner-up trophies. For a program that was stuck on 19 for so long, reaching an even 20 has been an elusive plateau. The hunt for 21 begins.