And then there were four, again

For the second year in a row, the Washington University women’s soccer team has made it to the NCAA Division III tournament Final Four. And because history likes to repeat itself, high-powered Messiah College again looms as a potential daunting opponent, flashing its shiny 21-2 record and it’s 4-1 drubbing of defending National Champion Williams College in the Sectional Final. In the tournament semifinals last year, the Bears delivered one of the program’s signature moments, defeating the heavily favored Messiah in sudden death penalty kicks.

But the No. 6 Falcons aren’t the only team that’ll have the Bears playing back old tape. No. 11 University of Chicago and No. 23 Brandeis University, two members of Wash. U.’s own conference, also managed to make it to the Final Four, turning the tournament’s last weekend into somewhat of a tour de force for the University Athletic Association.

The Wash. U. women’s soccer team faces off against Luther College in the second round of NCAA play. The Bears will face No. 23 Brandeis in the semifinal match this weekend.

The Bears will face Brandeis in the semifinal match Friday night in Salem, Va. If they advance, they’ll square off against the winner of Chicago and Messiah Saturday night in the finals. All three teams defeated top-5 nationally-ranked opponents to get to this position so don’t count any game as a given. If there is a national championship in the Bears’ future, it’ll likely be their defense that carries them there.

Defense wins championships. That’s how the old aphorism goes, and in the Bears’ case, it couldn’t be more true. Let’s lay out a couple of statistics. The Bears have allowed six goals this year. Three of them came in one fluke loss to the 5-7-6 University of Rochester Yellowjackets. That was back on Oct. 1. Since then, the Bears have played 1,129 minutes and 37 seconds—and they’ve only allowed one goal. This streak has helped give them the third best goals against average (0.264) in the NCAA. All three divisions. Period. And no one can say that the Bears have been able to feast against weaker opponents. The Bears are 5-0-1 this year against ranked teams and, unsurprisingly, have not allowed a goal.

Last year’s finals-bound Bears were also known for their smothering defense, but even that team struggles to measure up. Right before the Final Four in 2015, the Bears had let up a similarly staunch seven goals, but also allowed 9.2 shots per game. This year’s team has the latter number shaved that number all the way down to 6.5.

Senior goalkeeper Lizzy Crist, as she was last year, is the poster child for this defense. She allowed four goals all season, and, like the team she represents, three of them came in that one game against Rochester. As a result, she set a single season school record this year with 13 shutouts and cultivated her own personal .213 goals against average, second-best in the NCAA. Crist’s steady presence in goal has been invaluable all season for the Bears, but she can’t win games all by herself—that is unless a match goes to a penalty shoot-out. In that case, she can and has.

When last year’s semifinal game against Messiah went to penalty kicks, it was Crist who stonewalled the Falcons for three straight saves to propel the Bears in the finals. She did it again in the third round of this year’s tournament, making three stops against No. 10 Hardin-Simmons University. Watch shootouts at any high level, and you realize how difficult it is for a goalie to make just one stop. Crist catches them in droves. 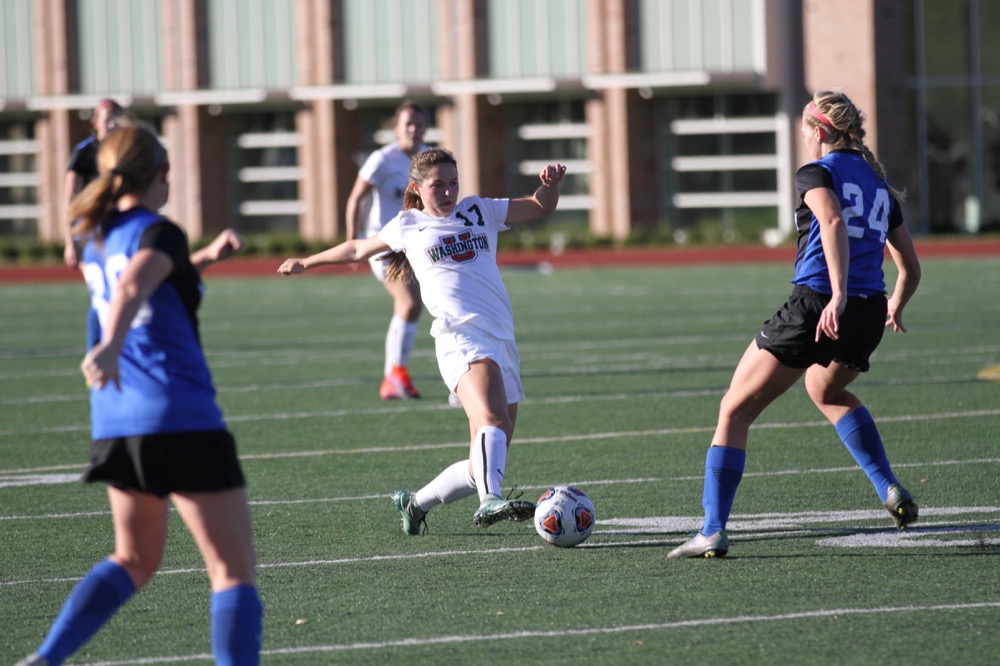 Darcy Cunningham slides for the ball in the Bears’ 3-0 win against Luther. The team will travel to Salem, Va. for the NCAA Division III playoffs where they will face No. 23 Brandeis.

Crist’s performance is easy to recognize, because it can be flashy and because it shows up in the stat sheet. But the Bears also have a defender who’s their own version of what a lockdown corner would be in football. Back to that game last year against Messiah, senior center back Megan Nicklay was essentially man to man against Nikki Elsaesser, a forward for the Falcons, who by season’s end, had single-handedly outscored other 228 teams in Division III. Nicklay held Elsaesser to just one shot on goal in 110 minutes. Elsaesser is graduated now, but Messiah had another prolific striker ready to step in. Senior forward Marisa Weaver leads all of Division III with 26 goals and takes over a quarter of Messiah’s shot attempts. Stopping her, just like stopping Elsaesser, may be the key to beating Messiah if the Bears end up making it to the finals. In that case, Nicklay’s talents may come in handy.

Nicklay’s work is tough to notice, but the senior back also got to play hero in the Bears’ quarterfinal match two Sundays ago against No. 2 Trinity University. The Bears and the undefeated Tigers went scoreless into the 68th minute when senior back Lexie Sprague sent a corner kick crossing perfectly in front of the net. Nicklay came charging in from the top of the box and sent a bullet of a header into the back of the net. That proved to be the game winner.

Between Nicklay, Crist and the rest of the team’s back, middle and front line, Wash. U. has a star-studded cast with a second chance at glory. No one’s saying this weekend will be easy, but if everyone else can’t score, things get a whole lot easier for the Bears.