The thrill of victory, the agony of defeat

Bears upset No. 1 Messiah, fall to Williams in national championship

The Washington University women’s soccer team rushed midfield on Friday afternoon after shocking the Division III soccer world with an upset, penalty-kick victory over the heavily favored Messiah College in the Final Four.

But the next day, the December air suddenly felt a lot colder for the Bears when it was Williams College celebrating on the field and hoisting the trophy at Swope Soccer Village in Kansas City, Mo.

In their first championship match since a 1-0 loss in 2009, history repeated itself for the Bears. The Wash. U. defense was caught sleeping in the 42nd minute when the Ephs scored off a through ball against a backpedaling back line. That was all the offense Williams (21-1-2 record) needed as Wash. U. (20-3-1) could only muster two shots on goal en route to a 1-0 defeat.

“We put together a hell of a season. It’s clearly not how we wanted to end it,” head coach Jim Conlon said. Team members console each other immediately after Saturday’s 1-0 loss to Williams College, marking the Bears’ second 1-0 finals defeat since 2009 and ending their run at the program’s first title.

Hopes were high for the Bears as they took the field for the title match on Saturday, and they blitzed Williams with an early attack that nearly produced a pair of goals.

The Red and Green started the game with an aggressive push into Williams territory, forcing a corner kick 1:21 in. Junior Hannah Rosenberg sent a high arcing ball about 10 yards in front of the net that senior Olivia Lillegraven headed toward the goal. A redirect by junior Katie Chandler sent it past the Williams goalie, only to see it kicked up into the crossbar by an Ephs defender. The ball then ricocheted down onto the goal line and bounced back up over the net. Questions initially surfaced over whether the ball had fully crossed the plane of the goal before bouncing out, but video evidence later confirmed the referee’s call.

Just moments later, Chandler had another go at net, but her shot from 25 yards out hit the crossbar and bounced away from the goal.

“We asked the girls to come out fast,” Conlon said. “I thought our girls gave a great effort, came out of the gates running, and the soccer balls didn’t go our way. It was maybe a combined 12 inches for two or three goals. It’s the game we all love and hate at the same time.”

Chandler ended up leading Wash. U. with eight attempted shots on the afternoon, but as it turned out, the Bears’ best scoring chances of the whole game came in those early minutes. Williams utilized a crisp passing attack to control the pace of the game and limit the Bears’ quality opportunities on offense, and for the rest of the match, Wash. U. could only find space to snipe at the Williams goal to no avail from 20-plus yards out.

The only other Wash. U. shot on target was a 25-yard boot from sophomore Megan Renken in the 48th minute, which the Ephs goalie caught standing up.

Meanwhile, eight of the Ephs’ shots were on target, forcing junior goalkeeper Lizzy Crist to make seven saves, the most by a Wash. U. goalie in the NCAA tournament since all-time shutouts leader Clara Jaques (‘12) made 12 in a 3-1 loss to Wheaton College in the 2012 sectional championship.

To try and produce some more offensive opportunities, the Bears adapted to a more offensive strategy in the latter two-thirds of the match and moved midfield players up in an attempt to create a numbers advantage near the box. That plan backfired when a quick turnaround by Williams led to the Ephs’ score.

“I think we took a chance by pulling a player or two from the middle of the park and trying to get them up top on the [Williams] back line,” Conlon said. “We knew if we could get to their backline with our frontrunners, we might have had a better opportunity to score on goals. Tip my hat to them that they kept that ball in the middle of the park and exposed the exact space that we voided.”

A prepared Williams squad held the Bears’ offense punchless for most of the match, and the Red and Green failed to register a shot after the 71st minute. Holding the lead and with Wash. U. unable to threaten, the Ephs ran out the clock to clinch their first national championship. 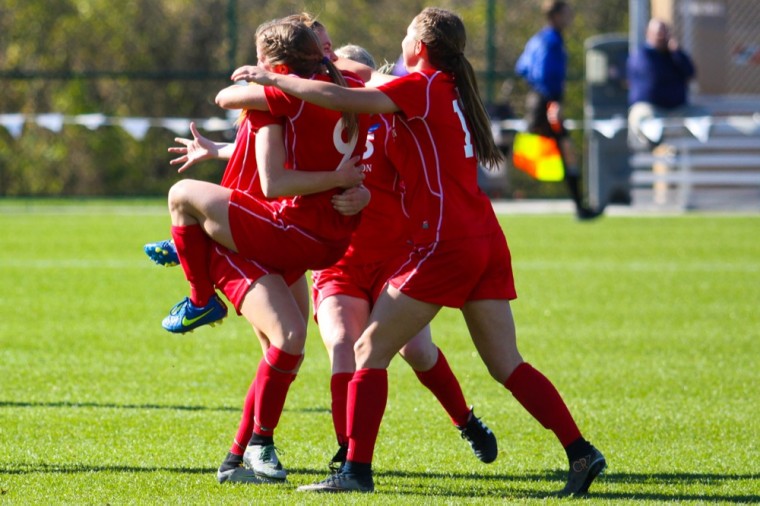 Statistically, Friday’s semifinal opponent represented the tougher matchup for the Bears. Messiah (22-0-3) entered the final weekend of the tournament as the clear favorite to win the national title, as the Falcons boasted a 17-0 goal differential in the postseason, the best goals-against average in Division III and a forward with more individual goals than 228 other teams in the country.

But all of the fancy stats and trivia in the world meant nothing when the Falcons could not get the ball past Lizzy Crist.

The Wash. U. goalkeeper had already put together an impressive junior campaign before the semifinal, posting a school-record-tying 11 shutouts and combining with the Bears’ stout defense to allow just one goal in 13 games since the end of September.

But Crist played at another level against Messiah, tallying a medley of highlight-reel stops and saving the Bears’ season in penalty kicks. After the Bears fell behind 1-2 through the first two rounds of the shootout, Crist stonewalled the Falcons for three straight saves, including one in the fifth round when a Messiah goal would have ended the game.

For her performance in the final two matches of the tournament, Crist was named the NCAA Championship Most Outstanding Defensive Player.

“Back-to-back-to-back saves is almost unheard of at any level,” Conlon said. “To have the mental fortitude to forget about the last play and go onto the next play is just a credit to her and how well she can compartmentalize the moment when she is on the field.”

Prior to the start of Saturday’s championship game, fans show their support for the women’s soccer team. Many of these fans tooks buses from Wash. U.’s campus to Swope Soccer Village on Friday and Saturday mornings and enjoyed tailgates, Kansas City barbecue and free game tickets as they cheered on the team.

Crist didn’t save all her heroics for the shootout, though. Just more than a minute into the match, a Messiah volley off a free kick sent a bouncing ball toward the right side of the net that stopped only after a near-full extension from Crist.

And in overtime, Crist stuffed Messiah’s Nikki Elsaesser, the country’s second-leading scorer, on a breakaway opportunity.

“I saw a breakaway was coming, so I did what I was trained to do and came out trying to be as big as possible and kind of threw my body in front of it,” Crist said.

She also received some help from her defensive mates. In the 53rd minute, freshman forward Darcy Cunningham prevented Messiah from doubling its lead to 2-0 with a header save at the goal line, and junior back Megan Nicklay, tasked with a one-on-one assignment guarding Elsaesser, held her charge to five shots, only one on target.

“Nikki Elsaesser has to be the greatest forward we have seen all season,” Conlon said. “Nicklay and her just had battle after battle today, and Nikki obviously won a couple and we’re just happy that Megan won a couple.”

But Crist’s impression of a brick wall wasn’t enough to hold Messiah scoreless the whole match. In the first half, the Falcons looked very much like the team that had stampeded its way through the first four rounds of the tournament, and they finally broke through in the 41st minute, when senior Holly Burgard lofted a shot into the upper left corner of the net for the lead.

Down a goal that came late in the first half, it was a near-identical script to the Williams match. However, on Friday, the Bears had an answer. In the 74th minute, Chandler sent a touch pass in the box from Renken into the bottom right corner of the net for the equalizer. Before the shot even hit nylon, Chandler clapped and spun down to one knee in celebration.

“You’ve got to keep fighting and keep putting opportunities in the mix and in that final third,” Chandler said of her eighth goal of the season. “When you start getting down to the last 25 minutes, you think about your season and everything ending…We all were on the same page and ended up pressing really hard in the final 25 minutes and ended up getting a goal out of it.”

Junior goalkeeper Lizzy Crist makes one of her five saves during Friday’s semifinal match. With an additional seven saves during the championship, Crist was named the tournament’s defensive MVP.

After Chandler’s tying goal and Crist’s subsequent save in overtime, the game went to penalty kicks, where the Bears overcame some jitters at the stripe and emerged from the tense shootout round victorious.

Shooting fourth, senior Liz Collins provided an upper-left-corner boot to even the score at two apiece, and a trio of Crist saves sent the shootout to a sudden-death sixth round. Junior back Hannah Rosenberg nonchalantly chipped a shot into the upper-left corner, and Messiah’s sixth shooter sent her ball high. The dead silence that preceded the final kick was shattered with elated screams.

“[Messiah] pressed us to every limit we had,” Conlon said.

In the 110-minute game, eight Wash. U. players saw the field for 80 minutes or more. Couple that with the high-stress nature of the semifinal contest and the exhaustive back-and-forth passing from the Ephs midfield the next day, and the Bears’ fatigue could have reached a limit too. The players, however, quickly downplayed that idea.

“I think everyone was fit and ready for the game today. Everybody was pumped up and excited and adrenaline really pushed us through,” senior back Sam Ezratty said.

Since the Washington University athletic department won its first national title in volleyball in 1989, the Bears have captured 19 NCAA trophies. But since the women’s cross-country team won it all in 2011, the Wash. U. trophy case has become a little dusty. The 2015 women’s soccer team is one of several that have made deep tournament runs over the past four years, but so far, none has been able to step into the winner’s circle. It’s a rare lull for one of Division III most decorated programs.