Washington University’s women’s soccer team is in the midst of a run of sustained success almost unparalleled in the current Division III climate. Since 2011, the Bears have won three titles in one of the country’s most competitive conferences, they’ve placed four players on the national All-American squads and they’ve combined for a robust 88-14-4 record in that span.

But there’s one glaring omission on the team’s recent resume: Wash. U. has lost in the Division III tournament quarterfinals in three of the past four seasons and hasn’t reached the Final Four since 2009.

The Bears seek a return trip, but they’ll have to beat a pair of ranked opponents to do so. Wash. U. plays in the sectional round on Saturday at 11 a.m. and, if they win, they’ll return to the field on Sunday at 1 p.m.

The Bears’ first match on the Francis Field turf will be against No. 22 Wartburg College (15-4-3). If the Red & Green can navigate past the Knights, they will face the winner of No. 7 Illinois Wesleyan University (IWU) (20-2) and No. 23 University of Wisconsin-Whitewater (19-4).

Get ready for a slate of sectional soccer fun with our weekend primer: 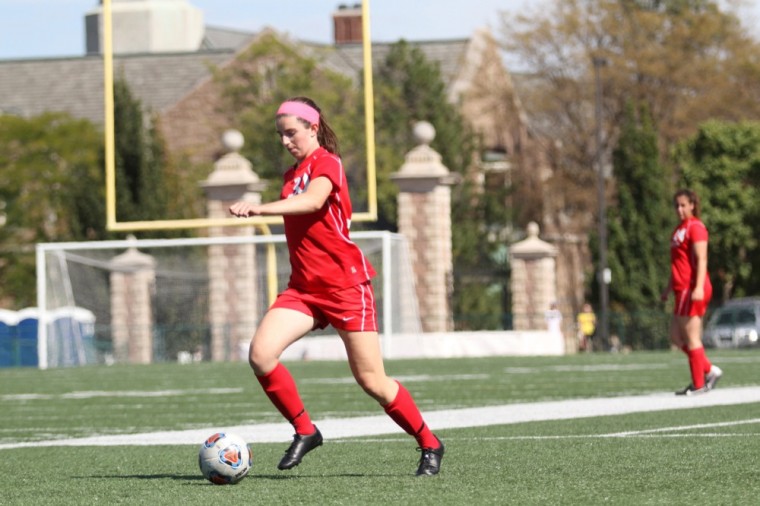 Freshman Caroline Dempsey plays in the Bears’ game against Illinois College in September. The women’s soccer team is moving on in the NCAA playoffs to face Wartburg College in the Division III Semifinals.

HOW DID THEY GET HERE?

All four teams in Wash. U.’s section posted stingy defensive performances to open the tournament—through two rounds, not one of those teams has surrendered a goal this postseason. Wash. U. battered York College (Pa.) 4-0 in the first round before sneaking by host Denison University 1-0 the next day.

Elsewhere, Wartburg upset undefeated University of Puget Sound in penalty kicks to qualify for the third round, and IWU and Wisconsin-Whitewater secured two victories apiece at home.

By virtue of its high regional ranking, Wash. U. drew the hosting card, giving the Bears the opportunity to clinch a Final Four berth in front of a home crowd.

The Bears defeated Wartburg at Francis Field in September, with senior forward Olivia Lillegraven scoring twice in a 48-second span to give Wash. U. the 2-1 victory.

Wash. U. controlled the run of play in that game, peppering the Knights’ goal with 15 shots (eight on target), while the visitors managed only four attempts on net (three on target).

But Wartburg has boosted its level of play since that early season loss, and the Knights enter the weekend on a 10-game unbeaten streak.

The Knights rely on a potent combination of a versatile offense and stout goalkeeping. Five Wartburg players have scored at least five goals this season, and among Division III goalies with at least 50 saves this season, Wartburg keeper Beth Crow has the 14th-best save percentage. Wash. U. junior Lizzy Crist ranks second by that measure.

One item of caution for Wash. U. is Wartburg’s success on penalty kicks. The Knights were perfect on five penalty shots in the regular season and followed that up with victories in end-of-game shootouts both against Puget Sound and in their conference title game earlier this month.

That could drudge up bad memories for the Bears: While hosting a quarterfinal match in 2013, Wash. U. suffered an upset defeat in a shootout just one round from the Final Four.

IWU enters its sectional match as the favorite to advance past Wisconsin-Whitewater after beating the Warhawks earlier in the season. A potential Bears-Titans quarterfinal would mark, well, a titanic clash of I-55 rivals.

Wash. U. boasts a five-game winning streak against IWU, including a 1-0 home victory earlier this season when junior forward Katie Chandler scored the game’s lone goal late in the second half. In that game, just like against Wartburg, the Bears’ defense stifled the opposing attack, surrendering just two shots on target.

Wash. U. has allowed just one goal—off a free kick in double-overtime on the road—since September, and the team’s current scoreless streak spans 572 minutes. And the Bears have been shutting down powerful offenses: More than half of their opponents over that span averaged more than two goals per game this season.

The defense plays conservatively, strangling opposing attacks by dropping midfielders back in support and relying on an entrenched and experienced back line. And beyond those defenders waits Crist, who ranks second in school history in goals-against-average.

The old maxim applies: It’s hard to lose when you don’t allow the other team to score.

Chandler’s goal to beat IWU in the team’s regular-season matchup was a rarity for the junior forward early in the season. After tallying 17 goals across her first two seasons with the team, Chandler managed just three scores before Halloween weekend this year.

But alongside that holiday’s demons and ghouls, Chandler’s offense awoke, and she has found the back of the net four times in the five games since. She started her surge with two double-overtime winners, including a score to upset then-No. 3 Carnegie Mellon University, and continued the hot streak with goals in each of the two tournament games last week.

Lillegraven is the focal point of the offense and should command much of the defensive attention going forward, but if Chandler can maintain her current pace, the Bears will be better positioned to break down the formidable defenses they’ll face this weekend.

Chandler’s importance to the team can be summed up simply: Wash. U. is undefeated this season when she scores a goal.

And if that streak continues, the Bears will be back in the Final Four.