Points may have been scarce, but to paraphrase John Madden, all you need to win is score more than the other team. The No. 6 ranked Washington University women’s soccer squad did just that, upending local rival Fontbonne University 1-0 on Thursday evening at Francis Field. 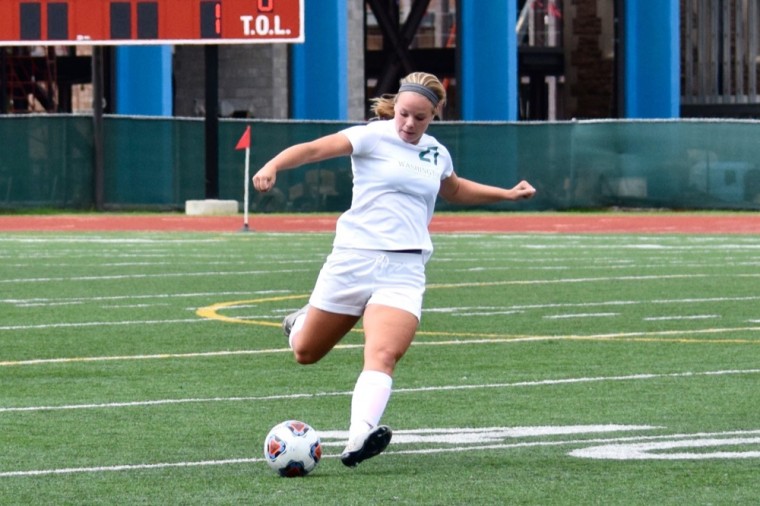 Sophomore forward Rachel Mickelson takes a shot on goal in the Bears’ game against Wartburg College on Sept. 11. Mickelson scored the only goal in this week’s game against Fontbonne University, leading the Bears to a 1-0 victory on Thursday.

“It was great to get a goal in, but I think this was more demonstrative of the way the team is playing right now,” sophomore forward Rachel Mickelson, who scored the only goal of the game, said. “Any player here can score, but it is up to all of us to help one another by setting each other up and getting opportunities. This is what coach [Jim Conlon] preaches in practice, and when we apply this team-first approach, we are a very good team.”

“It is always nice to get a win, but at the same time we cannot get complacent,” head coach Jim Conlon said. “We still have to improve in many areas, but this team is smart and determined. I’m confident this team can fix their mistakes.”

Despite the win, the Red and Green’s offense did not find many chances, as they only recorded two shots on goal, the team’s lowest total of the season. Despite the lack of offensive firepower, the defense, led by senior back Sam Ezratty and senior goalkeeper Amy French, did the Griffins one better, holding them to a lone shot on goal.

“There will be days when shots are flying left and right, and then there are days where you have to make every shot count,” Conlon said. “Tonight was one of those games where we had limited opportunities, but we were still able to persevere. Though the offense did not have their best game, our defense was tough and really helped us stay in the game. At this point in the season, we cannot afford to take breaks; everyone has to be focused and ready to fight.”

The win puts the Wash. U. at 13-2 on the season, marking the seventh time the team has collected at least 13 wins in Conlon’s eight seasons. The Bears now have an 18-0 record all-time versus Fontbonne, outscoring the Griffins 90-3 in those games. The defense posted their ninth shutout of the season, preserving the team’s unbeaten record at home thus far.

The win is also a much-needed rebound for the Red and Green coming off a tough 1-0 overtime loss in against No. 10 Brandeis College, which snapped a 10-game winning streak.

The Bears are still 3-1 in UAA play, tied with No. 19 University of Chicago for second place in the conference standings. With three crucial conference games remaining in the regular season. Wash. U.’s next game is at home on Friday, Oct. 30 against an undefeated No. 3 Carnegie Mellon University squad. With a win, the Bears would move into a first place tie in the UAA with the Tartans.