After earning a pair of road victories this weekend, the No. 7 Washington University women’s basketball team now have a chance to claim the greatest regular-season prize: the UAA title and an automatic bid to the NCAA tournament. 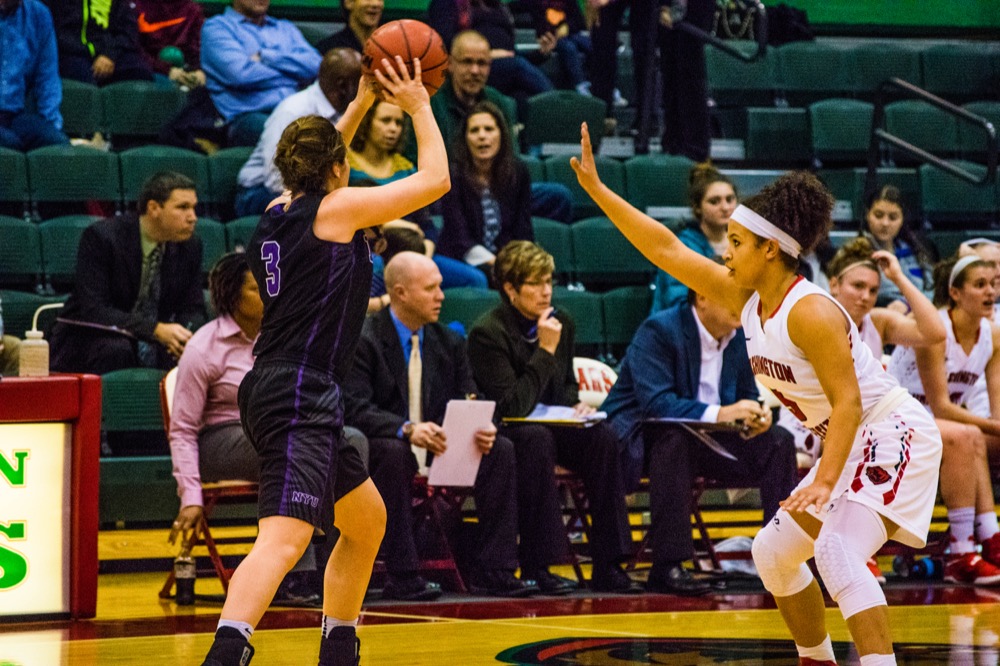 Becca Clark-Callender guards a NYU player during the Bears’ game aganist NYU on Jan. 20. The team looks to secure the UAA title and an automatic bid to the NCAA tournament next weekend.

With a perfect weekend, the Bears (22-2, 11-2 UAA) extended their winning streak to 10 games and set up a de facto UAA championship game with the University of Chicago (18-6, 11-2 UAA) next weekend. The two rivals will take the court next Saturday at the Field House, with the Red and Green looking to avenge a 75-68 loss earlier in the season.

Facing an NYU team they previously defeated by 32 points, the Bears took nothing for granted in Friday’s rematch, especially on the defensive end. The Red and Green held the Violets to 25 percent shooting en route to a season-low 37 points allowed.

After jumping out to an 8-5 lead, Wash. U. tallied the final 16 points of the first quarter to build a commanding 24-5 lead. The Bears’ stingy defense carried over into the second quarter as they forced seven turnovers and conceded only five shot attempts and no field goals in the 10-minute period, culminating in a 39-9 halftime advantage. Overall, the Bears limited NYU to just 10.1 percent shooting from the field in the first half.

“They missed some open shots, but we knew their offense pretty well and we stayed in front of the ball, which is something we’ve been working on all season,” senior Zoe Vernon said. “There weren’t very many places to pass the ball and we got a lot of deflections.”

In the second half, head coach Nancy Fahey rested most of the starters and allowed bench players to close out the blowout 66-37 victory. Junior Natalie Orr led the team with 16 points on 7-of-10 shooting, while sophomore Madeline Homoly added 15 points and six rebounds off the bench. Including the 12 points she scored against Brandeis this weekend, Homoly has scored in 10 straight games.

The dominant victory, coupled with a UChicago win at Brandeis, meant that the Bears would at least play for a share of the UAA crown next week. But first, however, the Red and Green had to focus on taking care of business against a more physical Brandeis team.

“Coach Fahey does a great job making sure we understand that we have to be ready for every game. We have to make sure that we’re playing hard and taking advantage of their physicality, so we’re focused on setting hard screens to get open,” Vernon said.

The first half, however, showed that taking advantage of Brandeis’ interior presence was easier said than done. Brandeis held an 18-2 edge in points in the paint and won the battle of the boards with a 17-11 rebounding advantage to claim a 31-26 halftime lead.

Nonetheless, it was Vernon who fueled the Bears’ second-half comeback by scoring 11 of her team-high 17 points. Normally a secondary weapon for Wash. U. beyond the arc, the senior forward nailed a career-high five three pointers on seven attempts.

On defense, the Red and Green limited Brandeis to a 20.7 shooting percentage, including 1-of-12 shooting from range. Through a fortifying shot defense, the Bears gained a 24-17 rebounding advantage in the second half and pulled away for the 12-point victory

A successful defensive weekend is a good sign for a Wash. U. team that struggled to contain Chicago shooters back in January. In that game, the Maroons shot 44.3 percent from the field and hit eight of nineteen three pointers.

When the Bears face Chicago on Saturday, they’ll have a chance to secure their fourth-straight UAA championship. It would be the longest such streak since the Red and Green captured four straight titles from 1992-1995.